Carrying on a Nearly Fifty Year Tradition, Scientists Examine the Intersection of Pollution and Marine Life 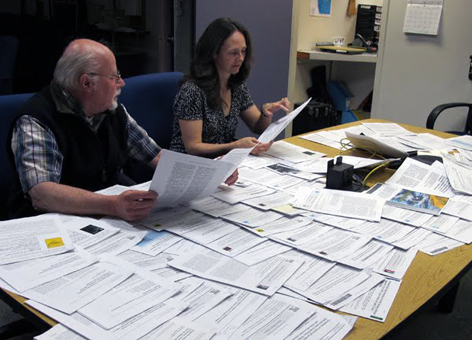 NOAA Office of Response and Restoration biologists Alan Mearns and Nicolle Rutherford tackle another year's worth of scientific studies, part of an effort begun in 1967. (NOAA)

NOVEMBER 14, 2014 -- As reliably as the tides, each month biologist Donald J. Reish would wash over the library at California State University, Long Beach, armed with stacks of 3x5 index cards.

On these cards, Reish meticulously recorded every scientific study published that month on pollution's effects on marine life. When he began this ritual in 1967, this did not amount to very many studies.

"There was essentially none at the time," says Reish, who helped pioneer the study of pollution's impacts on marine environments in the 1950s.

Nevertheless, after a year of collecting as much as he could find in scientific journals, he would mail the index cards with their handwritten notes to a volunteer crew that often included his former graduate students, including Alan Mearns, now an ecologist with NOAA’s Office of Response and Restoration.

Like a wave, they would return to the library to read, review, and send summaries of these studies back to Reish. At his typewriter, he would compile the individual summaries into one comprehensive list, an "in case you missed it" for scientists interested in this emerging field of study. This compilation would then be published in a scientific journal itself.

By the early 2000s, Reish handed off leadership of this annual effort to Mearns, an early recruit to the project. Today, Mearns continues the nearly 50 year tradition of reviewing the state of marine pollution science and publishing it in the journal Water Environment Research.

Their 2014 review, "Effects of Pollution on Marine Organisms," comes together a little differently than in the 1960s and 70s—and covers issues that have changed with the years as well. 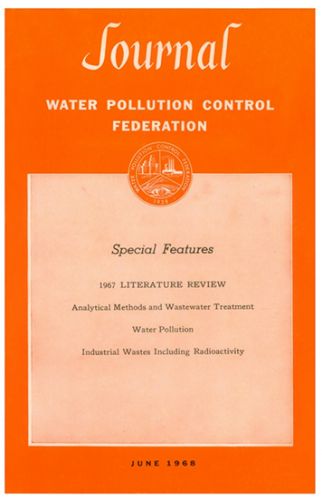 The cover of the Journal, Water Pollution Control Federation, in June 1968. This issue had Reish’s first literature review of pollution’s effects on marine life. The journal would later go by the name “Water Environment Research.”

Signs of the Times

For starters, vastly more studies are being published on marine pollution and its environmental effects. For this year’s publication, Mearns and his six co-authors, who include Reish and NOAA scientists Nicolle Rutherford and Courtney Arthur, reviewed 341 scientific papers which they pulled from a larger pool of nearly 1,000 studies.

The days of having to physically visit a library each month to read the scientific journals are also over. Instead, Mearns can wait until the end of the year to scour online scientific search engines. Emails replace the handwritten 3x5 index cards. And fortunately, typewriters are no longer involved.

The technology the reviewers are using isn't the only thing to change with the years. In the early days, the major contaminants of concern were heavy metals, such as copper, which were turning up in the bodies of fish and invertebrates. Around the 1970s, the negative effects of the insecticide DDT found national attention, thanks to the efforts of biologist Rachel Carson in her seminal book Silent Spring.

Today, Mearns and Reish see the focus of research shifting to other, often more complicated pollutants, such as nanomaterials, which can be any of a number of materials roughly 100,000 times smaller than the width of a human hair. On one hand, nanotechnology is helping scientists decipher the effects of some pollutants, while, on the other, nanomaterials, such as those found in cosmetics, show potentially serious effects on some marine life including mussels. 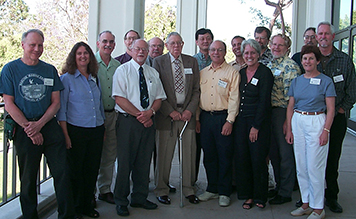 Reish often relied on his former graduate students, including NOAA's Alan Mearns, to help review the many studies on marine pollution's effects each year. Shown here in 2004, Reish (seventh from left) is surrounded by a few of his former students who gathered to honor him at the Southern California Academy of Sciences Annual Meeting. Mearns is fifth from left and another contributer, Phil Oshida of the U.S. Environmental Protection Agency, stands between and behind Mearns and Reish. (Alan Mearns)

Another major trend has been the evolution of the ways scientists evaluate the effects of pollutants on marine life. Researchers in the United States and Western Europe used to study the toxicity of a pollutant by increasing the amount animals are exposed to until half the study animals died.

In the 1990s, researchers began exploring pollutants' finer physiological effects. How does exposure to X pollutant affect, for example, a fish's ability to feed or reproduce?

Nowadays, the focus is even more refined, zeroing in on the molecular scale to discern how pollutants affect an animal's genetic material, its DNA. How does the presence of oil change whether certain genes in a fish's liver are turned on or off? What does that mean for the fish?

A Year of Pollution in Review

With three Office of Response and Restoration scientists working on this effort, it unsurprisingly features a lot on oil spills and marine debris, two areas of our expertise.

Of particular interest to Mearns and Rutherford, as oil spill biologists, are the studies of biodegradation of oil in the ocean, specifically, how microbes break down and eat components of oil, especially the toxic polycyclic aromatic hydrocarbons (PAHs). Scientists are examining collections of genes in such microbes and determining which ones produce enzymes that degrade PAHs.

"That field has really exploded," says Mearns. "It's just amazing what they're finding once they use genomics and other tools to go into [undersea oil spill] plumes and see what these critters are doing and eating."

Marine debris research in 2013 focused on the effects of eating, hitchhiking on, or becoming entangled in debris. Studies examined the resulting impacts on marine life, including sea birds, fish, crabs, turtles, marine mammals, shellfish, and even microbes. The types of debris that came up again and again were abandoned fishing gear and plastic fragments. In addition, quite a bit of research attempted to fill in gaps in understanding of how plastic debris might take up and then leach out potentially dangerous chemicals. 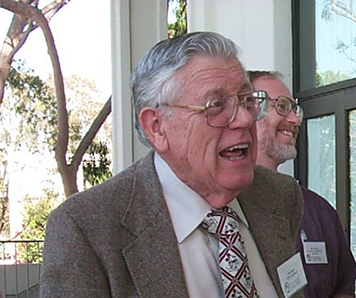 Don Reish, marine biologist and retired professor at California State University, Long Beach, helped pioneer the study of pollution’s effects on marine life in southern California. He began an annual review of studies on this topic in 1967 and handed over leadership on the project to NOAA’s Alan Mearns in the early 2000s. (Alan Mearns)

Perhaps the most significant change over the decades has been a change in attitudes. Reish recalled a presentation he gave at a scientific meeting in 1955. He was discussing his study of how marine worms known as polychaetes changed where they lived based on the effects of pollution in southern California.

Afterward, he sat down next to a professor from another college, whose response to his presentation was, "Don, why don't you go do something important?"

In 2014 attitudes generally skew to the other end of the spectrum when it comes to understanding human impacts on our world and how intertwined these impacts often are with human well-being.

And while there is a lot of bad news about these impacts, Mearns and Reish have seen some bright spots as well. Scientists are starting to observe slow declines in the presence of toxic chemicals, such as DDT from insecticides and PCBs from industrial manufacturing, which last a long time in the environment and build up in the bodies of living things, such as the fish humans like to catch and eat.

The end of the year is approaching and, reliably, Mearns and his colleagues are again preparing to scan hundreds of studies for their annual review of the scientific literature. Reflecting on this effort, Mearns points out another benefit of bringing together such a wide array of research disciplines. It encourages him to cross traditional boundaries of scientific study, enriching his work in the process.

"For me, it inspires out-of-the-box thinking," says Mearns. "I'll be looking at wastewater discharge impacts and I'll spot something that I think is relevant to oil spill studies...We can find out things from these other fields and apply them to our own."