FEBRUARY 20, 2014 -- Freezing temperatures and blackened piles of snow along the Chicago streets were the backdrop to the American Association for the Advancement of Science (AAAS) Annual Meeting on February 13–17. Alongside the thousands of scientists, journalists, and other professionals, the Office of Response and Restoration's Vicki Loe was there mostly to learn about the latest technology and trends in science communications, but was pleased to discover that the need for better communication was a theme throughout this science conference, even in sessions that had little to do with communications per se.

Highlighted in the science communication seminars were differences in how today's audiences receive information and how changing technology plays into that. In the symposium, "Communicating Science: Engaging with Journalists," Carl Zimmer, science writer at the New York Times, talked about how scientists are now able to post their papers directly to field-specific archive sites, which, rather than being restricted to small and specific audiences, are available for anyone to see not only the paper but the subsequent comments and discussion. This represents a huge change from the older model for scientific journal articles, which are critiqued by other scientists in that discipline ("peer reviewed") before being published, instead of after. The upside of this, according to Zimmer, is that it is easier for journalists to find information on new developments from papers on these "pre-print servers." The downside is the possibility that the information is not yet valid to report. David Baron, another panelist and science editor for PRI’s "The World" radio podcast, sees a bigger role for science foundations as alternative sources for finding objective information. Robert Lee Hotz, science writer at the Wall Street Journal, talked about the span of what he calls the "digital age," starting with Steve Jobs and Steve Wozniak introducing the Apple II computer in 1977, to the advent of 24/7 news in 1987, to the mass availability of free news via the Internet at present. He pointed out however, that there are roughly the same amount of professional science journalists in this country now as then—40,000, a fact which indicates to him that despite increased availability of news sources, "more and more people are getting less." At the same time as these changes in coverage are happening at traditional media, many people have stopped going to traditional media for news. This trend has created opportunities for alternative science news models, demonstrated by the creation of 172 non-profit online news sites since 1980, including ProPublica, the Yale Center for Environmental Law and Policy newsletter, and InsideClimateNews. David Baron advocates a storytelling approach to communicating about science issues, as audiences are more likely to be engaged longer by a narrative style. He cited a recent episode about climate change on the radio program This American Life. Instead of just presenting facts and figures, the narrative follows Nolan Duskin, state climatologist of Colorado, as he talks with ranchers at a farm conference to illustrate the challenges of climate change in the context of everyday life. Paula Apsell, Senior Executive Producer of NOVA at WGBH Boston, sees more choices on TV but less science now than in the past, and describes the NOVA of today as not just a popular science TV series but a broader media brand extending online. The majority of NOVA consumers are going to the online archives from search. This is consistent with the current expectation for media to be on more platforms all the time. The challenge, according to Apsell, is to alter the style to these other platforms without "dumbing down" the substance. With so much information now available on the Web, there are also increased opportunities for error. As a result, Apsell emphasized the need for skepticism when researching science stories and rigorous cross-checking. 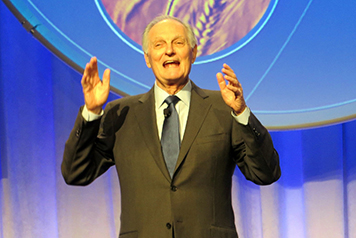 Plenary speaker (and M*A*S*H star) Alan Alda discussed science communication, which he teaches at Stony Brook University, to an audience of about 1,500 at the AAAS Annual Meeting in Chicago on February 15, 2014. (Alan Kotok/Creative Commons Attribution 2.0 Generic License)

From Loe's perspective as a science communicator, the highlight of the conference was "Getting Beyond a Blind Date with Science," a plenary session presented by Alan Alda, actor and the director of the Alan Alda Center for Communicating Science at Stony Brook University in New York. The Center grew out of Alda's interest in science and 12 years of experience hosting the show Scientific American Frontiers on PBS, which he calls "the best thing I ever did in front of a camera." Alda is also well known for his role as Captain Pierce in the 1970s TV series M*A*S*H (1972-1983). However, his work on Scientific American Frontiers convinced him that while many researchers have fascinating stories to tell, they are deeply involved in the complexities of their work, which can inhibit their ability to effectively communicate to non-scientists. He uses the phrase "curve of knowledge" to describe "when you know something so well that you forget what it is like to not know it." Alda compares the stages of a blind date to the steps in building a relationship with the audience in order to communicate science effectively. When a couple first meets, there is a deficit of trust before they begin to know one another. In the attraction stage, body language and tone are more important than language. The next stage, infatuation, incorporates emotion and memory. Finally, commitment is the stage where both parties are listening to and understanding each other. He asks his scientist students to keep focusing on what it is about their work that they wish people could understand clearly. They do improvisation to learn to tell their stories in a more personal and engaging way, using emotion to create a memory.

Science Needs to Get Social

On the last day at the conference, Loe attended a multidisciplinary presentation about satisfying food demands for the over 9 billion people expected to inhabit the Earth by 2050—and how we will accomplish this despite climate change, land degradation, and loss of environmental resources. The panel discussion was moderated by Dr. Kathy Sullivan, Acting NOAA Administrator. During the discussion, panelist Dr. Paul Ehrlich of Stanford University underscored the need for societal understanding of these growing challenges. He emphasized that this problem isn't a new one: scientists have been warning about global resource shortages in the face of a growing population, climate change, and depleted resources since the 1960s. The problem, he says, is that people still do not understand the implications of these issues for the future and he predicts that social science will need to play a much larger role if society is to take the actions necessary to alleviate these growing pressures on our planet For more information on the conference, visit the AAAS 2014 Annual Meeting website. 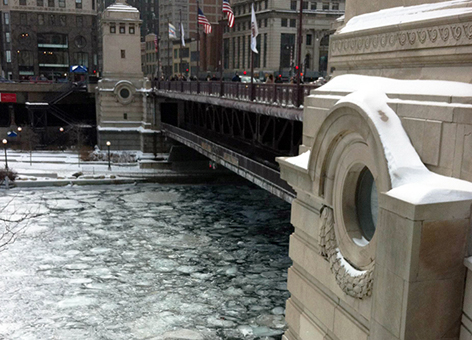 The frozen Chicago River outside of the AAAS Annual Meeting. (NOAA) 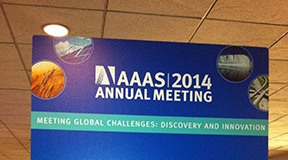