On the Chesapeake Bay, Overcoming the Unique Challenges of Bringing Restoration to Polluted Military Sites

AUGUST 20, 2014 -- Transformations are taking place at more than 10 government facilities, mostly owned by the Department of Defense, across the Chesapeake Bay and its tributaries. These properties typically include large, relatively undisturbed natural areas, which often serve as key habitats for endangered fish, birds, and wildlife. Yet the same federal facilities also have become Superfund sites, slated for cleanup under CERCLA, with pollution at levels which threaten the health of humans and the environment. Yet in spite of some unique challenges, these areas are being cleaned up and restored to become healthy places for all once more. Success has stemmed largely from two critical pieces of the process: collaborating closely among numerous government agencies and incorporating restoration into the process as early and often as possible. According to Paula Gilbertson of the U.S. Navy, "The close partnership among the many federal and state agencies involved has provided a framework for success. Great things can happen when people work together toward a common goal."

Moving Past the Past

Past activities leading to pollution at U.S. Army, Air Force, and Navy sites on Chesapeake Bay were many and varied, and included: incineration, landfilling, ship and airplane repair and maintenance, military testing, and pesticide and munitions disposal. As a result, beginning in the 1980s, entire facilities along the bay became Superfund sites and listed for priority cleanup. Typically during the Superfund process, the party responsible for polluting has to work with the U.S. Environmental Protection Agency (EPA), which leads the cleanup, and other state and federal agencies—known as trustees—which represent affected public lands and waters. But in these cases, the Department of Defense has to play multiple roles: trustee of natural resources on the property, entity responsible for contamination, and lead cleanup agency. In addition, the EPA still oversees the effectiveness of the Superfund cleanup, and the military branches at each site still have to coordinate with the other trustees: NOAA, the U.S. Fish and Wildlife Service, and state agencies. NOAA and the Fish and Wildlife Service also are part of a special technical group run by the EPA (the Biological Technical Assistance Group, or BTAG), which coordinates trustee participation and offers scientific review throughout the ecological risk assessment and cleanup process at each site. According to Bruce Pluta, coordinator of the EPA BTAG, "The collaborative efforts of the EPA Project Team, including the BTAG, and our partners at the Department of Defense have resulted in model projects which integrate remediation and ecological restoration."

Working Together for the Future

What does not change during this process is that the trustees are working to protect and restore the "trust resources," including lands, waters, birds, fish, and wildlife affected by contamination coming from these military sites. This can include natural areas adjacent to the sites and the animals that could migrate onto the federal properties, such as striped bass, herring, blue crabs, eagles, and herons. Other important differences exist governing how all these government entities work together in the Superfund cleanup process. For example, NOAA often works to evaluate ecological risks and determine environmental injuries resulting from hazardous material releases at Superfund sites. Then we implement restoration projects to compensate for the injuries to coastal and marine natural resources and the benefits they provide to the public. This is the Natural Resource Damage Assessment process. NOAA seeks legal damages (payment) or works with those responsible for the pollution through cooperative agreements to restore, replace, or acquire the equivalent natural resources.

A site transformed: Immediately after completion of cleanup and restoration activities at a landfill on the Little Creek naval base on the Chesapeake Bay. (U.S. Environmental Protection Agency)

As federal trustees, we are significantly limited in our ability to conduct a formal damage assessment against a fellow federal agency doing cleanup because we are both trustees of the affected natural resources. However, all federal and state trustees can work together with EPA to protect the lands, waters, and living things during cleanup, maximize the potential for restoration at each site, and develop measures to ensure both environmental recovery and resilience. "By considering restoration early in the process and getting input from natural resource managers, many simple, common sense measures are being incorporated that benefit ecosystems, reduce overall costs, and improve the effectiveness of the cleanup," says Simeon Hahn of NOAA.

Having so many government agencies involved in overlapping but distinct roles requires a great deal of collaboration and communication. This became clear early in the process if each case were to achieve multiple objectives:

Despite the many challenges, the process of cleaning up and restoring these contaminated military facilities has been going well. EPA, the Department of Defense, and fellow trustees have collaborated to protect and restore affected natural resources while also helping adapt these areas to the threats and impacts of climate change. By integrating restoration into cleanup planning early and often, we have made significant progress toward a healthier Chesapeake Bay—at lower costs and in less time. 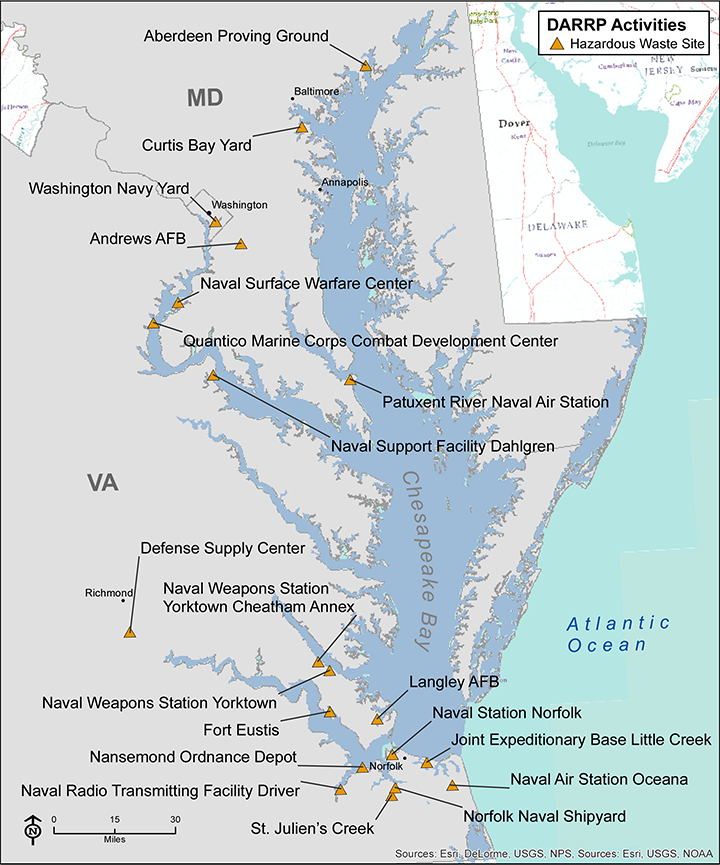 Over the coming months, we will be sharing more about these successes here. We will recount the removal and recycling of thousands of tons of concrete; the restoration of hundreds of acres of wetlands, shorelines, creeks, and forested areas; and the revitalization of numerous acres of land contributing to benefits such as natural defenses for coastal communities. Stay tuned! 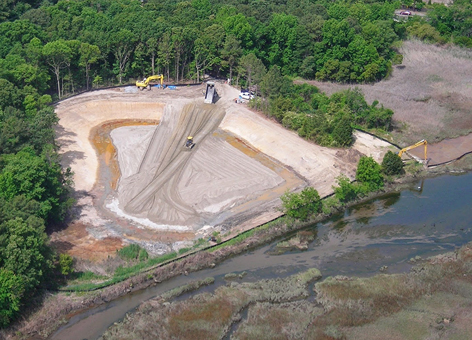 Naval Amphibious Base Little Creek, a major base for the Navy's Atlantic fleet, is one of the facilities that was slate for cleanup on the Chesapeake Bay. Here, heavy equipment prepare a former landfill for restoration post-cleanup in 2006. (U.S. Navy) 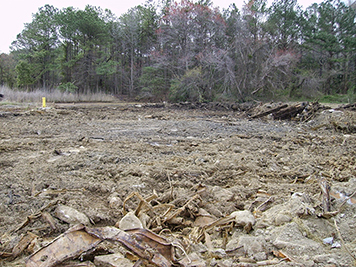 A landfill on the Little Creek naval base before cleanup in 2006. (U.S. Navy)
Back to top