Collecting Data from the Sky for Oil Spill Response

AUG. 8, 2016 — NOAA scientists use satellites, airplanes, helicopters, and drones to examine oil on the ocean’s surface. In June of this year, NOAA and the Bureau of Safety and Environmental Enforcement (BSEE) entered into an agreement to study how remote sensing could be used to look at oil on the surface of the water and develop two related studies to test the use of remote sensing for this work. The first study is a controlled experiment in what is essentially a large, very special swimming pool. BSEE operates a test facility in New Jersey, the National Oil Spill Response Research and Renewable Energy Test Facility, or Ohmsett . Ohmsett is an above-ground concrete test tank, one of the largest of its kind, measuring 203 meters long by 20 meters wide by 3.4 meters deep. The tank is filled with 2.6 million gallons of crystal clear saltwater. Ohmsett is located on the New Jersey coast, about an hour south of New York City.

Our experiments were designed to look at oil that had been left out in the open (weathered) but also oil battered by waves. Fresh oil is not stable and doesn’t last long in the ocean. With exposure to waves and weather, oil changes. As the oil mixes with water it can form emulsions. An emulsion is not unlike what you get by shaking oil and vinegar together to make salad dressing. After an oil spill at sea, the oil and water emulsions can continue to form and thicken over time. It is important for responders to know characteristics such as thickness of these oils and emulsions to plan their response. Thin oil and sheen can be difficult to clean up, but still cause harm to natural resources. Responders have more options when it comes to thicker oils, as they can be mechanically skimmed, for example. Our work at Ohmsett helps us to better understand how to characterize extent and relative thickness of oil on the surface ranging from sheens and thin oil to these thicker oils and emulsions.

Oil being released into the Ohmsett test tank. (BSEE)

To begin this experiment we first released 400 gallons of oil into the Ohmsett test tank on Thursday, July 14, 2016. We let the oil sit on the water and weather, the way the oil would naturally age if it was released into the environment. After five days we turned on the wave machine. Ohmsett is equipped with a sophisticated wave-making machine and water cannons that allow researchers to apply the real-world conditions of waves and currents to represent what we would face in the field. Over the next week, the team collected water and oil samples as well as oil thickness measurements taken within 30 minutes of satellite overpasses.

Octocopter drone flying over the Ohmsett tank with oil. (NOAA)

In addition to these on-water collections, helicopters, airplanes, and drones collected a variety of remote sensing data of the same oil slick. All of the image data as well as the oil and water chemistry data collected will be examined together to identify how we can use these tools to support our existing response and assessment programs. The chemistry data will tell us what the satellites and other sensors can “see”. When we can measure and know how thick oil is being “seen,” then we can use the sensors to “look” for oil and help us figure out how to best clean it up as well as to help us predict where the oil is going to go. We can see and measure these thin oils and emulsions with remote sensing. We know these techniques work but we are trying to determine the most effective way to use them. Using remote sensing can potentially save response time and keep spill responders out of harm’s way. Over the next several weeks, the project team will be reporting on our findings from the first study and preparing to conduct a similar effort in the open waters of the Gulf of Mexico, which represents the goal of the second study. Projects like this provide federal oil spill responders with an understanding of how to use these tools and technologies and in turn, to solve the real problems of rapid response and comprehensive assessment of damages caused by oil spills. 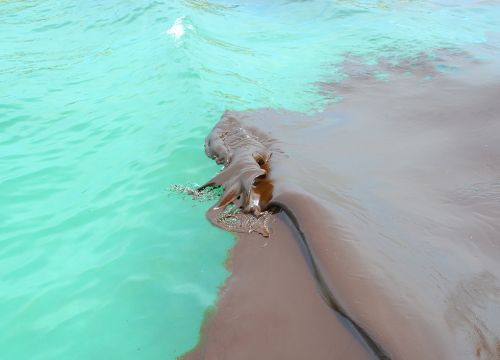 Heavy, thick oil emulsions created in the Ohmsett tank. (NOAA)
Back to top