Creative Solutions Save Money and Marsh Along Galveston Bay, Texas

MAY 4, 2016 -- Hazardous waste sites create a cascade of impacts that affect the health of communities, water quality, and the local environment. That's why the long-term cleanup and restoration of these sites often requires a coordinated—and creative—regional approach. This was certainly the case for the Malone Services Company hazardous waste site in Texas City, Texas. By combining efforts and funding in unexpected ways, federal, state and local partners came up with the most effective restoration solutions for the area, saving time and money along the way.

Located on the shores of Swan Lake and Galveston Bay, the 150-acre Malone facility produced decades of pollution affecting both groundwater within the site and runoff into nearby surface waters, creating long-term contamination problems for the region. Hundreds of businesses sent more than 480 million gallons of waste to the Malone facility for reclamation, storage, and disposal. During its operation from 1964 to 1997, waste products from those industries included acids, contaminated residues, solvents, and waste oils. Designated a Superfund site in 2001, state and federal agencies collaborated early on during the cleanup, investigating the extent of the contamination, assessing which natural resources were affected, and planning restoration solutions to make up for these impacts. By sharing information they all needed, the agencies avoided additional costs from performing independent studies. Officially called "trustees," the state and federal agencies involved included the Texas Commission on Environmental Quality, the Texas Parks and Wildlife Department, the Texas General Land Office, NOAA, and the U.S. Fish and Wildlife Service. Working together, the trustees carried out the Natural Resources Damage Assessment process for the Malone waste site. In 2012, they reached a settlement with the responsible parties for approximately $3.1 million. In the settlement, the trustees determined that Malone's pollution had significant negative impacts on natural resources, affecting upland-woodland, freshwater marsh, and saltwater marsh habitat around the Malone site. To restore those natural resources, the trustees finalized the damage assessment and restoration plan [PDF] in 2015. Key elements of the plan center on restoring nearby natural areas, including freshwater wetlands in Campbell Bayou, terrestrial woodlands in the Virginia Peninsula Preserve, and intertidal saltwater wetlands in Pierce Marsh.

Situated on the north shore of West Galveston Bay, not far from the Malone site, Pierce Marsh covers more than 2,300 acres, supports vibrant seasonal and year-round bird and fish populations, and is home to commercial and recreational fisheries. It is also located near vital, colonial water bird nesting islands and serves as an important feeding area during the nesting season. However, the marsh became completely flooded by the 1990s, compromising its habitat quality as the ground beneath it sank due to subsidence. “Pierce Marsh has experienced one of the greatest rates of wetland loss in Galveston Bay and the restoration of its fish and wildlife habitat is recognized as a regional restoration priority,” noted Jamie Schubert, NOAA Restoration Center Marine Habitat Specialist. The Galveston Bay Foundation, a co-owner of the land, has spent the last 15 years methodically restoring the marsh.

Left, an aerial view of the Malone Service Company site shows the proximity of wetlands and Galveston Bay. (Department of the Interior). Right, sediments pouring from the end of a long pipeline are raising the ground elevation of Pierce Marsh, improving habitat for birds and fish and helping make up for the loss of similar habitat due to pollution at the Malone waste site. (Credit: John Morris/Mike Hooks, Inc.)

Money from the Malone settlement is funding the restoration of 70 acres of wetland at Pierce Marsh. Having each federal and state agency contribute to a portion of the success—through the funding, planning, engineering, design, permitting, implementation, or monitoring—this restoration project has saved time and money. One cost-saving example came out of NOAA habitat conservation experts and U.S. Army Corps of Engineers project manager, Seth Jones, both serving on an Interagency Coordination Team for the Texas Gulf Intracoastal Waterway. The Corps maintains the waterway, dredging it deep and wide enough to meet current shipping demands. Out of those meetings emerged the idea to "beneficially" use the sediments from the waterway dredging to raise the level of Pierce Marsh. "Our project delivery team included NOAA, the Galveston Bay Foundation, Texas Parks and Wildlife, U.S. Fish and Wildlife Service, the Texas General Land Office, and the Texas Department of Transportation," said Jones. "It was because of their instrumental input throughout the design phase that we are going to get a good start on the Galveston Bay Foundation's long-term marsh restoration plan at Pierce Marsh complex." To pay for transportation of the dredged sediments to restore the marsh, the Texas trustees recommended that combined settlement funds from the Malone Services Company site, the Tex Tin hazardous waste site (also in the area), and another Texas state pollution case could help fund the needed restoration, yielding more restoration for their dollars. "This beneficial use project has multiple benefits—it keeps the dredged material away from existing seagrass areas in West Bay and helps restore lost wetland habitat that has disappeared over the last fifty years in this area," said Bob Stokes, President of Galveston Bay Foundation.

A Restoration Recipe for Success 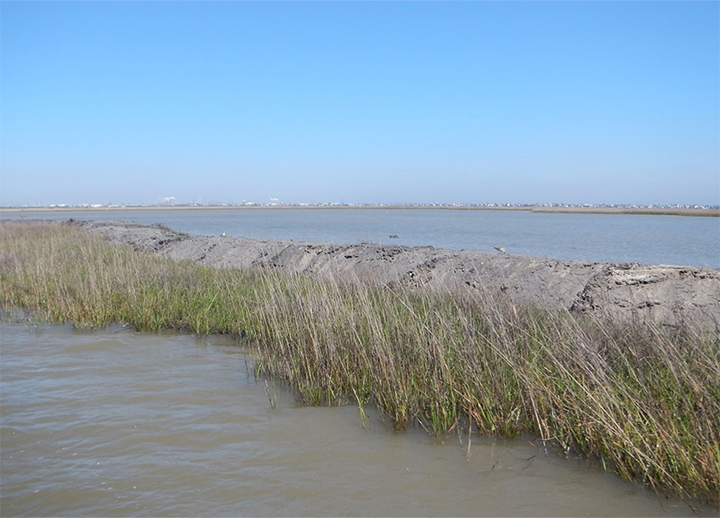 Members of the trustee council have expressed enthusiasm for the project as well. "The U.S. Fish and Wildlife Service is excited to be part of the Pierce Marsh restoration project, which will restore estuary marsh habitat and benefit migratory birds and waterfowl," said Benjamin Tuggle, Southwest Regional Director, U.S. Fish and Wildlife Service. "Multiple state, federal, and NGO partners have come together to restore contaminated areas at the Malone site." The Texas trustees anticipate building upon these efforts and using this approach to continue restoring coastal marshes, making ongoing monitoring of the project very important. They have partnered with Galveston Bay Foundation and Ducks Unlimited to monitor sediment settlement rates, which are used to assess project success and inform future projects. "The Pierce Marsh reclamation project will make a significant contribution to restoring the coastal wetlands and natural resources that have been lost over time in this part of West Galveston Bay," according to Richard Seiler, Program Manager of the Texas Commission on Environmental Quality Natural Resource Trustee Program. "The project represents a true team effort between the Texas Commission on Environmental Quality and the other state and federal natural resource trustees, the U.S. Army Corps of Engineers, and our NGO partners, the Galveston Bay Foundation and Ducks Unlimited." The restoration of Pierce Marsh is a success story of interagency cooperation and partner coordination. Federal and state agencies and non-profit organizations with differing missions came together on a project that would benefit everyone involved. Working together to share financial and technical resources, ultimately enabled them to use sediment historically viewed as waste material to restore vital coastal habitat, enhancing the area for wildlife and fisheries for generations to come. 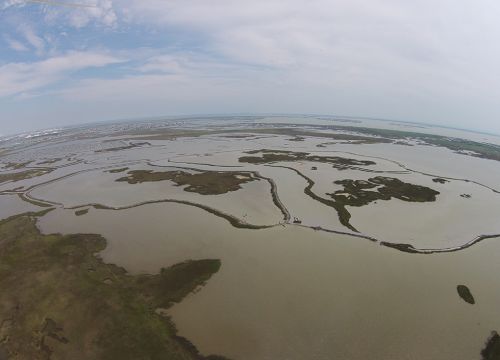 An aerial view of levee construction in progress at Pierce Marsh in Texas. The levees will contain dredged sediments transported from the Gulf Intracoastal Waterway. (Credit: John Morris/Mike Hooks, Inc.) 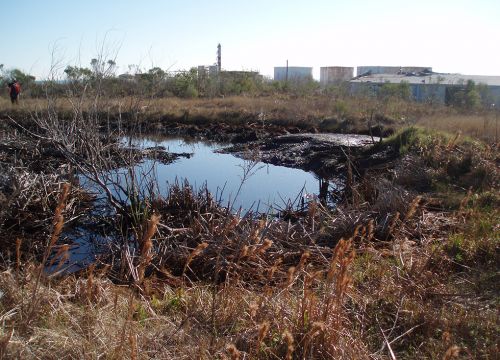 Oil pits were obvious and numerous prior to the cleanup of the Malone Services Company hazardous waste site, which began in 2014. (NOAA)
Back to top