Debunking the Myths about Garbage Patches

Are garbage patches really islands of trash that you can actually walk on?

Nope! Although garbage patches have higher amounts of marine debris, they’re not “islands of trash” and you definitely can’t walk on them. The debris in the garbage patches is constantly mixing and moving due to winds and ocean currents. This means that the debris is not settled in a layer at the surface of the water, but can be found from the surface, throughout the water column, and all the way to the bottom of the ocean. Not only that, the debris within the garbage patches is primarily microplastics, tiny plastic pieces less than five millimeters in size. Many of these microplastics are the result of larger plastic debris that has broken into small pieces from exposure to the sun, salt, wind, and waves. Others, such as microbeads from products like facewashes or microfibers from synthetic clothing, are already small in size when they enter the water. With such small debris items making up the majority of the garbage patches and the constant movement of this debris, it’s possible to sail through a garbage patch without even realizing it.

The Great Pacific Garbage Patch is the size of Texas and you can see it from space!

Not so much. Since the garbage patches are constantly moving and mixing with winds and ocean currents, their size continuously changes. They can be very large, but since they’re made up primarily of microplastic debris, they definitely can’t be seen from space.

Why don’t we just clean them up?

Unfortunately, cleaning up the garbage patches is complicated. Since the debris making them up is not only constantly mixing and moving, but also extremely small in size, removing this debris is very difficult. We generally focus removal efforts on our shorelines and coastal areas, before debris has the chance to make it to the open ocean and before they have broken into microplastic pieces, which are inherently difficult to remove from the environment. However, preventing marine debris is the key to solving the problem. If you think about an overflowing sink, it’s obvious that the first step before cleaning up the water on the floor is to turn the faucet off—that’s prevention. By working to prevent marine debris through education and outreach, and each doing our part to reduce our contribution, we can stop this problem from growing.

Want to learn more about the garbage patches?

Check out the NOAA Marine Debris Program website where you can find more information as well as our Trash Talk video on the Great Pacific Garbage Patch.

Read more articles on myths and misconceptions in spill response: Rescuing Oiled Birds, Leave it to the Experts Clean up spilled oil at all costs? Not always Restoration: The Other Part of Spill Response 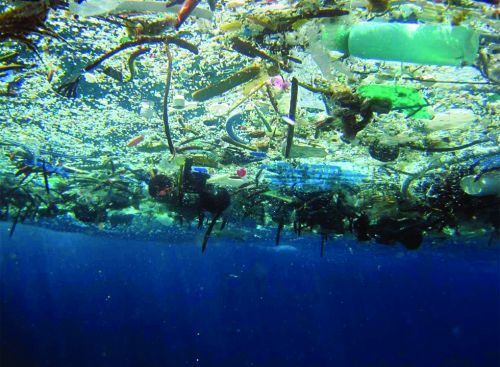 You may have envisioned the garbage patches looking something like this, but that’s pretty far from the truth. (NOAA)
Back to top