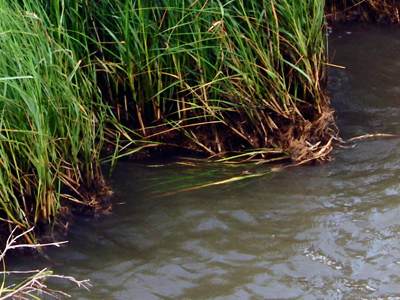 Louisiana marsh that was exposed to oil from the 2010 Deepwater Horizon/BP oil spill. (NOAA)

It can be implemented prior to the completion of the damage assessment process, which is important because this process is complex and can sometimes last many years.

For the Deepwater Horizon/BP oil spill, BP provided an unprecedented $1 billion for early restoration. This represents an initial step toward fulfilling the company's obligation to fund the complete restoration of natural resources impacted by the spill. It is an opportunity to help restoration get started sooner.

Examples of the types of projects that might be funded include:

Your input on this plan is important so that we can begin restoration of Gulf of Mexico resources injured by the Deepwater Horizon/BP oil spill. A 60-day public comment period will be open from Dec. 15, 2011 to Feb. 14, 2012. You can comment on the plan online or at one of the public meetings being held throughout the Gulf and in Washington, DC. The Final Plan will also be made available for public comment.

The trustees considered projects based on criteria laid out in federal and state regulations and in the agreement with BP. A series of draft early restoration plans will be developed outlining projects agreed to by the trustees and BP to be presented for public input. These draft plans will be finalized to ultimately form a Final Early Restoration Plan.

To read the draft restoration plans and submit a comment on them, please visit NOAA's Gulf Spill Restoration website.

The long-term damage assessment will continue while early restoration planning is under way. BP and the other responsible parties ultimately will be obligated to compensate the public for the entire injury and all costs of the natural resource damage assessment.