JANUARY 10, 2014 -- You can find the Indian River Power Plant situated along the shores of Indian River Bay in southern Delaware. This shallow body of water is protected from the Atlantic Ocean by a narrow spit of land to the east and is downriver of the town of Millsboro to the west. In December 1999, the power plant's owner at the time, Delmarva Power and Light, discovered a leak in an underground fuel line that over a decade had released approximately 500,000 gallons of oil. The fuel oil had leaked into the soil and groundwater beneath the plant. When the edge of the underground oil plume reached Indian River Bay, oil seeping from the shoreline impacted the fringe of salt marsh growing along the beach, as well as the shallow-water area a short distance offshore. In the cleanup that followed, about 1,000 tons of oily sediment were excavated from these marshes and replaced with a similar sand quarried from nearby. As part of the restoration, Delmarva replanted the area with hundreds of seedlings of smooth cordgrass (Spartina alterniflora) and other native plants common to the shores of Delaware's inland bays. But further restoration was needed to compensate for the environmental services lost during the period when the marshes were oiled. When the Office of Response and Restoration's Simeon Hahn took on this case in 2007 as a NOAA coordinator for the subsequent Natural Resource Damage Assessment, Slough's Gut Marsh had already been selected as the site of an additional restoration project on Indian River Bay. Slough's Gut Marsh, east of the James Farm Ecological Preserve near Ocean View, Del., is located on land owned by Sussex County and managed by the Delaware Center for the Inland Bays. The area was described to him as 24 acres of eroded and degraded salt marsh. After a lot of hard work, some innovative thinking, and five years of monitoring the results, he's pleased to report that Slough's Gut Marsh has been successfully restored. 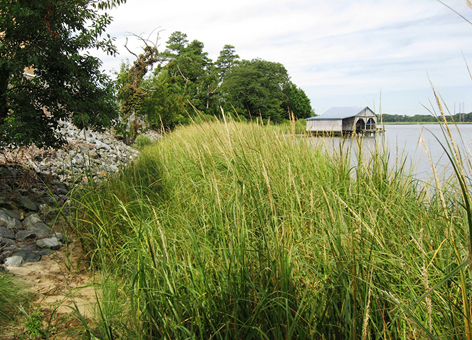 The restored shoreline near the Indian River Power Plant is now repopulated with healthy marsh grasses.

What Does it Take to Fix a Marsh?

Previously, however, Slough's Gut was on the decline, with many of the plants growing in its salty waters either stunted or dying off. The overriding goal, as with many marsh restoration projects, was to reverse this trend and increase the vegetative cover. But does just revegetating a marsh really restore it? On the other hand, some folks, including a few at NOAA, asked whether Slough's Gut should even be considered for "restoration" since it was already functionally a marsh and ... wasn't the ecosystem working OK? The answer on both accounts was: We were about to find out. Although the cause of the marsh plant die-offs was not entirely clear, Hahn and the other trustees suspected it had to do with changes to the natural water drainage systems associated with:

Left to right: Aerial, northeast views of Slough’s Gut Marsh in June 2009 with patches of open water where marsh grass is absent and straight channels, in June 2011 when marsh grass is beginning to fill in, and in June 2013 when healthy marsh grass has returned and some of the reconstructed channels of water follow more natural patterns.

These suspicions were based on monitoring conducted before Slough's Gut was ever slated for restoration. It appeared that water would not drain sufficiently off the marsh during the tidal cycle and this was suppressing the vegetation, in a phenomenon known as "waterlogging." Hahn became involved as they began scoping the restoration project design. At this point, he suggested that although revegetating the marsh was a reasonable goal, the primary emphasis should be on restoring a more natural network of tidal channels, replacing the old mosquito ditches. Around the 1940s, this salt marsh had been dug up and filled in, creating a series of parallel ditches connecting at a straightened main river channel (a now-questionable practice known as "mosquito ditching" because it aimed to reduce mosquito populations). The current configuration of channels that was leading to the loss of vegetation in Slough's Gut was likely also impacting the fish, crabs, and other aquatic life that would normally use the marsh. Looking to a similar project on Washington, DC's Anacostia River, the design team decided on a technique for restoring tidal channels that uses observations from relatively unimpacted marshes. This example helped them answer questions such as:

Next, Delmarva Power and Light hired the contractor Cardno ENTRIX to develop a restoration design that used the existing channels as much as possible but restored the channel network by creating new channels while plugging and filling others. The Delaware Department of Natural Resources and Environmental Control (DNREC), which has extensive experience working in wetlands, executed the design. Then, they watched and waited. 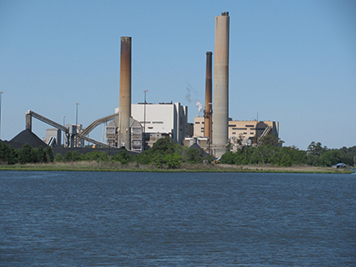 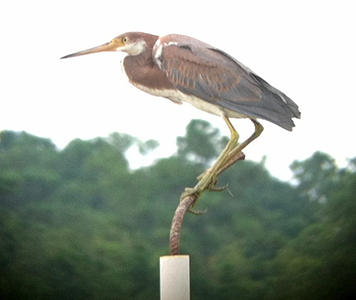 The number of birds observed at Slough's Gut Marsh has doubled since 2008. Here, a heron perches at the site.

Cardno ENTRIX monitored the renovated marsh for five years and collected data on its recovery. In the summer of 2013, the natural resource agencies involved (NOAA, the Delaware DNREC, and the U.S. Fish and Wildlife Service) together with Delmarva Power and Light, Cardno ENTRIX, and the Center for Inland Bays (the project hosts) visited Slough's Gut Marsh to view and discuss its progress. Based on the past five years of data, the marsh is on a path toward successful restoration. There has been a 50 percent increase in the density of fish, shrimp, and crabs living in Slough's Gut, compared with levels before they restored the natural tidal channels. With this extra food, the number of birds observed there has doubled since 2008. Additional environmental sampling showed localized drainage improvements, indicating that the new channel network is stable yet adaptable, as it should be in natural marshes. This feature is particularly beneficial when confronted with issues like sea level rise and hurricanes. Protecting and restoring tidal wetlands is an important effort in adapting to climate change in coastal areas. 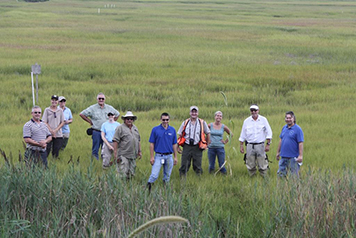 The natural resource trustees celebrate the restoration of Slough’s Gut Marsh in August 2013. Simeon Hahn is at the far right.

This project demonstrates that ecological impacts in tidal marshes from historical ditching and diking can be restored by reconstructing a more natural tidal channel network. Next time you're in the area, go see the success at Slough's Gut yourself and leave time to visit the Center for the Inland Bays to learn more about other great environmental efforts going on in Delaware's inland bays. The center is easily accessible and the view is tremendous.