Diving for Debris: Washington's Success Story in Fishing Nets out of the Ocean

SEPTEMBER 2, 2014 -- The scale of the challenges facing the ocean—such as overfishing, pollution, and acidification—is enormous, and their solutions, achievable but complex. That is why the impressive progress in cleaning up a major problem in one area—Washington's Puget Sound—can be so satisfying. Get a behind-the-scenes look at this inspiring progress in a new video from NOAA-affiliate Oregon SeaGrant on the Northwest Straits Foundation net removal project. For over a decade, the Northwest Straits Foundation, supported by the NOAA Marine Debris Program, the U.S. Environmental Protection Agency, state agencies, and many others, has been removing lost and abandoned fishing nets from the inland ocean waters of Puget Sound.

A problem largely invisible to most of us, these fishing nets are a legacy of extensive salmon fishing in the Puget Sound which is now much diminished. Lost during fishing operations, the nets are now suspended in the water column or settled on the seafloor, where they snare dozens of marine species, including marine birds and mammals, and degrade the ocean habitat where they were lost. Made of plastic, these nets do not degrade significantly and continue to catch and kill animals indiscriminately for many years. However, with the help of highly skilled divers, the foundation has removed over 4,700 of these lost nets from Puget Sound. They estimate there are fewer than 900 left in the area and, working with local commercial fishers, have a good handle on the small number of nets currently lost each year. The NOAA Marine Debris Program has collaborated on or funded over 200 projects to research, prevent, and remove marine debris from waters around the United States. You can learn more about our other projects, such as the Fishing for Energy program, at clearinghouse.marinedebris.noaa.gov. 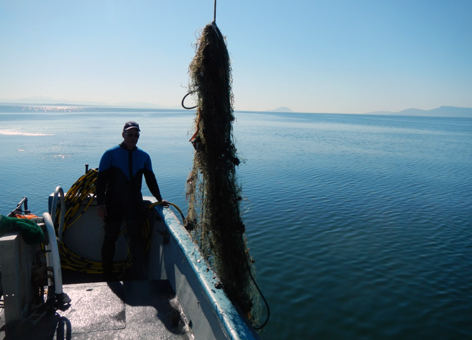