As Dredging Ends on Hudson River, a Push to Continue Removing Contaminated Sediment

Between 2009 and 2015, more than 2.7 million cubic yards of sediment across approximately 500 acres will have been dredged from 40 miles of the Upper Hudson River between Ft. Edward and the Federal Dam in Troy, New York.

Based on analyses conducted and presented by NOAA at various forums over the past several years, several non-governmental organizations (NGOs) have been advocating for additional sediment removal along the Hudson River. Under the umbrella of a Campaign for a Cleaner Hudson, they organized almost 80 communities up and down the river between Washington and Westchester Counties to sign a resolution urging the U.S. Environmental Protection Agency (EPA) and GE to dredge at least an additional 136 acres of the Upper Hudson and conduct navigational dredging.

Meanwhile, in mid-August, a Hudson River Community Advisory Group meeting revealed to the public that several years of improperly processed Hudson River fish resulted in underestimated levels of PCB contamination. That same day, NOAA's Office of Response and Restoration presented findings which revisited projections of the levels of PCBs [PDF] in Lower Hudson River fish while at EPA's Contaminated Sediment Forum. OR&R concluded that additional removal of PCB-contaminated sediments in the Upper Hudson River is necessary to achieve the PCB reductions in Lower Hudson fish anticipated under the current cleanup. 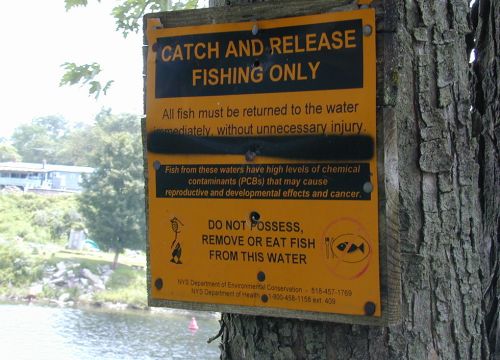 An advisory for catch and release fishing only is in effect along parts of the Hudson River because of high levels of PCBs in fish. (NOAA)
Return to OR&R Weekly
Back to top