From Driving Underwater Scooters to Texting, Hawaii Students Learn Skills for Science Under the Sea 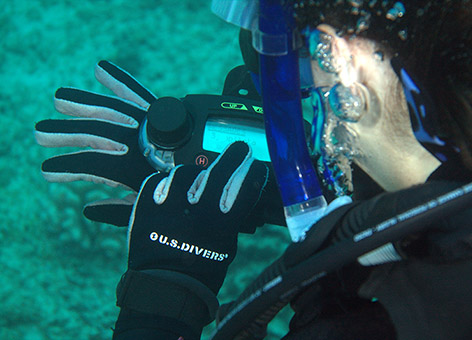 AUGUST 29, 2013 -- The sparkling, turquoise waters off the coast of Hawaii may seem like the perfect place to work, no matter what you're doing. But when you're trying to figure out what happened to that idyllic environment after a ship grounds on a coral reef or spills oil, those attractive waters present a surprising number of challenges. You can't just walk up with a clipboard and start taking samples. You have to haul your team and equipment out by boat, be a qualified SCUBA diver, and be able to get around underwater and communicate with your team. And this is all while (carefully and consistently) documenting the species of coral, fish, and other marine life, as well as their habitats, which might have been affected by a misdirected ship or spilled oil. To help cultivate this unique and valuable skill set in Hawaii's future scientists, NOAA has partnered with the University of Hawaii to offer a hands-on (and flippers-on) course introducing their students to a suite of marine underwater techniques. This multi-week course gives developing young scientists, all enrolled at the University of Hawaii, the critical technical skills required to succeed in the rapidly growing field of marine sciences. The course focuses on advanced underwater navigation, communication, and mapping techniques that NOAA uses in environmental assessment and restoration cases but which can be applied to almost any marine-related career.

For the past month, their classroom was located in the Pacific Ocean off the south shore of the Hawaiian island Oahu. Students learned the proper techniques for using:

Left, class instructors float behind the transmitters for the high precision mapping equipment, which use sonar to determine the location of divers as they take data points using handheld devices. Right, a student uses one of those handheld devices to create maps and input data during the dive. (Jeff Kuwabara/University of Hawaii)

And into Local Jobs

This year's course was taught as a partnership between the NOAA Restoration Center, the NOAA Pacific Islands Regional Office (PIRO), and the University of Hawaii Marine Option Program, with collaboration from staff with the Papahānaumokuākea Marine National Monument. The course was supported by PIRO's Marine Education and Training program.

Left, class instructors bring down PVC pipes from the boat. Right, the pipes are assembled into a square of known size so that the students can practice measuring areas underwater. (Jeff Kuwabara/University of Hawaii)

Efforts such as this one are aimed at keeping young scientists with local ecological skills and experience in Hawaii by allowing them to advance their knowledge of practical underwater techniques. Having this specialization enables them to stay employed in the region and in the field of marine science. Ideally, local students gain the technical skills they need to work in the natural resource management field in Hawaii. After taking the marine underwater techniques course, a number of highly specialized jobs would be open to them, such as conducting: 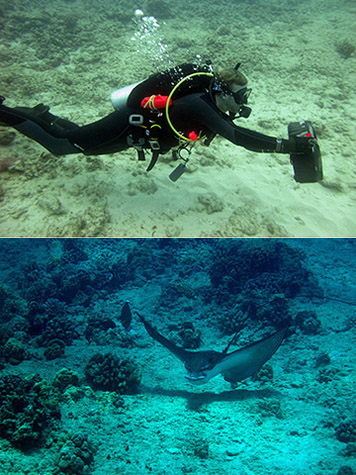 Above, students learned how to extend the range of their surveys by using these underwater scooters. (Matt Parry/NOAA) Below, a spotted eagle ray making an appearance. (Jeff Kuwabara/University of Hawaii)

This kind of underwater expertise was called upon in 2005 when the M/V Casitas ran aground in the Northwestern Hawaiian Islands, in what is now the Papahānaumokuākea Marine National Monument. NOAA divers reported to the scene of the accident to help determine the damage to corals and other parts of the environment caused by the initial ship grounding and subsequent efforts to remove the ship. Using several of the techniques taught in this course, divers were able to accurately determine not only the locations where corals were injured but also how much of the reef was injured (about 18,220 square feet). This information was essential in the process of planning for restoration after the grounding. You can read more about the resulting restoration projects in an earlier update. 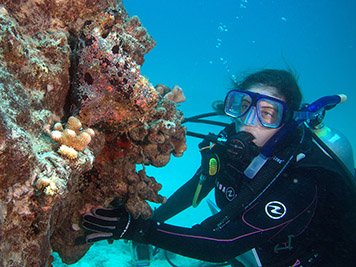 A student takes a break to admire a frogfish. The frogfish can be hard to spot: it is the dark shape with pink dots in the upper left corner. (Jeff Kuwabara/University of Hawaii)
Back to top