During the Chaos of Oil Spills, Seeking a System to Test Potential Solutions 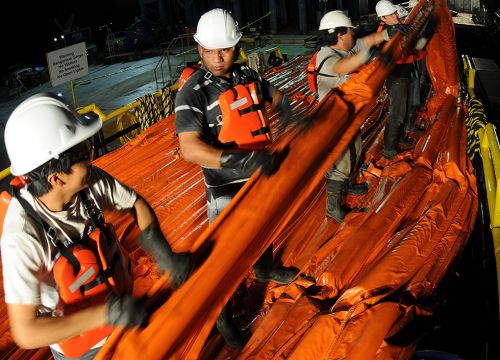 NOAA helped develop a systematic approach to vetting new and non-traditional spill response products and techniques during the fast-paced atmosphere of an oil spill. We helped implement this system during the 2010 Deepwater Horizon oil spill to evaluate the tens of thousands of ideas proposed during the spill. (U.S. Coast Guard)

Strong winds and waves battered the barge as it continued to leak and created dangerous conditions for spill responders.

During the hectic but organized spill response that followed [PDF] the barge's grounding, a number of vendors appeared at the command post with spill cleanup products which they assured responders would fix everything. This scenario had played out at many earlier oil spills, and nearly every time, these peddled products were treated differently, at various times sidelined, ignored, tested, or put to use.

It’s not unexpected for the initial situation at any emergency response—be it medical, natural disaster, fire, or oil spill—to be chaotic. Responders are dealing with limited resources, expertise, and information at the very beginning.

As the situation progresses, additional help, information, and experts typically arrive to make things more manageable. Usually, in the middle of all this, people are trying to be helpful, or make a buck, and sometimes both.

At the spill response in Puerto Rico, the responders formed an official ad hoc group charged with cataloging and evaluating each new suggested cleanup product or technology. The group involved local government agencies, NOAA, and the U.S. Coast Guard. It began to develop a systematic approach to what had typically been a widely varying process at previous oil spills.

The methodology the group developed for this case was rough and quickly implemented for the situation at hand. Over the course of the several months required to deal with the damaged barge and oil spill, the ad hoc group tested several, though not all, of the potential cleanup products.

A few years later, another group took this process a step further through the Regional Response Team III, a state-federal entity for response policy, planning, and coordination for West Virginia, Maryland, Delaware, Pennsylvania, Virginia, and the District of Columbia.

This working group set out to develop a more organized and systematic way to deal with alternative oil spill response techniques and technologies, those which aren't typically used during oil spill responses. After many months of working collaboratively, this multi-agency working group, which included Ed Levine and his colleagues in NOAA's Office of Response and Restoration, produced the approach known as the Alternative Response Tools Evaluation System (ARTES).

This system allows a special response team to rapidly evaluate a proposed response tool and provide feedback in the form of a recommendation to the on-scene coordinator, who directs spill responses for a specified area. This coordinator then can make an informed decision on the use of the proposed tool. 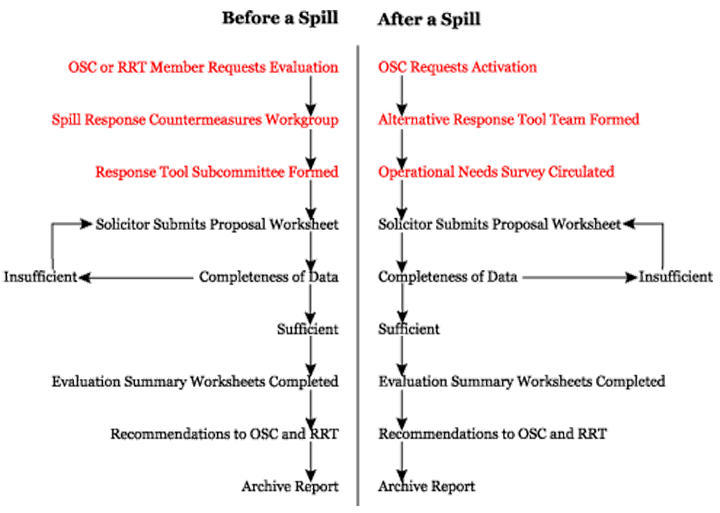 The Alternative Response Tools Evaluation System (ARTES) process is designed for use both before and after a spill. "OSC" stands for on-scene coordinator, the person who directs a spill response, and "RRT" stands for Regional Response Team, the multi-agency group charged with spill response policy, planning, and coordination for different regions of the United States.

The ARTES process is designed for two uses. First, it can be used to assess a product's appropriateness for use during a specific incident, under specific circumstances, such as a diesel spill resulting from a damaged tug boat on the Mississippi River. Second, the process can serve as a pre-evaluation tool during pre-spill planning to identify conditions when a proposed product would be most effective.

One advantage of the ARTES process is that it provides a management system for addressing the numerous proposals submitted by vendors and others during a spill. Subjecting all proposals to the same degree of evaluation also ensures that vendors are considered on a "level playing field."

Although developed for one geographic region, the ARTES process quickly became adopted by others around the country and has been included in numerous local and regional response plans.

Once the ARTES process was codified, several products including an oil solidifier and a bioremediation agent underwent regional pre-spill evaluations. Ed Levine, one of NOAA's Scientific Support Coordinators at the time, was involved in several of those evaluations as well as one during an actual spill. 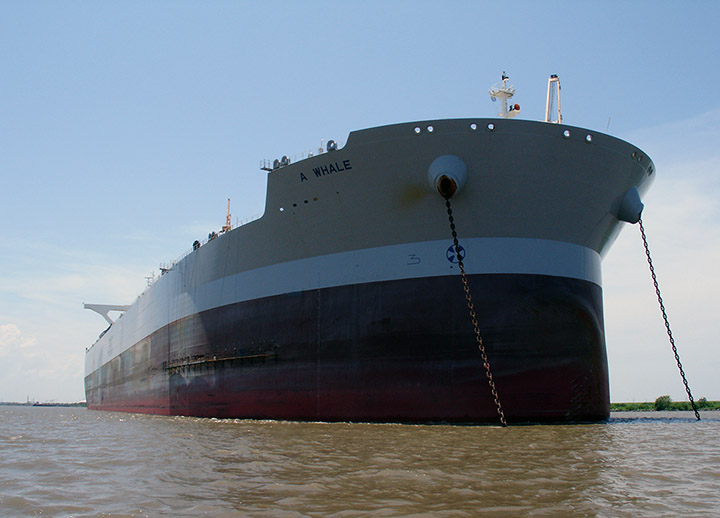 The super tanker "A Whale" after testing during the Deepwater Horizon oil spill. The skimming slits on its bow are being sealed because it was not able to perform as designed. This vessel design was one of more than 80,000 proposals for surface oil spill response submitted during the spill. (NOAA)

Another defining moment for the ARTES process came in 2010 during the Deepwater Horizon oil spill. Within the first week of the spill, the unified command, the multi-agency organization which coordinates the response and includes those responsible for the spill, was inundated with suggestions to cap the leaking well and clean up the oil released into the Gulf of Mexico.

At one of the morning coordination meetings, the BP incident commander shared his frustration in keeping up with the deluge of offers. He asked if anyone had a suggestion for dealing with all of them. Levine's hand shot up immediately.

After the meeting Levine spoke with leaders from both BP and the U.S. Coast Guard and described the ARTES process to them. They gave him the go-ahead to implement it. Boy, did he not know what they were in for!

As the days went by, the number of submissions kept growing, and growing, and growing. What started out as a one-person responsibility—recording submissions by phone and email—was soon taken over by a larger group staffed by the Coast Guard and California Office of Spill Prevention and Response and which eventually grew into a special unit of the response.

A dedicated website was created to receive product proposals and ideas, separate them into either a spill response or well capping method, track their progress through the evaluation system, and report the final decision to archive the idea, test it, or put it to use during the spill.

People who submitted ideas were able to track submissions and remain apprised of each one's progress. Eventually, 123,000 individual ideas were submitted and tracked, 470 made the initial cut, 100 were formally evaluated, and about 30 were implemented during response field operations. Of the original 123,000 submissions, there were 80,000 subsurface and 43,000 surface oil spill response ideas.

One of the many proposals for cleaning up the oil took the form of the ship A Whale. It was a super tanker with a large slit in the bow at the waterline that was meant to serve as a huge skimmer, pulling oil off the ocean surface. Unfortunately, testing revealed that it didn't work.

Some other examples of submissions included sand-cleaning machines and a barge designed to be an oil skimming and storage device (nicknamed the "Bubba Barge") that actually did work. On the other hand, popular proposals such as human hair, feathers, and pool "noodles" didn't perform very well.

Even under the weight of this incredible outpouring of proposals, the ARTES process held up, offering a great example of how far pre-planning can go.