Embarking on the GYRE Expedition: A Scientific and Artistic Study of the Trash on Alaska's Shores 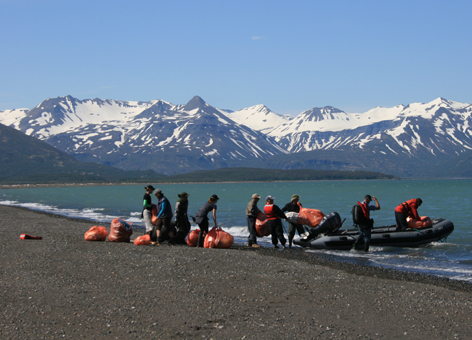 During part of the GYRE Expedition in June of 2013, a group of educators, scientists, and artists removed 4 tons of debris that had been previously collected by the National Park Service from Hallo Bay in Alaska's Katmai National Park. Because there was no place to dispose of it locally, the debris had to be transported to Seward, a common problem for dealing with debris on remote shorelines. (NOAA)

JULY 29, 2013 -- Our oceans—the Atlantic, Pacific, Arctic, Indian, and Antarctic—are actually all part of one, interconnected body of water. This is one reason Alaska's 33,904 miles of shoreline, which are frequently secluded and have very few people nearby, can still turn up surprisingly high levels of trash arriving from faraway places. In order to study and raise awareness about this problem on Alaska's shorelines, an international group of scientists, artists, and educators, including the NOAA Marine Debris Program's Peter Murphy, recently embarked on the GYRE Expedition. Organized by the Anchorage Museum and Alaska SeaLife Center, this scientific and creative collaboration spent a week in June aboard the research ship Norseman. They traveled around 500 miles down the coast bordering the Gulf of Alaska, making several stops to survey and collect marine debris along the way. "As we stop at debris aggregation beaches at Gore Point, Shuyak Island, and Hallo Bay," wrote Peter Murphy of the NOAA Marine Debris Program before embarking, "we in the science team will collect data on debris densities and composition while artists collect debris and capture their impressions for works." According to the Anchorage Museum website, these marine debris works of art, "on view February through September 2014 at the Anchorage Museum, will tell a global ocean debris story through the work of more than 20 artists from around the world. The 7,500-square-foot exhibition will include a section specific to Alaska featuring the 2013 expedition's resulting scientific discoveries, as well as art created from the marine debris gathered on Alaska's beaches during the journey." The project is called the GYRE Expedition in reference to the ocean’s massive, swirling, whirlpool-like phenomena known as "gyres," which tend to gather and move around large amounts of marine debris. These gyres, including the North Pacific Gyre along the Gulf of Alaska, are associated with what are (misleadingly) known as the "garbage patches."

At right, the last stop of the expedition was Hallo Bay, famous for its grizzly bears and heavily impacted by debris that washed in from the 2011 tsunami in Japan. At left, tangled fishing gear washed up next to large pieces of driftwood on Alaskan beaches, evidence of the force of the winter storms that bring debris ashore here. (NOAA)

Here is part of Murphy's first dispatch of the expedition, posted from Gore Point East Beach, Alaska, on June 8, 2013:

Friday we left Seward, Alaska, for our first stop at Gore Point, a "catcher" beach that extends into the Alaska coastal current and sees some of the highest debris densities recorded in Alaska. Gulf of Alaska Keeper (GoAK) cleaned the beach in 2007–2008 and removed over 20 tons of debris from less than a mile of shoreline. On Saturday, Chris Pallister, the head of GoAK, arranged to be at the beach with some of his crew to show us the site and how it's changed over the six years that he's been cleaning it. From his initial survey, he thought that the debris was significantly less than in 2012. What we saw in logs pushed far up the beach and broken tree branches were evidence of just how strong the weather and ocean forces are that bring debris ashore here. As we spent the day on-site, a small team of us set up our monitoring system, while others collected impressions and debris. Over the course of the day, we worked together to conduct a full monitoring survey, following the NOAA shoreline protocol to select transects and catalog debris. This sort of snapshot monitoring data is very helpful in putting numbers to the impressions that people have of a place and the debris they see there—"a lot of foam" can become "___% of debris was foam." When you collect data at the same site over time, it can also answer the important question of change, since differences in the composition (what) and the quantity (how much) of debris at a site can give us valuable clues to regional or local changes in the debris picture. We’re looking forward to doing the analysis, though it’s at least certain to indicate a lot of foam present.

You can also watch a video to learn more about the GYRE Expedition at https://www.anchoragemuseum.org/galleries/gyre/ and view a map of the expedition's path below. 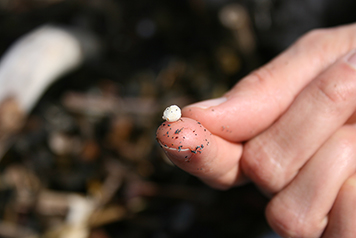 Small foam particles were not in short supply on the beach at Gore Point, Alaska, the first stop on the GYRE Expedition. (NOAA)
Back to top