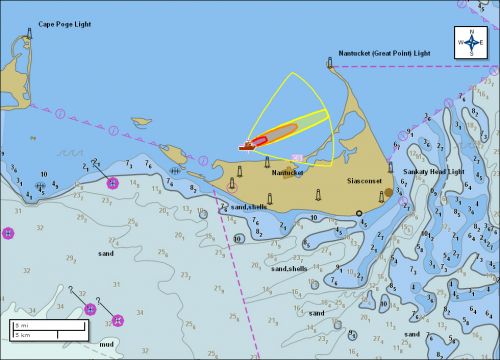 MARPLOT users now are able to bring in map data from a variety of common sources and mapping programs. (NOAA)

OCTOBER 8, 2015 -- A new version of our MARPLOT mapping program is now available. The update includes significant improvements to the import/export feature for this mapping program, in particular, the added support for exchanging data with Google Earth, Google Maps, and Microsoft Excel users.

MARPLOT can now import nine different file types (including the newly added .kml, .kmz, and .xlsx file types), which allows MARPLOT users to bring in map data from a variety of common sources and mapping programs.

As with previous versions in the MARPLOT 5 series, you can use MARPLOT to draw your own objects on the map, import objects on previously created layers from other sources, and edit the data associated with those objects. MARPLOT also lets you customize your map using several global basemap options and allowing you to add Web Mapping Service (WMS) layers and raster images to your map background. If you want to take a screenshot or make a bookmark for later, you can also add annotations and map extras (such as a lat/long grid, scale bar, or compass) to your map display.

MARPLOT is part of the CAMEO software suite of tools for emergency responders and planners, which is developed jointly by NOAA and the U.S. Environmental Protection Agency (EPA). You can use MARPLOT interactively with other desktop programs in the suite to display ALOHA threat zone objects for hazardous chemical releases and link map objects to records in the CAMEOfm database program to store additional information.

You can download MARPLOT from EPA’s CAMEO web page. This desktop program is available for both Windows and Mac computers.