AUGUST 14, 2015 -- From the edge of the Emmons Glacier on Washington's tallest peak, the scenic White River winds down the mountain, through forest, and joins the Puyallup River before finally reaching the sea at an industrial port in the city of Tacoma. Here, in the salty waters of Puget Sound's Commencement Bay, iconic Northwest salmon start their own journey in reverse. These fish head up waterways toward Mt. Rainier, where they were born, where they will spawn, and where they will die. Recently NOAA and our partners announced a restoration project that will improve the floodplain of the White River for migrating fish. One of Mt. Rainier's largest rivers and one of Puget Sound's most important areas for imperiled salmon and steelhead, the White River has been re-routed and re-engineered for longer than a century. This restoration was made possible by the U.S. Department of Justice's August 6, 2015 announcement that more than 56 parties have agreed to restore key salmon habitat on the White River. The settlement will also permanently preserve intertidal habitat in Wheeler Osgood Waterway in Tacoma's Commencement Bay. Fulfilling these restoration projects will resolve their liability for natural resource damages caused by releasing hazardous substances into the bay's Thea Foss and Wheeler-Osgood Waterways. The White River project will not only help protect the region's salmon but also its communities as it sets back levees and widens the floodplain. By restoring fish habitat and providing slower-moving side channels on the river, the proposed project will reopen 121 acres of historic floodplain around the river. Allowing floodwaters more room to flow, this project will also help reduce the risk of flood damage for more than 200 nearby homes and businesses. The latest project will continue a long legacy of ensuring those responsible for releasing hazardous materials—from industrial chemicals such as PCBs to heavy metals including lead and zinc—into Commencement Bay are held accountable for restoring public natural resources. This is the 20th natural resources settlement related to pollution in Commencement Bay, which is the industrial heart of Tacoma. Through these settlements, more than 350 acres of Puget Sound habitat will have been restored, offsetting impacts to salmon, other fish, and wildlife harmed by pollution in the bay. Those responsible for the pollution will monitor and adaptively manage the project under a 10-year plan that ensures at least 32.5 acres of the restoration site are inundated by the river and thus accessible to fish. They also will pay more than $1 million toward the natural resource trustees’—including NOAA's—assessment, oversight and the long-term stewardship costs of maintaining the project over the next 100 years and beyond. Photo of Thea Foss Waterway used via Creative Commons: Kendrick Hang, Attribution 2.0 Generic License 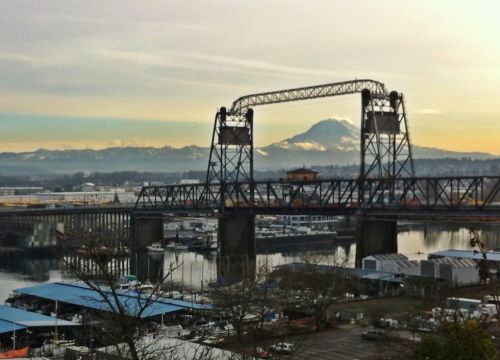 Mt. Rainier looms over the Thea Foss Waterway as it leads out to Commencement Bay, the industrial heart of Tacoma, Washington. Two new restoration projects will make up for the natural resource damages caused by organizations releasing hazardous substances into this and a neighboring waterway. (Photo: Kendrick Hang, Attribution 2.0 Generic License) 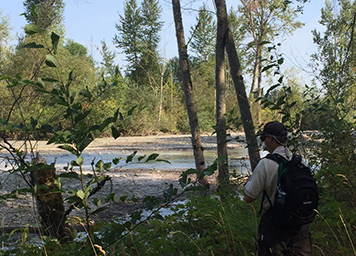 One restoration project will set back levees on the White River and widen its previously re-engineered floodplain. This will create better habitat for migrating fish to feed, rest, and spawn, as well as offer improved flood protection for nearby homes and businesses. (NOAA)
Back to top