For the First Time in Decades, Scientists Examine How Oil Spills Might Affect Baleen Whales 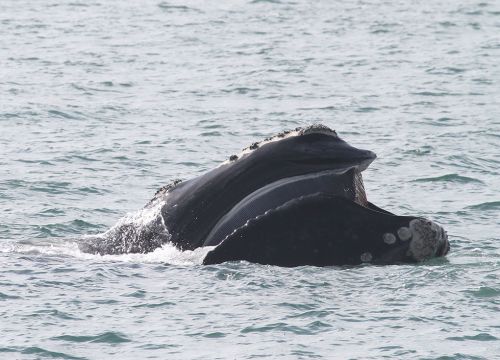 NOAA scientists and partners recently collaborated to examine how oil and dispersants might affect the function of baleen in humpback, bowhead, and right whales (pictured). Hundreds of baleen plates hang from these whales' top jaws and allow them to filter food from the water. (Credit: Georgia Department of Natural Resources, Permit 15488)

MARCH 16, 2016 -- Several days of unseasonably warm weather in late September had Gary Shigenaka starting to wonder how much longer he and his colleagues would be welcome at Ohmsett, a national oil spill research facility in New Jersey.

They were working with whale baleen, and although the gum tissue anchoring their baleen samples had been preserved with formalin, the balmy fall weather was taking a toll.

As a result, things were starting to smell a little rank.

Fortunately, cooler weather rounded out that first week of experiments, and the group, of course, was invited back again. Over the course of three week-long trials in September, December, and January, they were trying to tease out the potential impacts of oil and dispersants on whale baleen.

As a marine biologist with NOAA's Office of Response and Restoration, Shigenaka's job is to consider how oil spills might threaten marine life and advise the U.S. Coast Guard on this issue during a spill response.

But the last time scientists had examined how oil might affect whale baleen was in a handful of studies back in the 1980s. This research took place before the 1989 Exxon Valdez and 2010 Deepwater Horizon oil spills and predated numerous advances in scientific technique, technology, and understanding.

Thanks to a recent opportunity provided by the U.S. Bureau of Safety and Environmental Enforcement, which runs the Ohmsett facility, Shigenaka and a team of scientists, engineers, and oil spill experts have been able to revisit this question in the facility's 2.6 million gallon saltwater tank.

To understand why this group is focused on baleen and how an oil spill might affect this particular part of a whale, you first need to understand what baleen is and how a whale uses it. Similar to fingernails and hooves, baleen is composed of the protein keratin, along with a few calcium salts, giving it a tough but pliable character.

Left: Made of the flexible substance keratin, baleen plates have tangles of "fringe hair" that act as nets to strain marine life from mouthfuls of ocean water. This study examined how oil and dispersants might affect the performance of baleen. Right: Engineers from Woods Hole Oceanographic Institution worked with Ohmsett staff to attach a custom-built clamp to the mechanical bridges that move back and forth over Ohmsett's massive saltwater test tank. The clamp gripped the sections of baleen and allowed them to be held at different angles as they moved through the water. (NOAA)

Twelve species of whales, including humpback and bowhead, have hundreds of long plates of baleen hanging from the top jaw, lined up like the teeth on a comb, which they use to filter feed. A whale's tongue rubs against its baleen plates, fraying their inner edges and creating tangles of "fringe hair" that act like nets to catch tiny sea creatures as the whale strains massive gulps of ocean water back out through the baleen plates.

Baleen does vary somewhat between species of whales. Some might have longer or shorter baleen plates, for example, depending on what the whale eats. Bowhead whales, which are Arctic plankton-eaters, can have plates up to 13 feet long.

This study was, at least in part, inspired by scientists wondering what would happen to a bowhead whale if a mouthful of water brought not just lunch but also crude oil from an ill-fated tanker traversing its Arctic waters.

Would oil pass through a whale's hundreds of baleen plates and coat their mats of fringe hairs? Would that oil make it more difficult for the whale to push huge volumes of water through the oily baleen, causing the whale to use more energy as it tried? Does that result change whether the oil is freshly spilled, or weathered with age, or dispersed with chemicals? Would dispersant make it easier for oil to reach a whale's gut?

Using more energy to get food would mean the whales then would need to eat even more food to make up for the energy difference, creating a tiring cycle that could tax these gargantuan marine mammals.

Testing this hypothesis has been the objective of Shigenaka's team. While it might sound simple, almost nothing about the project has been straightforward.

Challenges as Big as a Whale 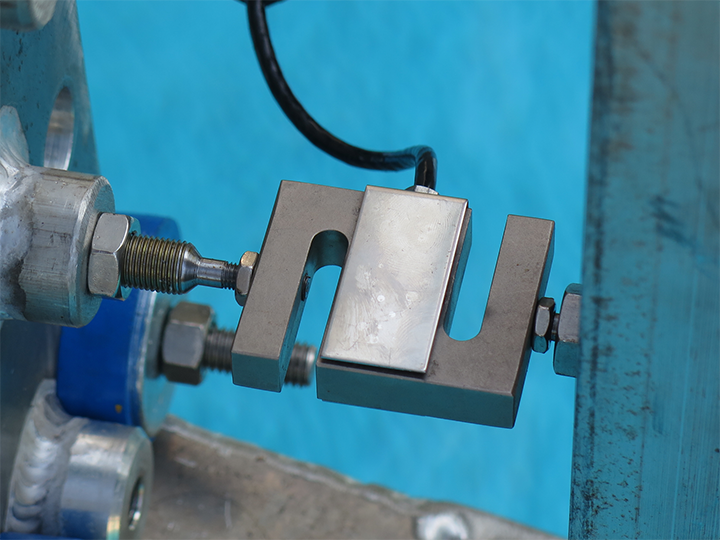 An s-shaped metal load cell attached to the clamp holding baleen measures the change in drag acting on the baleen as it moves through water, oil, or dispersant. (NOAA)

One of the first challenges was tackled by the engineers at Woods Hole Oceanographic Institution. They were tasked with turning the mechanical features of Ohmsett's giant saltwater tank into, essentially, a baleen whale's mouth.

Woods Hole fabricated a special clamp and then worked with the Ohmsett engineering staff to attach it to a corresponding mount on the mechanical bridges that move back and forth over the giant tank. The clamp gripped the sections of baleen and allowed them to be held at different angles as they moved through the water. In addition, this custom clamp had a load cell, which was connected to a computer on the bridge. As the bridge moved the clamp and baleen at different speeds and angles through the water, the team could measure change in drag on the baleen via the load cell.

With the mechanical portion set up, the Ohmsett staff released oil into the test tank on the surface of the water, and the team watched expectantly how the bridges moved the baleen through the thin oil slick. It turned out to be a pretty inefficient way to get oil on baleen.

"How might a whale deal with oil on the surface of the water?" asked Shigenaka. "If it's feeding, it might scoop up a mouthful of water and oil and run it through the baleen." But how could they simulate that experience?

Left: In an effort to replicate how a whale might get oil on its baleen, the research team tried using paintbrushes to apply oil to the baleen. However, this approached matted down the fringe hairs too much. Note the shorter baleen plates compared to samples from other species of whales. Right: The most effective approach to adding oil to the baleen plates came by dipping the baleen into a pool of floating oil contained by a plastic ring. (NOAA)

They tried using paintbrushes to apply crude oil to the baleen, but that seemed to alter the character of the baleen too much, matting down the fringe hairs. After discussions with the Ohmsett engineering staff, the research team finally settled on dipping the baleen into a pool of floating oil that was contained by a floating ring. This set-up allowed a relatively heavy amount of oil to contact baleen in the water and would help the scientists calibrate their expectations about potential impacts. 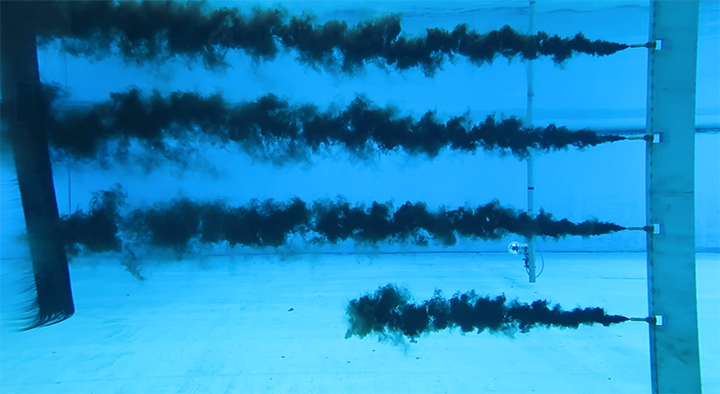 After mixing chemical dispersant with oil, the research team released plumes of it underwater in Ohmsett's test tank as baleen samples moved through the water behind the applicator. Researchers also tested the effects of dispersant alone on baleen function. (NOAA)

In all, Shigenaka and his teammates ran 127 different trials across this experiment. They measured the drag values for baleen in a variety of combinations: through saltwater alone, with fresh oil, with weathered oil, with dispersed oil (pre-mixed and released underwater through a custom array designed and built by Ohmsett staff), and with chemical dispersant alone. They tested during temperate weather as well as lower temperature conditions, which clearly thickened the consistency of the oil. They conducted the tests using baleen from three different species of whales: bowhead, humpback, and right whale.

Following all the required regulations and with the proper permits, the bowhead baleen was donated by subsistence whalers from Barrow, Alaska. The baleen from other species came from whales that had stranded on beaches from locations outside of Alaska.

In addition to testing the potential changes in drag on the baleen, the team of researchers used an electric razor to shave off baleen fringe hairs as samples for chemical analysis to determine whether the oil or dispersant had any effects on baleen at the molecular level. They also determined how much oil, dispersed oil, and dispersant were retained on the baleen fringe hairs after the trials.

At this point, the team is analyzing the data from the experimental trials and plans to submit the results for publication in a scientific journal. NOAA is also beginning to create a guidance document on oil and cetaceans (whales and dolphins), which will incorporate the conclusions of this research.

While the scientific community has learned a lot about the apparent effects of oil on dolphins in the wake of the 2010 Deepwater Horizon oil spill, there is very little information on large whales. The body of research on oil’s effects on baleen from the 1980s concluded that there were few and transient effects, but whether that conclusion holds up today remains to be seen.

"This is another piece of the puzzle," said Shigenaka. "If we can distill response-relevant guidance that helps to mediate spill impacts to whales, then we will have been successful." 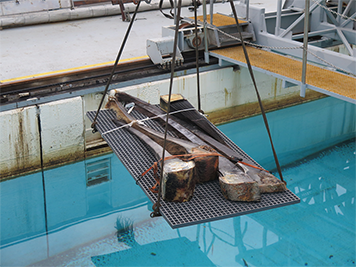 A view of some segments of baleen anchored to gum tissue at Ohmsett's 2.6 million gallon saltwater tank. (NOAA)
Back to top