Fishing for Energy: Where Old Fishing Gear Goes to Retire 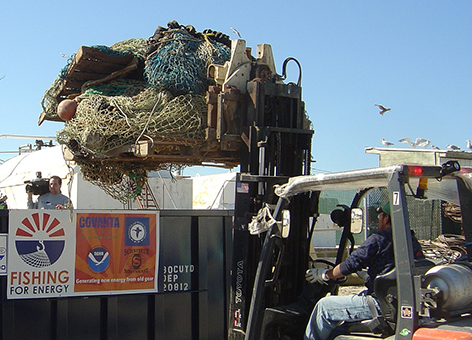 Disposing of derelict fishing gear in a Fishing for Energy bin. Collected gear is burned to create energy at Covanta Energy facilities or recycled through Schnitzer Steel. (National Fish and Wildlife Foundation)

SEPT. 5, 2012 — Although consumer debris is the most commonly collected item during beach cleanups, below the water lies another form of debris that is equally prevalent and harmful: derelict fishing gear. Defined as gear that has been lost or abandoned in the marine environment, derelict fishing gear poses a huge threat to marine organisms and the environment through impacts such as entanglements and ghost fishing. It consists of any items used for recreational or commercial fishing activities, such as nets, pots, ropes, and fishing line.

When the NOAA Marine Debris Program was established through the Marine Debris Research, Prevention, and Reduction Act of 2006, the program was charged with the "development of effective non-regulatory measures and incentives to cooperatively reduce the volume of lost and discarded fishing gear and to aid in its recovery."

In essence, we needed to develop a program to keep fishing gear from becoming marine debris. Enter the Fishing for Energy program. Fishing for Energy is a partnership between Covanta Energy, the National Fish and Wildlife Foundation, the NOAA Marine Debris Program (a part of the Office of Response and Restoration), and Schnitzer Steel, designed to provide a cost free disposal solution for derelict or otherwise unusable fishing gear to commercial fishermen across the nation. The program gives fishermen a place to dispose of derelict gear they come across while on the water and eases the financial burden associated with the disposal of unusable fishing gear in landfills. By placing bins at busy fishing ports, the program significantly increases the likelihood that derelict gear does not become marine debris.

How does Fishing for Energy work? The partnership strategically places dumpsters at busy fishing ports around the country, where commercial fishermen can easily dispose of old, unusable fishing gear. Full dumpsters of collected gear are then transported to local Schnitzer Steel facility, where metal gear is recycled and nets and pots are sheared for easier disposal. From there, the gear is brought to the local Covanta Energy facility where gear, such as ropes and nets, are burned as a source of renewable energy to power local communities.

Today, Fishing for Energy is represented in 9 states and 31 ports across the country. Since its establishment in 2008, about 750 tons of gear (nearly 1.5 million pounds!) have been prevented from becoming marine debris. Learn more about the issue of derelict fishing gear and the process of turning marine debris into energy through the NOAA Marine Debris Program's Fishing for Energy partnership. 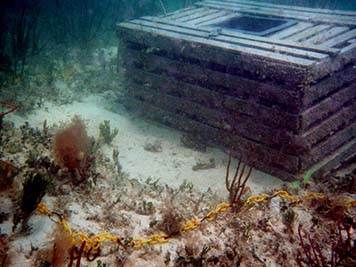 A derelict stone crab pot rests on the bottom of the ocean in waters off the Florida coast. (NOAA)
Back to top