On the Front Lines of an Oil Spill in My Own Backyard: A Report from Santa Barbara, California

JUNE 3, 2015 -- Gabrielle Dorr, NOAA/Montrose Settlements Restoration Program Outreach Coordinator, is based in Long Beach, California. Here she shares her recent experience with the pipeline oil spill at Refugio State Beach, north of her home. When I first heard about the pipeline oil spill at Refugio State Beach near Santa Barbara, California, a couple weeks ago, I felt concerned about the fact that it was only a few hours up the coast from where I currently live and work. I couldn't stop thinking about what the long-term impacts would be to the beautiful beaches we have here in southern California. As a NOAA communications specialist who had cut her teeth in providing communications support for the 2010 Deepwater Horizon oil spill, I thought I knew roughly what to expect when I was called in to help in Santa Barbara. When I was asked to provide support for the Deepwater Horizon oil spill in July 2010, oil had been gushing into the ocean for several months and was washing up on beaches bordering five states far from my home in California. I was able to get out into the field in Louisiana to see firsthand what an oiled marsh looks like, but that was months after the spill began. In addition, the massive scale of the response and damage assessment efforts made it tough to grasp the full picture of the spill. Still, it was important for me to see the impacts for myself, so that I could better tell the story about what happened and what NOAA and our partners were going to do to make it right.

From the Gulf of Mexico to Southern California

This time, at Refugio State Beach, was different. I was stationed at a command center for those working to assess the environmental impacts of the spill only three days after a pipeline released up to 105,000 gallons of oil, with at least 21,000 gallons reaching the Pacific Ocean north of Santa Barbara. From the start of this oil spill, I was able to see the inner workings of the Natural Resource Damage Assessment process and how complex and challenging this process can be for the scientists involved. Biologists, armed with notebooks and cameras, were diligently filling out paperwork and going over every painstaking detail of their data. Collecting good data is extremely important at this early stage because it will be used as evidence showing the oil spill’s potential impacts to wildlife and natural areas. The next day I was asked to follow a team into the field to take photos of them collecting fish samples from one of the oil spill's "hot zones." At the stretch of Refugio State Beach where the majority of the oil cleanup activities were taking place, it was easy to be overwhelmed by the scene. There were a huge number of trucks, cars, buses, people in hard hats, reporters, and even an eating area with eight large tables set up under tents.

A team of scientists from NOAA, the National Park Service, California Department of Fish and Wildlife, and a firm representing Plains All American Pipeline, spent the day sampling fish for oil contamination at Refugio State Beach in Santa Barbara County, California. (NOAA)

That day I was part of a team of nine people who would be sampling fish for oil contamination, with representatives from NOAA, the National Park Service, California Department of Fish and Wildlife, and an environmental consulting firm representing Plains All American Pipeline, the company responsible for the leaking pipeline. When we checked in with the on-site safety officer, he told us that we would need to wear Tyvek suits, booties taped around our calves, gloves, and hard hats.

Out on the beach it was hard not to step in oil since it covered most of the cobble rocks lining the beach in a thick band. I watched as the team baited their hooks and cast their lines in the water. The fishing team spread out along the beach, making the job of running buckets of samples between those catching and processing the fish even more challenging. Once I had finished taking photos, I began shuttling buckets of fish from the edge of the contaminated zone to a picnic table several yards away. There, two women were working hard to process the samples of fish that will later be analyzed for oil contaminants in a lab. The team caught 18 barred surfperch in total, giving us a robust sample of the local population which might have been affected by the oil spill. It was a successful day of sampling, but at the same time, I found it difficult not to think about how all of that oil was going to be cleaned off of those rocks. Working at the front line of the oil spill at Refugio State Beach was a unique experience for me, but it also feels a little too close to home. When I was responding to the Deepwater Horizon oil spill in the Gulf of Mexico, I was stationed two hours away from the nearest coast and lived almost 2,000 miles away in California. I found having an oil spill in your own backyard is much more personal and reminds me of how important it is to plan, train, and prepare for oil spills long before any oil hits the water. For more information on the response to this oil spill, visit the Refugio Response Joint Information Center website. 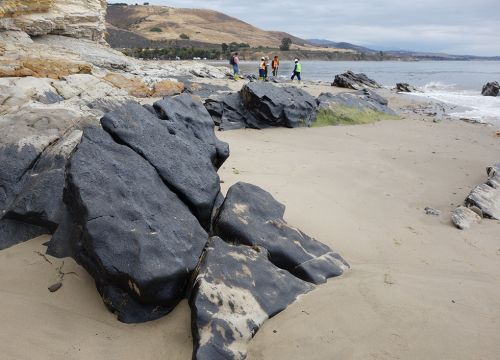 NOAA has been involved with the May 19, 2015 oil spill resulting from a pipeline break at Refugio State Beach, near Santa Barbara, California, which released an estimated 100,000 gallons of crude oil, with a reported 21,000 gallons reaching the ocean. (Bill Stanley/U.S. Fish and Wildlife Service) 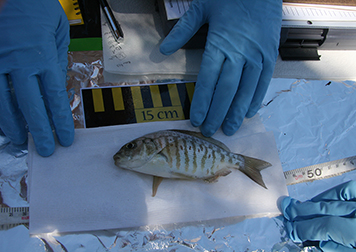 After an oil spill, scientists collect lots of data on the potential impacts of the oil and response efforts to fish, birds, and wildlife. (NOAA)
Back to top