Get Answers to All Your Questions about Japan Tsunami Marine Debris 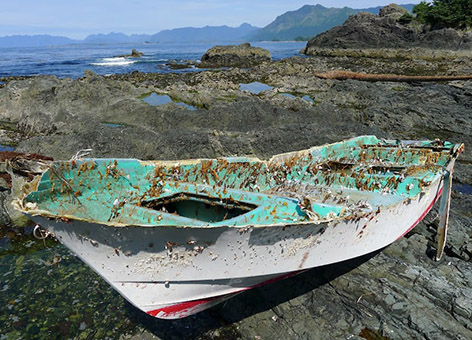 The small boat which washed up on remote Spring Island, British Columbia, Canada, was positively identified as a vessel lost during the 2011 Japan tsunami. Credit: Kevin Head.

MARCH 5, 2013 — What happened to the massive amounts of debris swept into the ocean by the tsunami that inundated Japan's coast in March 2011? How much is out there? How has the NOAA Marine Debris Program, a division of the Office of Response and Restoration, been involved? Learn the answers to these questions and more in the following NOAA infographic, documents, and video about Japan tsunami marine debris.

Get a visual snapshot of the issue of in our Japan tsunami marine debris infographic [PDF]. Find out at a glance about subjects including what tsunami debris has been found, NOAA efforts to model its path, and the likelihood of debris carrying invasive marine species.

Learn more about the issue of Japan tsunami marine debris with this NOAA infographic. Click to enlarge and download.

Share information about tsunami debris, get tips for cleaning up beaches, and more in our handy brochure [PDF].


Download the video file, shown above, on Japan tsunami marine debris [MP4, 31 MB]. If you think you have found tsunami debris from Japan, read our debris handling guidelines. UPDATED MARCH 7, 2013: Thanks to everyone who joined us during our TweetChat about tsunami debris with the Office of Response and Restoration's Marine Debris Program Director, Nancy Wallace. She was available on Twitter to answer questions about radioactivity, floating docks, and anything else you can think of related to Japan tsunami marine debris.