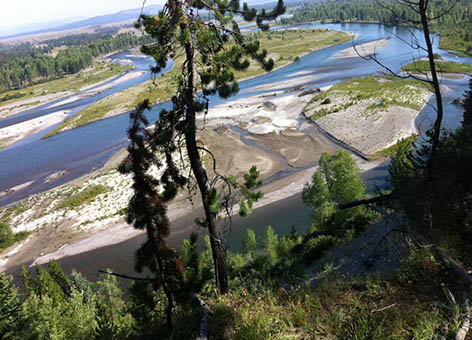 AUG. 8, 2012 — Picture for a moment two streams. In one, a narrow culvert protrudes from under a road, the lower edge a foot or so above the stream that it feeds. The other is a wide, shady creek strewn with logs and running through several smaller channels. If you were a salmon, which of these streams would you rather swim up? Most votes likely would go to the second stream.

NOAA's Restoration Center, partnering with the American Sportfishing Association's Fish America Foundation, awards grants to projects that will restore habitat for sport fish species such as salmon and trout. These projects can include removing barriers that prevent fish from migrating upstream to spawn, such as dams and culverts; placing large woody debris in streams to provide fish with places to rest and hide; or planting native vegetation near streams to provide shade. For example, the Mattole Restoration Council, a community organization in Petrolia, Calif., was awarded a $57,800 Fish America Foundation grant a few years ago to remove a culvert along a tributary of the Mattole River and replace it with a bridge. This project restored one mile of prime steelhead and salmon habitat. Since the partnership began 14 years ago, the Fish America Foundation and NOAA have awarded $6.9 million in grants, resulting in an estimated $23 million worth of restored fish habitat along U.S. coasts, including the Great Lakes. Volunteers play an integral role in these projects, contributing 11,000 hours of labor to the projects funded in 2010 alone. 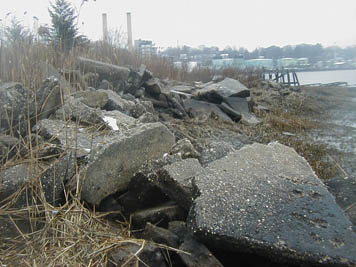 The Applied Environmental Sciences Site prior to restoration. Fill material and common reed (Phragmites australis) were removed in 2003 during the shoreline and saltmarsh restoration of Bar Beach Lagoon in New York. (EEA/Laura Schwanof) 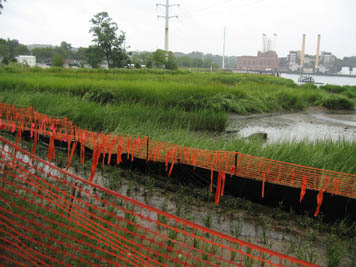 The background shows 2003 saltmarsh restoration at the Applied Environmental Sciences site in New York. In the foreground you can see further restoration which North Hempstead, N.Y., continued in 2007. (NOAA/Lisa Rosman)

These funding opportunities are part of the Restoration Center's Community-Based Restoration Program, which focuses on facilitating and funding hands-on community involvement in habitat restoration. This project is also part of a broader effort throughout many of NOAA's offices to involve the public in restoring and protecting the natural resources in their communities. NOAA's Office of Response and Restoration, which works closely with the Restoration Center to evaluate and restore environmental damages after oil and chemical releases, also reaches out to conservation groups and community members to help rehabilitate degraded habitat. In these cases, the people responsible for the spill are required to fund the restoration projects. A legal settlement over the Applied Environmental Sciences Superfund site on Long Island, N.Y., for instance, included funding for a community restoration project that restored an acre of saltmarsh and shoreline near the site. A more recent project reclaimed a stretch of Philadelphia's waterfront after the 2004 Athos I oil spill on the Delaware River.