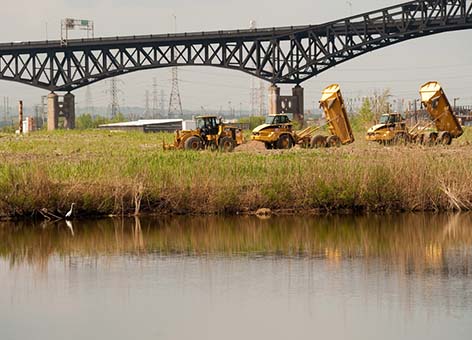 Heavy equipment removes dredge and landfill material from this site of marsh restoration in Lincoln Park, N.J. According to a recent study, NOAA has created 33 jobs for every $1 million spent to restore habitat through "labor intensive" projects.

SEPT. 10, 2012 — For many former industrial sites around the country, the same heavy machines that injured habitat could also be used to reverse environmental damage, thus creating jobs both now and in the future. A recent study by the nonprofit Ecotrust [PDF, 1.6 MB] found that $411 million invested in restoration work in Oregon from 2001-2010 generated as much as $977 million in economic output. And labor-intensive restoration—like building oyster reefs in coastal Alabama—creates more than 30 jobs per million dollars invested. (That's more than twice as many jobs as the oil and gas and road construction industries combined.) NOAA's Restoration Center has even more studies like this from around the nation documenting the benefits of the "restoration economy."

Re-creating coastal habitats that were lost due to human impact doesn't just benefit wildlife. It also supports fisheries, tourism, and coastal resiliency for years down the road. Restoration projects create jobs for construction workers, landscapers, heavy equipment operators, and technical experts such as engineers and wildlife biologists. These same restoration projects also create demand for local businesses, such as plant nurseries and rock quarries. The Office of Response and Restoration is just one piston of the NOAA engine for coastal restoration. Restoration projects being led by NOAA are occurring all across this county. Visit NOAA's Restoration Atlas to locate one near you. Watch this video to learn even more about how the restoration economy is helping to keep people in jobs: