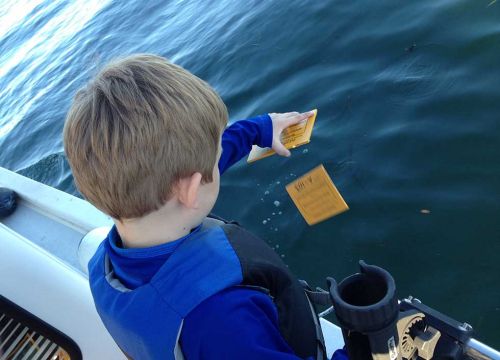 Dropping the first round of drift cards off a boat in Washington's San Juan Islands, a kindergartner kicked off his experiment to study oil spills. (Used with permission of Alek)

JANUARY 11, 2016 -- One spring day in 2014, a shy young boy sidled up to the booth Ashley Braun, a writer with NOAA, was standing at during an open house hosted at NOAA's Seattle campus.

His blond head just peaking over the table, this then-six-year-old, Alek, accompanied by his mom and younger sister, proceeded to ask how NOAA's oil spill trajectory model, GNOME, works.

This was definitely not the question Braun was expecting from a child his age.

After he set an overflowing binder onto the table, Alek showed her the printed-out web pages describing our oil spill model and said he wanted to learn how to run the model himself.

He was apparently planning a science project that would involve releasing "drift cards," small biodegradable pieces of wood marked with identifying information, into Washington's Salish Sea to simulate where spilled oil might travel along this heavily trafficked route for oil tankers.

Luckily, Chris Barker, one of our oceanographers who run this scientific model, was nearby and Braun introduced them.

But that wasn't her last interaction with this precocious, young oceanographer-in-training. Alek later asked Braun to serve on his science advisory committee (something she wished her middle school science fair projects had the benefit of having). She was in the company of representatives from the University of Washington, Washington State Department of Ecology, and local environmental and marine organizations.

Over the next year or so, Braun would direct his occasional questions about oil spills, oceanography, and modeling to the scientists in NOAA's Office of Response and Restoration. 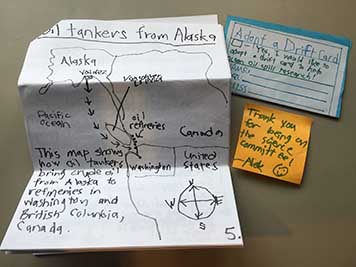 Alek did a lot of work learning about how oil tankers travel from Alaska to Washington waters and about the threat of oil spills. He even fund-raised to cover the cost of materials for his drift cards. (NOAA)

Demystifying the Science of Oil Spills

According to the Washington Department of Ecology, the waters of the Salish Sea saw more than 7,000 journeys by oil tankers traveling to and from six oil refineries along its coast in 2013. Alek's project was focused on Rosario Strait, a narrow eastern route around Washington's San Juan Islands in the Salish Sea. There, he would release 400 biodegradable drift cards into the marine waters, at both incoming and outgoing tides, and then track their movements over the next four months.

The scientific questions he was asking in the course of his project—such as where spilled oil would travel and how it might affect the environment—mirror the types of questions our scientists and oil spill experts ask and try to answer when we advise the U.S. Coast Guard during oil spills along the coast.

As Alek learned, multiple factors influence the path spilled oil might take on the ocean, such as the oil type, weather (especially winds), tides, currents, and the temperature and salinity of the water. He attempted to take some of these factors into account as he made his predictions about where his drift cards would end up after he released them and how they would get there. 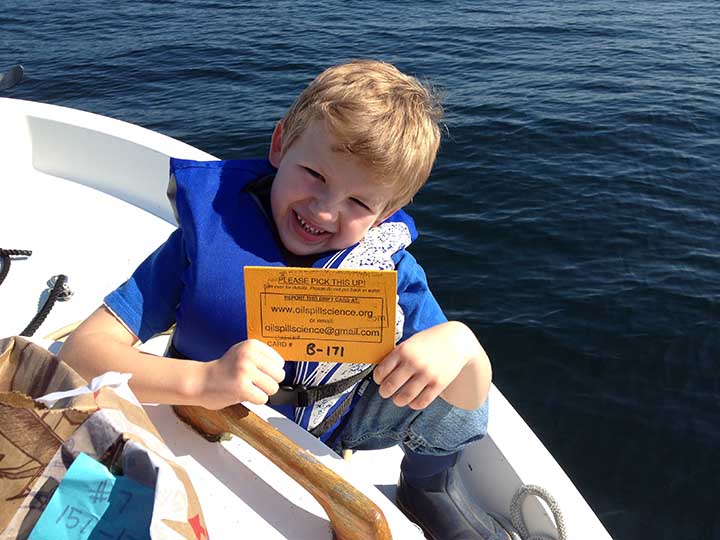 Alek released 400 biodegradable drift cards near Washington’s San Juan Islands in the Salish Sea, at both incoming and outgoing tides, and tracked their movements to simulate an oil spill. (Used with permission of Alek)

NOAA has performed several drift card studies in areas such as Hawaii, California, and Florida. One such study took place after the December 1976 grounding of the M/V Argo Merchant near Nantucket Island, Massachusetts, and we later had some of those drift cards found as far away as Ireland and France.

Of course, any scientist, young or old, comes across a number of challenges and questions in the pursuit of knowledge. For Alek, that ranged from fundraising for supplies and partnering with an organization with a boat to examining tide tables to decide when and where to release the drift cards and learning how to use Google Earth to map and measure the drift cards' paths.

Only a couple weeks after releasing them, Alek began to see reports of his drift cards turning up in the San Juan Islands and even Vancouver Island, Canada, with kayakers finding quite a few of them. 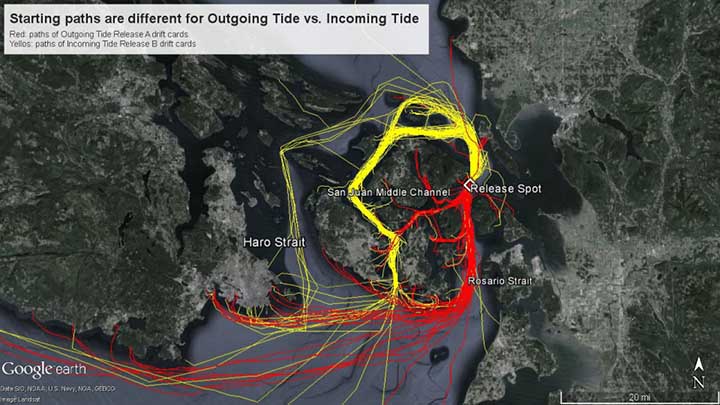 As Alek started to analyze his data, we tried to help him avoid overestimating the area of water and length of coastline potentially affected by the simulated oil spill. Once released, oil tends to spread out on the water surface and would end up in patches on the shoreline as well.

Another issue our oceanographer Amy MacFadyen pointed out to Alek was that "over time the oil is removed from the surface of the ocean (some evaporates, some is mixed into the water column, etc.). So, the sites that it took a long time for the drift cards to reach would likely see less impacts as the oil would be much more spread out and there would be less of it."

During his project, Alek was particularly interested in examining the potential impacts of an oil spill on his favorite marine organism, the Southern Resident killer whales (orcas) that live year-round in the Salish Sea but which are endangered. He used publicly available information about their movements to estimate where the killer whales might have intersected the simulated oil (the drift cards) across the Salish Sea.

Originally, Alek had hoped to estimate how many killer whales might have died as a result of a hypothetical oil spill in this area, but determining the impacts—both deadly and otherwise—of oil on marine mammals is a complicated matter. As a result, we advised him that there is too much uncertainty and not enough data for him to venture a guess. Instead, he settled on showing the number of killer whales that might be at risk of swimming through areas of simulated oil—and hence the killer whales that could be at risk of being affected by oil.

"I'd like to congratulate him on a successful drift card experiment," said MacFadyen. "His results clearly show some of the features of the ocean circulation in this region."

In a touching note in his final report, Alek dedicated his study to several great ocean scientists and explorers who came before him, namely, Sylvia Earle, Jacques Cousteau, William Beebe, and Rachel Carson. He was also enthusiastic in his appreciation of our help: "Thank you very very much for all of your help! I love what you do at NOAA. Maybe someday I will be a NOAA scientist!"

If you're interested in learning more about Alek's study and his results, you can visit his website www.oilspillscience.org, where you also can view a video summary of his project.