JUNE 12, 2013 -- For much of the 20th century, the Atlas Tack Corporation was the main employer in the historic coastal town of Fairhaven, Mass., a place settled in the 1650s by Plymouth colonists. But the presence of this tack factory, shuttered in 1985, left more than a history of paychecks for the area's residents. It also left saltwater marshes so stocked with cyanide and heavy metals that the U.S. Environmental Protection Agency (EPA) listed the location of the factory as a Superfund site in 1990 and slated it for three intensive rounds of cleanup. 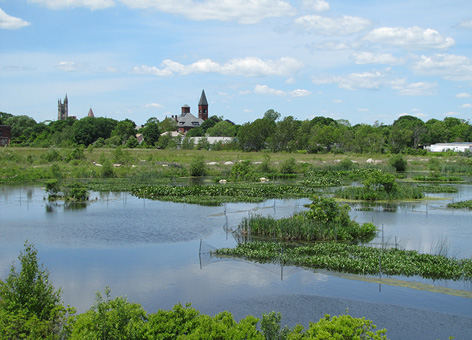 In spring of 2013, the transformation of the polluted Atlas Tack Superfund site into vibrant coastal habitat is hard to miss. Here, you can see the new freshwater marsh with the town of Fairhaven, Mass., in the background. (NOAA)

A Brief History of Atlas Tack

Henry H. Rogers, Standard Oil multimillionaire and friend of famed American author Mark Twain, formed the Atlas Tack Corporation after consolidating several tack manufacturing companies in 1895. The Fairhaven company became one of the nation's largest manufacturers of wire tacks, bolts, shoe eyelets, bottle caps, and other small hardware. However, decades of acids, metals, and other chemical wastes oozing through the factory floor boards and being dumped in building drains, the nearby Boys Creek marsh, and an unlined lagoon left the property contaminated with hazardous substances. Found in the soils, waters, and surrounding marsh were volatile organic compounds, cyanide, heavy metals such as arsenic, pesticides, polychlorinated biphenyls (PCBs), and polycyclic aromatic hydrocarbons (a toxic oil compound). EPA led the Superfund cleanup (referred to as a "remedy") of this hazardous waste site, and the Office of Response and Restoration, through NOAA's Damage Assessment, Remediation, and Restoration Program, contributed scientific and technical guidance to the EPA during the cleanup and restoration of the site’s coastal marshes. 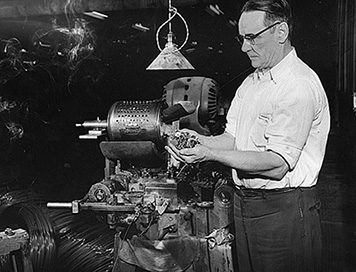 Determining the Remedy: Scalpel vs. Cleaver 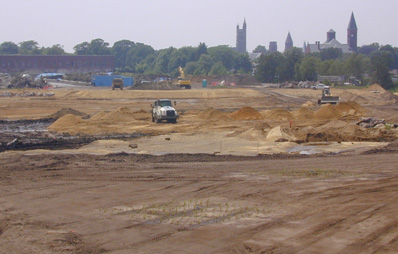 Before restoration: A June 2007 view of the area north of the hurricane dike, following the removal of contaminated sediments. (NOAA)

The original cleanup goals would have required excavating the entire marsh—ripping out the whole thing, despite some areas still functioning as habitat for the area's plants and animals. As a result, NOAA, EPA, and U.S. Army Corps of Engineers were reluctant to excavate the entire wetland. Instead, the agencies took a more targeted approach, beginning in 2001 and 2002. First, they completed a bioavailability study to determine where natural resources were adversely exposed to contaminants from the old tack factory. This study determined which areas of the existing marsh could be preserved while removing the toxic sediment that posed a risk to human health and the environment. The next part of the remedy was undertaken in three phases from 2006 to 2008. Phase one included demolishing several buildings, sheds, and the power plant and excavating 775 cubic yards of contaminated soil and sludge from 10 acres of the designated commercial area of the manufacturing site. Phase two excavated and disposed off-site 38,000 cubic yards of contaminated soil and debris. With NOAA's scientific and technical assistance—and later with help from the Army Corps—EPA, as part of phase three, excavated and later restored 5.4 acres of saltwater and freshwater marsh.

More Than a Remedy: Working Toward Revitalization 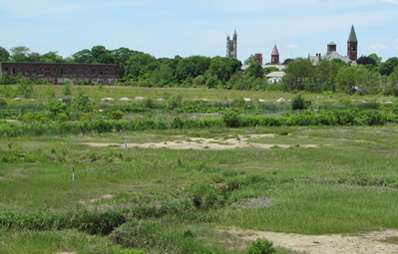 After restoration: A newly created northern salt marsh, shown in June 2013, at the site of the former Atlas Tack factory. Bare spots are filling in but a fully covered wetland landscape is likely still a few years away. (NOAA)

While planning to remove the contaminated wetland sediments, we recognized that the culvert running under the hurricane dike prevented the nearby Atlantic Ocean's tide from replenishing the upstream native saltwater marsh. As a result, invasive reeds were taking over the marsh above the dike. Reconstructing the culvert would have cost millions of dollars, so the agencies got creative. They designed a new strip of land that would divide the existing, poorly functioning saltwater marsh into a smaller, productive saltwater marsh that could be supported with the existing saltwater supply and a new freshwater wetland supported by rainfall and groundwater. The agencies also removed contaminated sediment from and then replanted a salt marsh south of the dike. Across all three marshes, more than 14,000 native marsh plants were planted, providing valuable habitat for birds and other animals. By working together, NOAA, EPA, and Army Corps created an effective cleanup solution for the polluted factory site while enhancing the environment by returning this contaminated marsh to a functioning and sustainable habitat, a process known as ecological revitalization. Today, NOAA, along with the EPA, Army Corps, and Massachusetts Department of Environmental Protection, is helping observe and monitor the success of the restoration projects. A recent visit revealed that two of the marshes already are brimming with healthy plants and wildlife, while the salt marsh which had contaminants removed is showing considerable improvement.