How a Disaster Changed the Face of Ocean Conservation 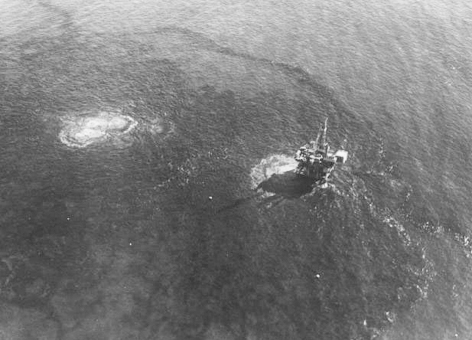 Aerial view of oil rising to the ocean surface (upper left) near the drilling rig, during the Santa Barbara oil spill off the California coast in 1969. (U.S. Geological Survey)

OCT. 26, 2012 — The black ooze crept ashore on the waves, coating beaches and sea life with a sinister sheen. Residents watched, horrified, as relief workers labored to clean scores of oil-covered seabirds. Dead seals and dolphins washed up, poisoned by the toxic sludge.

This was the scene in Santa Barbara following the blowout of Union Oil's Platform A on Jan. 28, 1969, just six miles from the California coastline. Over a period of 10 days, the damaged well leaked more than 3.2 million gallons of crude oil into the Santa Barbara Channel in one of the worst environmental disasters in U.S. history.

The spill was a catastrophe, but it would also become a catalyst for a new era of conservation. Galvanized by the widespread public outcry against offshore drilling and environmental pollution, Congress passed a flurry of environmental legislation in the years following the spill, including the National Environmental Policy Act, the Clean Water Act, and the Coastal Zone Management Act.

One of those bills, the Marine Protection, Research and Sanctuaries Act, was signed into law 40 years ago on October 23, 1972. It granted the Department of Commerce the authority to create a groundbreaking kind of protected area called a "national marine sanctuary" for the preservation or restoration of American waters with special "conservation, recreational, ecological, or esthetic values."

Fittingly, one of the first marine sanctuaries would later be designated off Southern California, in waters once threatened by the oil spill that inspired the creation of the Sanctuaries Act. The Channel Islands, clearly visible from seaside towns like Santa Barbara and Ventura that had been tarnished by oil, are sometimes called the "Galapagos of North America" for their unique and fantastically diverse marine life.

In the late 1970s, a coalition of local governments and citizens still outraged over the spill banded together to safeguard these jewels of the California coast from further harm. Viewing sanctuary designation as their best shot at permanently protecting the waters around the islands from offshore drilling, the group approached NOAA’s Office of Coastal Zone Management—then in charge of the sanctuary program—to nominate the Channel Islands for sanctuary designation in 1978. 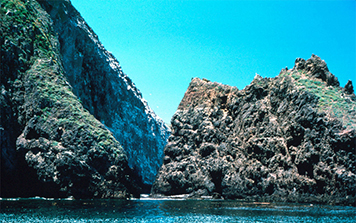 Over the last 40 years, the sanctuary system has grown from one sanctuary to 14 sites of all shapes and sizes, including the nearly 140,000-square-mile Papahānaumokuākea Marine National Monument in the remote Northwestern Hawaiian Islands. Today, the sanctuaries protect a wide range of diverse resources, from fantastic gardens of coral in the Gulf of Mexico to humpback whale breeding grounds in Hawaii. The sanctuary system even extends to the Great Lakes, where it protects immaculately preserved shipwrecks in Lake Huron.

Throughout their history, national marine sanctuaries have time and again proven to be the best option for preserving special places in our ocean and Great Lakes that are desperately in need of responsible stewardship. With four decades of experience to draw from, NOAA’s Office of National Marine Sanctuaries will continue to provide lasting protection for our irreplaceable underwater treasures over the next 40 years and beyond.