How Do You Begin to Clean up a Century of Pollution on New Jersey's Passaic River?

MAY 31, 2016 -- Dozens of companies share responsibility for the industrial pollution on New Jersey's Passaic River, and several Superfund sites dot the lower portion of the river. But one of the perhaps best-known of these companies (and Superfund sites) is Diamond Alkali. In the mid-20th century, Diamond Alkali (later Diamond Shamrock Chemicals Company) and others manufactured pesticides and herbicides, including those constituting "Agent Orange," along the Passaic. The toxic waste from these activities left an undeniable mark on the river, which winds about 80 miles through northern New Jersey until it meets the Hackensack River and forms Newark Bay. Fortunately, the U.S. Environmental Protection Agency (EPA), with support from the natural resource trustees, including NOAA, U.S. Department of Interior, New Jersey Department of Environmental Protection, and the New York State Department of Environmental Protection, has released a plan to clean up the lower eight miles of the Passaic River, which passes through Newark. Those lower eight miles are where 90 percent of the river's contaminated sediments are located [PDF] and addressing contamination in this section of the river is an important first step.

A History of War

A major contributor to that contamination came from what is known as Agent Orange, a mix of "tactical herbicides," which the U.S. military sprayed from 1962 to 1971 during the Vietnam War. These herbicides removed tropical foliage hiding enemy soldiers. However, an unwanted byproduct of manufacturing Agent Orange was the extremely toxic dioxin known as TCDD. Dioxins are commonly released into the environment from burning waste, diesel exhaust, chemical manufacturing, and other processes. The EPA classifies TCDD as a human carcinogen (cause of cancer). Pollution on the Passaic River stretches back more than two centuries, but its 20th century industrial history has left traces of dioxins, pesticides, polychlorinated biphenyls (PCBs), heavy metals, and volatile organic compounds in sediments of the Passaic River and surrounding the Diamond Alkali site. Testing in the early 1980s confirmed this contamination, and the area was added to the National Priorities List, becoming a Superfund site in 1984. Many of these contaminants persist for a long time in the environment, meaning concentrations of them have declined very little in the last 20 years. As a result of this pollution, no one should eat fish or crab caught from the Lower Passaic River, a 17 mile stretch of river leading to Newark Bay.

But how do you clean up such a complex and toxic history? The federal and state trustees for the Lower Passaic River provided technical support as EPA grappled with this question, debating two possible cleanup options, or "remedies," for the river. The cleanup option EPA ultimately settled on involves dredging 3.5 million cubic yards of contaminated sediments from the river bottom and removing those sediments from the site. Then, a two-foot-deep "cap" made of sand and stone will be placed over contaminated sediments remaining at the bottom of the river. This will be an enormous effort—one cubic yard is roughly the size of a standard dishwasher. According to NOAA Regional Resource Coordinator Reyhan Mehran, it will be one of the largest dredging projects in Superfund history. While the entire project could take more than ten years, Judith Enck, EPA Regional Administrator for New York, has pointed out that the process involves "cleaning up over a century of toxic pollution."

A Tale of Two Remedies 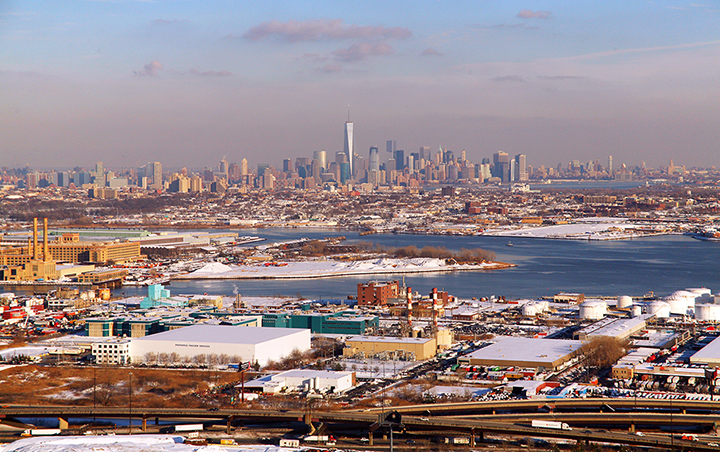 Manhattan skyline from over Newark, New Jersey. The view is across the confluence of the Passaic and Hackensack Rivers and shows the industrial buildup in the area. (Credit: Doc Searls, Creative Commons Attribution 2.0 Generic license)

Mehran describes the alternatives analysis as a complicated one—choosing between two cleanup remedies, the one described above and an "in-water" disposal solution. This second approach called for removing the contaminated sediments from the riverbed and burying them in Newark Bay, in what is known as a "confined aquatic disposal cell." That essentially involves digging a big hole in the bottom of the bay, removing the clean sediments for use elsewhere, filling it with the contaminated sediments, and capping it to keep everything in place. While the less expensive of the two options, serious concerns were raised about the potential effect this in-water solution would have on the long-term ecosystem health of Newark Bay. The chosen remedy, which calls for removing the contaminated sediment from the riverbed and transporting it away by rail to a remote site on land, was selected as the better solution for the long-term health of the ecosystem. Finding the best option incorporated the scientific support and analysis of NOAA and the trustees. As NOAA's Mehran explains, "The site, with some of the highest concentrations of dioxins in sediment, is in the middle of one of the most densely populated parts of our nation, which makes the threat to public resources tremendous." While the upper and middle segments of the Passaic River flow through forests and natural marshes, areas bordering the lower river are densely populated and industrial. Because of industrialization, habitat for wildlife within Newark Bay has already been severely altered, yet the bay's shallow waters continue to provide critically needed habitat for fish such as winter flounder, migratory birds including herons and egrets, and numerous other species. "The watershed of the Lower Passaic River and Newark Bay is highly developed," emphasizes Mehran, "and the resulting scarcity of ecological habitat makes it all the more valuable and important to protect and restore." Learn more about the cleanup plan for the Lower Passaic River [PDF]. Photo of Jersey Central Ruins used courtesy of Joseph, Creative Commons Attribution-NonCommercial-ShareAlike 2.0 Generic license. 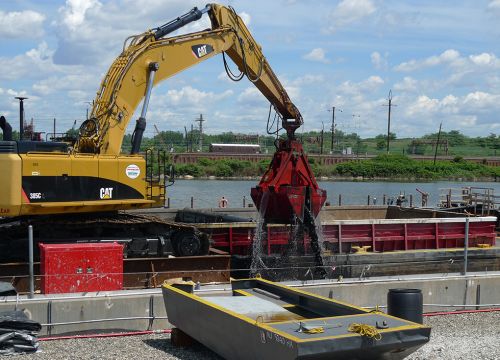 A mechanical dredge removes sediment from an area with high dioxin concentrations on the Passaic River, adjacent to the former Diamond Alkali facility in Newark, New Jersey. (NOAA) 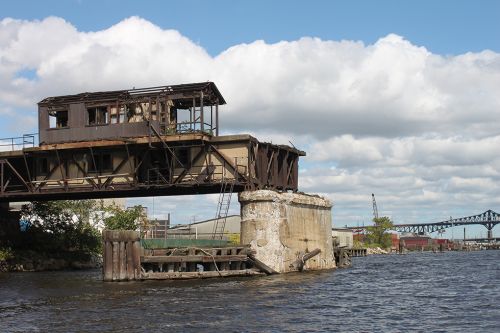 Ruins of an old Central Railroad of New Jersey bridge along the Passaic River hint at a bustling era of industrialization gone by. (Credit: Joseph, Creative Commons)
Back to top