How Does Oil Get into the Ocean? 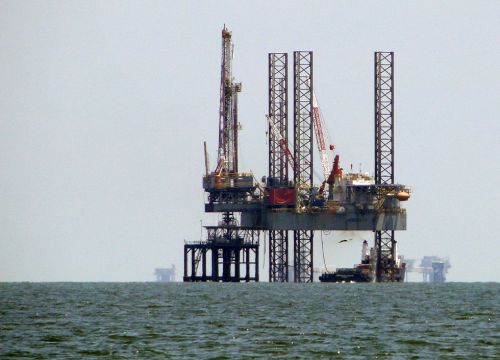 Oil rig in the Gulf of Mexico, off the coast of Port Fourchon, Louisiana. A 2003 report from the National Academy of Sciences estimates 3% of the oil entering the ocean each year comes from oil and gas exploration and extraction activities. (NOAA)

NOVEMBER 2, 2015 -- When many of us think of oil spills, we might think of an oil tanker running aground and spilling its contents into the ocean, as in the case of the oil tanker Exxon Valdez when the ship ran aground near the coast of Alaska in 1989.

In fact, there are actually several ways crude or refined oil may reach the marine environment. All of those spills add up too.

In a 2003 publication, the National Research Council of the National Academy of Sciences reported that roughly 343,200,000 gallons of oil were released into the sea annually, worldwide. 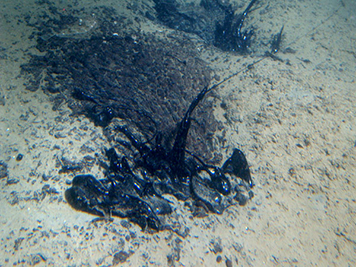 A natural tar seep releases oil offshore from Gaviota, California. When an oil spill occurs in an area with many naturally occurring seeps, responders may have a difficult time telling spilled oil apart from seep oil. (Donna Schroeder/U.S. Geological Survey)

Of this amount, the report estimates the origin of that oil as follows:

Wherever oil is consumed, such as in manufacturing or when loading a ship with fuel, there are opportunities for oil spills. According to the Washington State Department of Ecology [PDF], most spills that occur during ship fueling happen because of inattention, inadequate procedure, procedural error, or poor judgment—in other words, human error.

The typically small-in-size spills that come from consuming oil originate from a variety of activities and actually account for most of the oil spilled by humans into the sea.

When the Exxon Valdez oil spill occurred, on the other hand, crude oil was in transport. Since oil is an international commodity and in constant demand, there are always ships, pipelines, and (increasingly) trains moving it around the world.

According to the International Tanker Owners Pollution Federation, occurrences of large spills from tankers and barges (above approximately 2,000 gallons) have decreased dramatically since 1970. This can be attributed at least in part to advances in safety thanks to the Oil Pollution Act of 1990.

While oil extraction is not considered a large source of the overall amount of oil released into the sea each year, spills from offshore oil exploration and drilling can be huge when they do happen. The well blowout that caused Deepwater Horizon spill in the Gulf of Mexico in 2010 is a (very large) example of an oil spill occurring during extraction activities. This type of accident occurs only where oil exploration and drilling operations take place—in the United States, the Gulf of Mexico and waters off the southern California coast are the major areas.

While not technically "oil spills," oil seeps from the ocean floor naturally release oil from subterranean reservoirs and represent the largest source of oil entering seas both in the United States and around the world. Even though seeps are not without their own impacts on marine life, natural oil seeps release oil slowly over time, allowing ecosystems to adapt. During an oil spill, the amount of oil released in a short time can overwhelm an ecosystem.

Impact, then, is not only determined by how much oil is in the environment, but also the type of oil and how quickly it is released.

The May 2015 oil spill at Refugio State Beach was caused by a pipeline break near Santa Barbara, California, adjacent to Coal Oil Point, a region famous for its natural seeps. Oil from seeps there release an estimated 6,500-7,000 gallons of oil per day (Lorenson et al., 2011) and are among the most active in the world. One of the response challenges during that spill was distinguishing between the oil that flowed directly into the ocean from the pipeline break and that from the ongoing seeps.

For a quick glance at the major causes of oil spills in the ocean, check out our infographic:

There are four primary ways oil can end up in the ocean: natural seeps, consumption, extraction, and transportation of oil. (NOAA) Click to enlarge.
Back to top