How Ghost Fishing Is Haunting Our Ocean

OCTOBER 30, 2014 -- No, ghost fishing has nothing to do with ghostbusters flicking fishing rods from a boat. But what is ghost fishing? It's a not-at-all-supernatural phenomenon that occurs when lost or discarded fishing gear remains in the ocean and continues doing what it was made to do: catch fish. These nets and traps haunt the many types of marine life unlucky enough to become snared in them. That includes species of turtles, fish, sharks, lobsters, crabs, seabirds, and marine mammals. Fortunately, the NOAA Marine Debris Program isn't scared off by a few fishing nets that haven't moved on from the underwater world. For example, through the Fishing for Energy partnership, NOAA is funding projects to study and test ways to keep fishers from losing their gear in the first place and lower the impacts lost gear has on marine life and their homes. You can learn more about these four recent projects which are taking place from the South Carolina coast to Washington's Puget Sound. A project at the Virginia Institute of Marine Science at The College of William and Mary will pay commercial fishermen to test special biodegradable panels on crab pots. After a certain amount of time underwater, these panels will break down and begin allowing creatures to escape from the traps. If successful, this feature could help reduce the traps' ghost fishing potential. The researchers also will be examining whether terrapin turtles, a declining species often accidentally drowned in crab pots, will bypass the traps based on the color of the entrance funnel. Another, unrelated effort which NOAA and many others have been supporting for years is focused on fishing out the thousands of old salmon nets lost—sometimes decades ago—in Washington's Puget Sound. These plastic mesh nets sometimes remain drifting in the water column, while other times settling on the seafloor, where they also degrade the bottom habitat. According to Joan Drinkwin of the Northwest Straits Foundation, the organization leading the effort, "They become traps for fish, diving birds, and mammals. Small fish will dart in and out of the mesh and predators will go after those fish and become captured in the nets. And as those animals get captured in the nets, they become bait for more scavengers." You can watch a video about this ongoing project produced by NOAA-affiliate Oregon SeaGrant to learn more about both the problem and the solutions. Thousands of miles away from the Pacific Northwest, ghost nets are also an issue for the otherwise vibrant coral reefs of the Northwestern Hawaiian Islands. Every year for nearly two decades, NOAA has been removing the lost fishing nets which pile up on the atolls and small islands. This year, divers cleared away 57 tons of old fishing nets and plastic debris. One particularly troubling "super net" found this year measured 28 feet by 7 feet and weighed 11.5 tons. It had crushed coral at Pearl and Hermes Atoll and was so massive that divers had to cut it into three sections to be towed individually back to the main NOAA ship. During this year's mission, divers also managed to free three protected green sea turtles which were trapped in various nets. But the origins of this huge and regular flow of old fishing nets to the Northwestern Hawaiian Islands remain a mystery. The islands lay hundreds of miles from any city but also within an area where oceanic and atmospheric forces converge to accumulate marine debris from all over the Pacific Ocean. "You'll go out there to this remote place and pull tons of this stuff off a reef," comments Jim Potemra, an oceanographer at the University of Hawaii at Mānoa, "that's like going to Antarctica and finding two tons of soda cans." You can learn more about the NOAA Marine Debris Program’s efforts related to ghost fishing and why certain types of marine life may be more likely to get tangled up in discarded nets and other ocean trash. 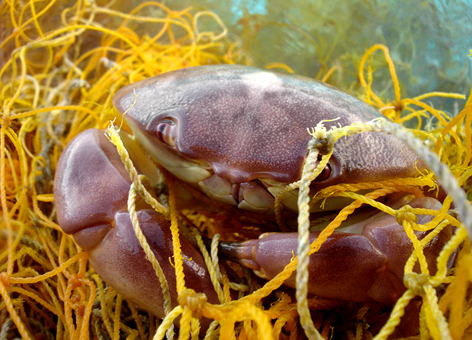 At least 115 species in the United States, including the crab pictured here, have gotten tangled up in marine debris, with lost or discarded fishing gear being especially problematic. (NOAA) 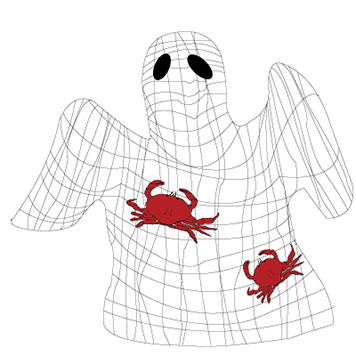 Lost or discarded fishing gear can haunt our ocean for years, continuing to trap marine life until removed. (NOAA)
Back to top