How Is Japan Tsunami Marine Debris Cleaned up on the West Coast? 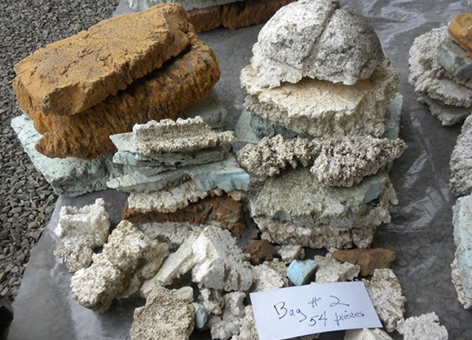 JULY 2, 2012 — Marine debris: This persistent, global problem has received a lot of attention lately. Over the past couple months, debris from the March 2011 tsunami that struck Japan has started to wash ashore on the West Coast. Items such as a fishing boat, an intact Harley Davidson motorcycle, a soccer ball, and a 66-foot dock have been identified and confirmed as tsunami-related debris. These items were traced back to the devastating event, and in the case of the soccer ball, the owner, 16 year-old Misaki Murakami, was reunited with his personal memento given to him by his third grade classmates.

The challenge with all marine debris, including debris from the tsunami, is that it is difficult to trace it back to its origin with certainty. And marine debris, regardless of the source, poses environmental and safety risks and can impact commerce and recreation. So, how is debris handled? It depends on two factors: type and location.

Large pieces of marine debris that pose a hazard to navigation are handled by the Coast Guard. One large item, the dock that washed up in Oregon, is being removed by the state. Oregon Parks and Recreation reports as of June 26, 2012: "The derelict dock at Agate Beach will be dismantled and removed starting the week of July 30 ... Ballard Diving and Salvage (Vancouver, Wash.) has been contracted to complete the work for $84,155. The work will take up to seven days." 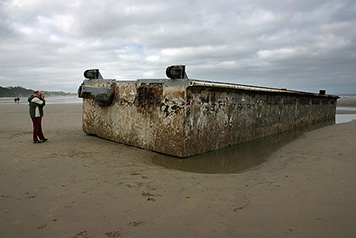 The 66-foot-long floating dock from Japan which washed ashore in Oregon more than a year after the 2011 tsunami. The state is coordinating its removal. (Oregon Parks and Recreation Department)

The U.S. EPA, Coast Guard, the state, or local responders remove hazardous debris found on the beach, such as oil or chemical drums. However, the vast majority of marine debris, small and inert items such as plastic bottles, different types of packaging, buoys, and Styrofoam, are cleaned up by volunteer groups. Here's a case in point: The southwestern coast of Washington state has been impacted by thousands of pieces of small debris—the most prevalent being Styrofoam. Volunteer groups like Grass Roots Garbage Gang have tackled and removed the influx of tons of marine debris from the beaches along the Long Beach Peninsula.

The group mobilized volunteers along miles of shoreline and has packed hundreds of garbage bags with debris. Washington state is also assisting by deploying Washington Conservation Corps teams in a cleanup effort, and in Oregon, the state has set up dozens of disposal stations along the coast. It's important to remember that marine debris is an everyday problem, and its impacts are far-reaching. And, it is thanks to these volunteers and the commitment of West Coast state agencies, nonprofits, supporting industries, federal, local,and Tribal governments that marine debris will be removed as much as possible.