How Much Oil Is on That Ship? 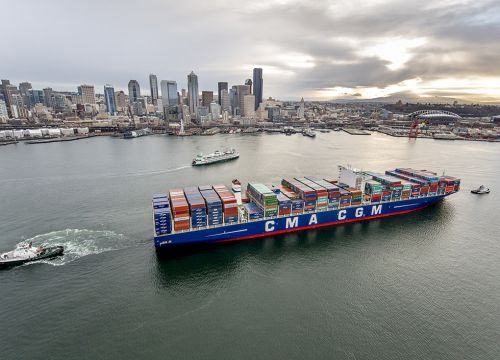 The container ship Benjamin Franklin, the largest cargo ship to visit the United States, arrives in Elliott Bay at the Port of Seattle on February 29, 2016. Credit: Don Wilson/Port of Seattle

MARCH 8, 2016 -- Like many people with an interest in the maritime industry, NOAA's Doug Helton has been following the story of the huge container ship Benjamin Franklin that recently visited Seattle's port.

The news stories about it were full of superlatives.

It was the largest cargo vessel to visit the United States, measuring 1,310 feet in length, or longer than the height of two Space Needles.

This massive ship can carry 18,000 shipping containers, known in the business as 20-foot equivalent units or TEUs. That is more than double the cargo of most container ships calling on the Port of Seattle.

Loaded on a train (and most of them will be) those containers would stretch more than 68 miles, or the distance from Tacoma, Washington, to Everett.

Considering this ship's massive size made Helton wonder how much fuel is on board. After some research, he found out: about 4.5 million gallons. That makes it just a bit bigger than his sailboat which holds only 20 gallons of fuel.

Understanding the potential volumes of oil (either as fuel or cargo) carried on ships is a major consideration in spill response planning.

All tank vessels (tankers and barges) and all non-tank vessels (freighters, cruise ships, etc.) larger than 400 gross tons have to have vessel response plans. Key metrics in those plans include listing the maximum amount of oil that could be spilled (known as the worst case discharge) and the maximum most probable discharge, which, for non-tank vessels, is generally defined as 10% of the vessel's total fuel capacity.

What about other types of vessels? How much oil in the form of fuel or cargo do they typically carry?

Here are some approximate numbers, many of which are pulled from this Washington State Department of Ecology report [PDF]:

Thanks to developing technologies, such "mega-vessels" as the Benjamin Franklin appear to be on the rise, a trend we're watching along with the International Tanker Owners Pollution Federation and University of Washington.

How will these larger ships carrying more oil affect the risk of oil spills and how should NOAA prepare for these changes? Stay tuned.