How Is an Oil Spill in a River Different Than One in the Ocean? 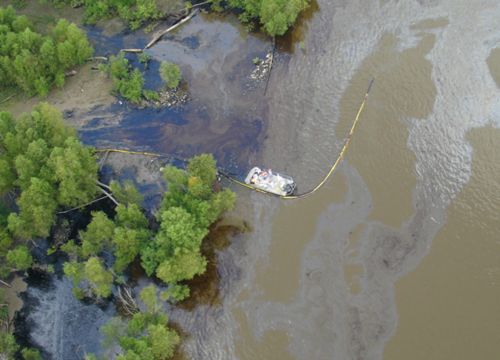 JULY 31, 2015 -- Liquid asphalt in the Ohio River. Slurry oil in the Gulf of Mexico. Diesel in an Alaskan stream. Each of these oil spills was very different from each other, partly because they involved very different types of oils.

But even if the same type of oil were spilled in each case, the results would be just as distinct because of where they occurred—one in a large inland river, one in the open ocean, and one in a small coastal creek.

In many cases, oil tends to float. But just because an oil floats in the saltwater of the Atlantic Ocean doesn't mean it will float in the constantly moving freshwater of the Mississippi River.

But why does that happen? And what else can we expect to be different when oil spills into a river and not the ocean?

To answer the first question: When oil floats, it is generally because the oil is less dense than the water it was spilled into. The more salt is dissolved in water, the greater the water's density. This means that saltwater is denser than freshwater. Very light oils, such as diesel, have low densities and would float in both the salty ocean and freshwater rivers.

However, very heavy oils may sink in a river (but perhaps not on the ocean), which is what happened when an Enbridge pipeline carrying a diluted form of oil from oil sands (tar sands) leaked into Michigan’s flooded Kalamazoo River in 2010. The lighter components of the oil quickly evaporated into the air, leaving the heavier components to drift in the water column and sink to the river bottom. That created a whole slew of new challenges as responders tried new methods of first finding and then cleaning up the difficult-to-access oil. 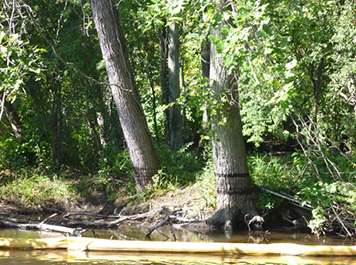 Flooding on the Kalamazoo River in Michigan during the Enbridge pipeline oil spill left a ring of oil around trees and other vegetation after the river returned to its normal level. (NOAA)

Going with the Flow

In rivers, going with the flow usually means going downstream. Except when it doesn't. When might a river's currents carry spilled oil upstream?

At the mouth of a river, where it meets the ocean, a large incoming tide can enter the river and overwhelm the normal downstream currents. That could potentially carry oil floating on the surface back upstream.

In open areas, such as on the ocean surface, both winds and currents have the potential to direct where spilled oil goes. And along most coasts, wind is what brings spilled oil onto shore.

In rivers, however, the downstream currents usually dominate the overall movement of oil while wind direction often determines which side of the river oil ends up on.

Locks and Other Blocks

Left, an aerial view of oil sheen emitting from contaminated vegetation at the Ceresco Dam area on the Kalamazoo River, Michigan, after the Enbridge pipeline spill. (U.S. Environmental Protection Agency) Right, after the M/V Westchester leaked oil on the Mississippi River in 2000, some of the oil was constrained by the riverbanks, making cleanup slightly easier. (NOAA)

Unlike the ocean, rivers sometimes feature structures such as dams, locks, and other barriers that block or slow down the free flow of water. During an oil spill on a river, these structures can also slow down the movement of oil.

That's a helpful feature for responders who are trying to catch up to and clean up that oil. Frequently, dams and locks cause oil to pool up on the surface next to them. Some of the tools responders use to collect oil from these areas include skimmers, which are devices that remove thin layers of oil from the surface, and sorbent pads and booms, which are large squares and long tubes of special material that absorb oil but not water.

In fact, the banks of the river can constrain spilled oil as well. Because the oil can’t spread as far or thin as in open water, oil slicks can be thicker on rivers, and recovery efforts can be more effective.

One exception is the case of flow-over dams, known as weirs. The water passing over weirs can be very turbulent, causing oil to disperse into the water column. If it is very light oil and there’s not very much, that oil tends not to resurface and form another slick. But sheens may resurface with heavier oils that might be broken up going over a weir but later resurface as the water it is traveling in becomes calmer downstream.

Often, plants grow in rivers and line their banks, whereas many parts of the coast are open sandy or rocky beaches, which tend to be easier to clean oil off of than vegetation. (Salt marshes and mangroves being notable oceanic exceptions.) If oil gets past booms, the long floating barriers responders use to prevent the spread of oil, and leaves a coating on plants, then plant cleanup options generally include cutting, burning, treating with chemical shoreline cleaners, or flushing vegetation with low-pressure water.

Plant life actually became an issue during the oil sands spill in Michigan’s Kalamazoo River. Because this river was flooded at the time of the spill and later returned to its normal level, oil on the river surface actually became stranded in tree branches along the riverbanks.

Another issue for oil spills in rivers is sediment. Rivers often carry a lot of sediment in their currents. (How do you think the Mississippi got its nickname "Big Muddy"?) That means when oil droplets drift into the water column of a river, the sediment has the potential to stick to the oil droplets. Eventually (depending on how strong-flowing and full of sediment a river is) some of the oil-sediment combination may settle out to the bottom of the river, usually near the river mouth as the water slows down and reaches the ocean.

One notable example is related to an oil spill that happened on the Mississippi River in New Orleans in 2008. The tanker Tintomara collided with Barge DM932, ripping it in half and releasing all of the heavy fuel oil it was carrying. Downstream of where the responders were cleaning up oil, the Army Corps of Engineers was dredging the sediments that build up at the mouth of the Mississippi and an oily sheen appeared in the collected sediment.

Responders suspected the oil from Barge DM932 had mixed with the river sediment and fell to the bottom further downstream as the river neared the Gulf of Mexico.

Learn more about oil spills in rivers at http://response.restoration.noaa.gov/oil-and-chemical-spills/oil-spills/resources/oil-spills-rivers.html.