Information about Oil Spills Is at Your Fingertips 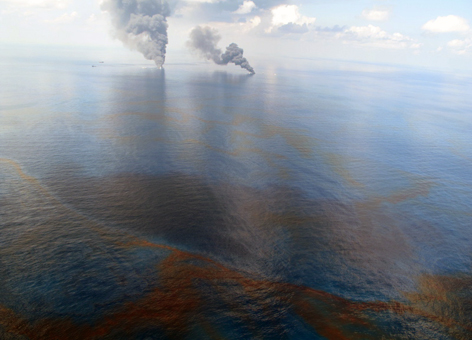 Smoke is visible from controlled burns of the oil released during the Deepwater Horizon oil spill in 2010. This oil well blowout was the largest oil spill in U.S. waters. (NOAA)

JANUARY 20, 2015 -- Where and when was the biggest oil spill? How many oil spills happen each year? Is the frequency of oil spills going up or down? Where can I get information about oil spills?

We at NOAA's Office of Response and Restoration hear these questions often, frequently from high school students looking for help writing their research papers.

We have a lot of information on our website about oil spills in general, as well as those cases in which we have provided scientific expertise during the response.

In addition, we maintain IncidentNews.noaa.gov, which has information on thousands of selected historical incidents spanning 30 years of our experience responding to spills. 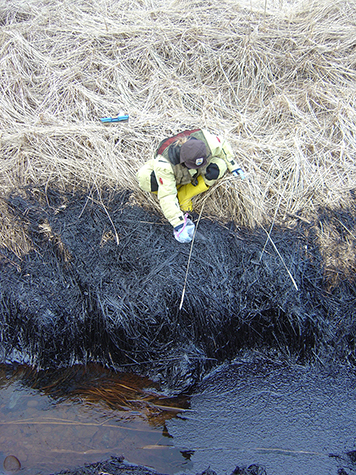 NOAA responds to more than a hundred oil spills in U.S. coastal waters each year. Here, a worker conducts a shoreline survey following the M/V Selendang Ayu grounding and oil spill near the Aleutian Islands, Alaska, in December 2004. (NOAA)

But NOAA only becomes involved with larger, more complex incidents in which scientific expertise is required to track or clean up spilled oil or cases with a significant threat to marine and coastal resources.

Sometimes we get involved before any oil has actually spilled, such as when a ship runs aground on a coral reef and the fuel tanks have not been breached—yet. We typically respond to more than a hundred oil and chemical incidents annually, but there are thousands of smaller spills happening as well, many in marinas and urban and industrial waterways.

So what are some good sources of information on oil spills? For general statistics on oil spills in U.S. waters, we recommend that researchers go to the National Response Center (NRC) section of the U.S. Coast Guard Maritime Information Exchange (CGMIX) website. You'll find the NRC information under the menu, Search CGMIX.

The NRC receives all reports of releases involving hazardous substances, including oil spills. Reports to the NRC activate the National Contingency Plan and the federal government's response capabilities. The NRC maintains reports of all releases and spills in a national database going back to 1990 that you can download and search.

On the international level, the International Tanker Owners Pollution Federation (ITOPF) does a good job of providing data on oil spills from tankers and barges transporting oil. The ITOPF database goes back to 1970, and includes data from a variety of sources including maritime insurers and shipping publications.

One of the interesting trends that ITOPF data shows is that while tanker traffic has increased over the past 30 years, there has been a downward trend in oil spills originating from tankers. In their list of the top 20 tanker accidents, 19 occurred before 1990, or pre-Exxon Valdez. Since then, many oil pollution prevention rules have been put in place and ship navigation tools have been improved. One notable example being the phase out of single-hull tankers.

Another good source of international data is CEDRE, the Centre of Documentation, Research and Experimentation on Accidental Water Pollution, based in Brittany, France. The CEDRE website has a good map and database featuring major oil spills around the world, dating back to 1917.

Speaking of oil spill data, we crunched the numbers on the locations of all of our oil spill-related responses from 2014 and came up with the following infographic: 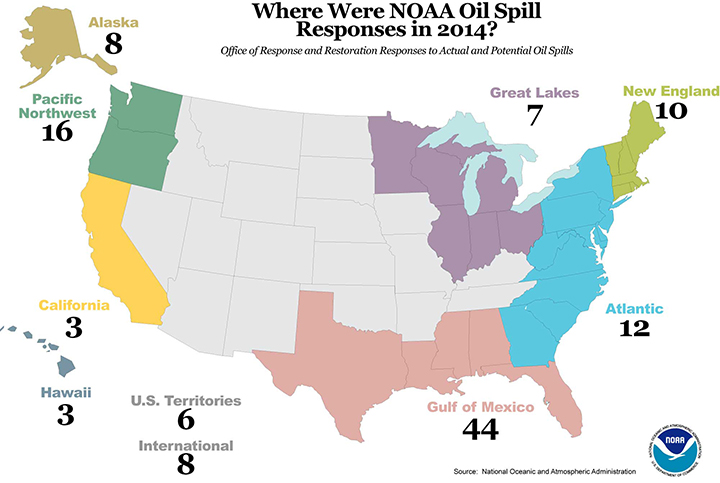 NOAA oil spill responses in 2014, by region. Includes actual and potential oil spills. The Gulf of Mexico, a region which produces and refines a lot of oil, also experiences the most oil spill responses NOAA is involved with of any other region. The U.S. Coast Guard in different regions takes advantage of NOAA support services in different ways, which may account for some of the very low or very high numbers of NOAA responses in various regions. (NOAA)
Back to top