Innovative Solutions to Tackling Plastic Pollution in the Ocean

JUNE 28, 2016 -- This week, we’re exploring the problem of plastics in our ocean and the solutions that are making a difference. To learn more about #OceanPlastics this week, keep your eye on Facebook, Twitter, Instagram, NOAA's Marine Debris Blog, and, of course, here. You don't have to get too fancy in order to help keep plastic and other marine debris out of the ocean. Solutions can be pretty simple: Reducing your use of single-use, "disposable" plastic items; picking up a plastic wrapper littered on the sidewalk; participating in a beach cleanup. (Stay tuned: we'll get deeper into ways you can help later this week.) Sometimes, however, the particulars of this problem can be more complex. Sometimes just getting people's attention and encouraging them to take those simple actions require more creative approaches. We've rounded up a few projects that have our attention, projects which are aimed at making a dent in the many problems associated with ocean plastics. Know of another notable ocean plastics project? Let us know on social media using #OceanPlastics. 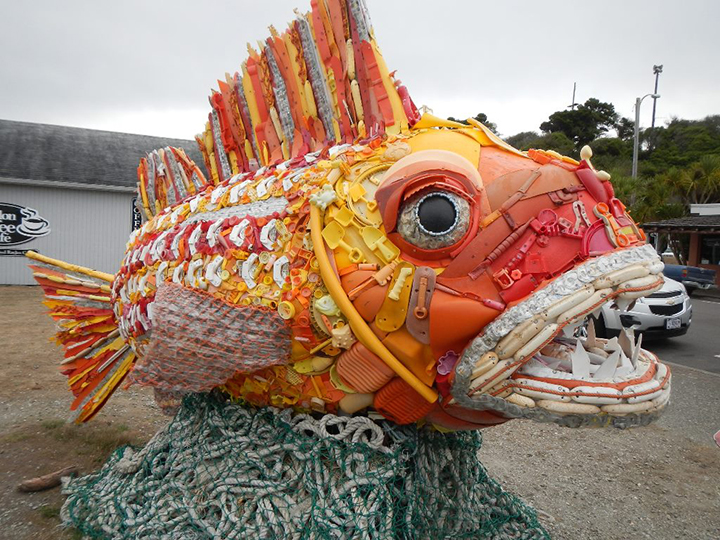 Walking southern Oregon's otherwise beautiful beaches, artist Angela Haseltine Pozzi began despairing how much plastic pollution seemed to appear on its shores. Inspired to turn that pollution into something more positive, she rallied volunteers to clean the beaches and turn the trash into sculptures of the marine life affected by plastic pollution. That's how Washed Ashore was born. In addition to creating these larger-than-life recycled sculptures, Washed Ashore's latest project, funded by the NOAA Marine Debris Program, incorporates theater, movement, and creative writing into a curriculum for teaching students about marine debris. From a sleek marlin to an inquisitive puffin, Washed Ashore's mostly plastic, often massive sculptures serve as dramatic backdrops—and powerful ocean ambassadors—for these educational programs in zoos, aquariums, and museums around the country. According to Washed Ashore, since its inception in 2010, the program has processed 38,000 pounds of marine debris, turning it into more than 60 sculptures. 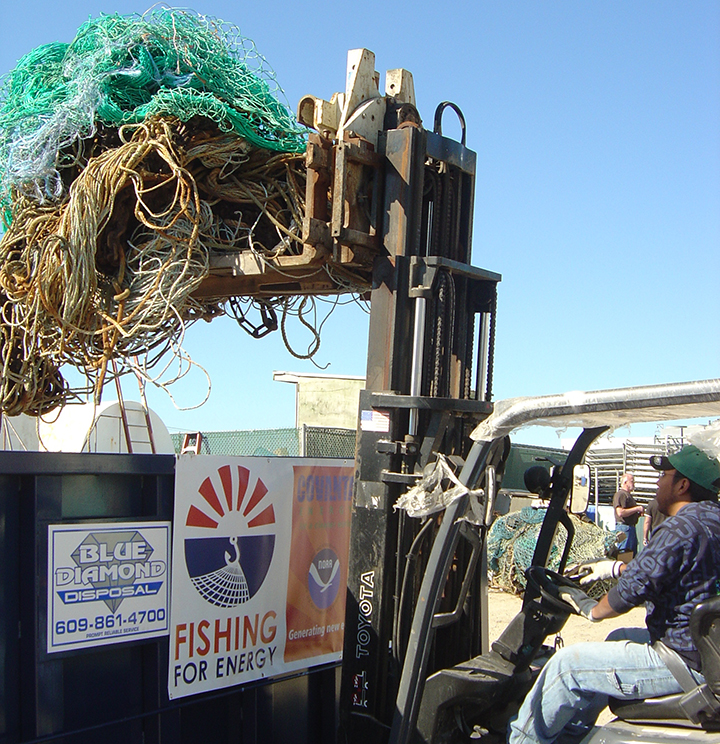 Since begun in 2008, the Fishing for Energy partnership has removed and diverted 3 million pounds of fishing gear from the ocean. (Credit: National Fish and Wildlife Foundation)

The Fishing for Energy partnership helps fishermen properly dispose of old and abandoned fishing nets and other gear—much of it plastic—at no cost to the fishermen. In addition to donating their own worn-out nets, some fishermen also directly retrieve lost fishing gear out of the ocean. After being collected and sorted, any metal parts are recycled, and everything else is converted into electricity, with roughly one ton of old nets producing enough electricity to power a house for 25 days. The National Fish and Wildlife Foundation works with the NOAA Marine Debris Program, Covanta, and Schnitzer Steel Industries, Inc. to carry out this partnership, which has expanded to include funding other projects that seek to prevent or remove lost fishing gear in U.S. coastal waters. Since it started in 2008, the Fishing for Energy partnership has removed and kept 3 million pounds of fishing gear out of the ocean.

Plastic straws, cups, plates, bags, forks, and spoons turn up among the most frequently found items at beach cleanups year after year. Eating with these so-called "disposable" plastics creates huge amounts of waste, and the Clean Water Fund, with the support of the NOAA Marine Debris Program, is working to stem this flow of food-related plastics coming from restaurants in California’s San Francisco Bay region. Through their ReThink Disposable campaign, Clean Water Fund is collaborating with local food businesses and institutional food services by auditing their waste and helping to find more sustainable alternatives to disposable plastic food and beverage packaging. They're also working with the businesses to communicate to the public the benefits of cutting down on this type of waste and how it impacts the environment. One of them, El Metate Restaurant, a fast-casual Mexican restaurant, swapped plastic cutlery and salsa cups, previously provided to both dine-in and take-out customers, for reusable metal cutlery and ceramic salsa bowls. After implementing these changes, not only did El Metate manage to keep 493,711 disposable food ware items out of the landfill (and coastal waters) each year, but the changes improved the dining experience, increased dine-in customers, and is saving nearly $9,000 a year. 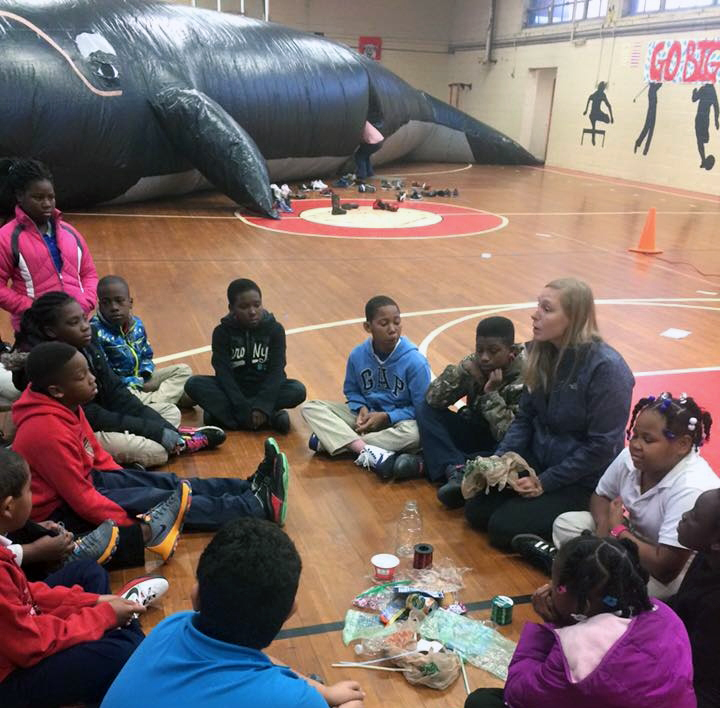 Few things can communicate the scale of plastic's impacts on wildlife like walking inside a life-sized inflatable whale and "dissecting" its organs to uncover the marine debris it's swallowed. That's exactly what middle and elementary school kids in rural North and South Carolina have the opportunity to do through the University of North Carolina Wilmington MarineQuest's Traveling Through Trash program, which received funding from the NOAA Marine Debris Program. People have found plastic bags, rope, juice packs, broken CD cases, and much more inside dead whales. Watson, the 58-foot-long inflatable right whale, offers students the chance to experience this reality close up and learn how they can take responsibility for keeping trash, no matter where it comes from, far away from the ocean and marine life. During the 2015-2016 school year, Watson the Whale traveled more than 8,000 miles and taught more than 9,500 students about how trash affects migrating marine species. 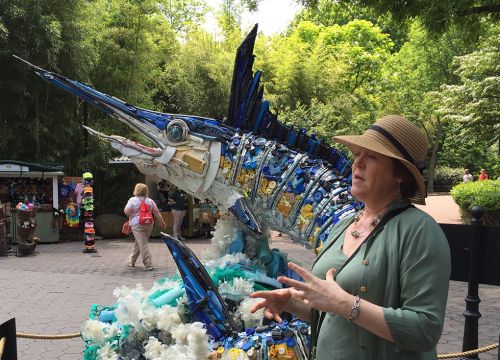 Washed Ashore Executive Director Angela Haseltine Pozzi leads a lesson on how marine debris can be used as a powerful art medium to engage students on the topic while at the Smithsonian's National Zoo. Behind her is one of her organization's marine life sculptures crafted entirely from trash retrieved from the ocean and coasts. (NOAA)
Back to top