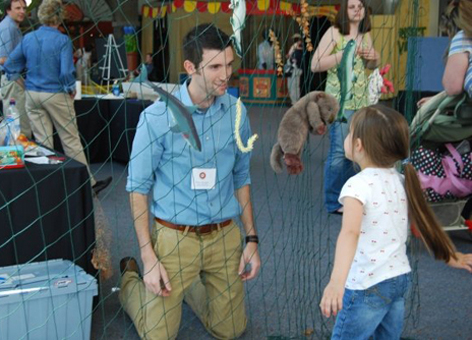 NOAA marine debris expert Peter Murphy has some fun teaching a child about trash in our oceans. (NOAA)

OCT. 19, 2012 — Most of us have seen marine debris in its smaller forms—water bottles, plastic bags and other consumer waste. But it can also take the form of abandoned vessels, drifting fishing nets, and even lost crab pots on the ocean bottom, still catching sea life long after they are lost. Peter Murphy is the Alaska Coordinator for the NOAA Marine Debris Program, which supports national and global efforts to research, prevent, and reduce the impacts of marine debris. Murphy and his colleagues work to understand these impacts and communicate them to policy-makers, stakeholders, and the public. Alaska, with its massive and remote coastline, significant coastal resources, and strong marine economy and culture, is a dynamic and important part of the marine debris landscape. Here, Murphy gives us the insider view of working at NOAA and what it takes to help keep trash off our coasts and out of the ocean.

Why is your work important?

Marine debris is an everyday, global problem that can have big impacts on natural resources, the economy, navigation, and even human health and safety. For example, derelict nets and traps can continue to fish for years after they're lost, and microplastics can be ingested by many different species. However, there's something people can do about it by making more sustainable choices in what they use, how they use it, and how they dispose of it. Doing research on the impacts and finding ways to communicate those findings to change behaviors is an important link that we work to make in the Marine Debris Program. I focus on Alaska, which has more coastline than the rest of the United States combined and a huge amount of natural resources, so there is even more opportunity for impact and for action.

What part of your job with NOAA did you least expect to be doing?

Working with detection technologies—satellites, radar, and especially sonar—was definitely an unexpected element of my work, but a very rewarding one. Translating sonar tracks into a map that guides divers to retrieve and examine crab pots 100 feet below the surface is a fun challenge.

If you could invent any tool to make your work more efficient and cost were no object, what would it be? Why?

First: A remote sensor that could definitively and reliably detect debris greater than one millimeter in size. One of our challenges is that we know there are areas of concentration in the open ocean, but when they go undetected, we don't know if it is because there isn’t anything there to detect (unlikely) or because our sensors can't pick up everything that’s there (more likely). Knowing that would help our work in assessing density, impacts, and behavior of debris. Second: A small, sturdy, reliable, and inexpensive device to convert plastics (including Styrofoam) into liquid fuel. Small communities in Alaska often do beach cleanups, but have nowhere to put the debris—primarily plastics—that washes ashore from all over the Pacific Rim. This would give them a way to not only empty their landfills, but provide a direct benefit in the form of energy for the work they do.

How did you become interested in communicating about science?

As I learned more about the oceans and the fascinating interconnections across the many systems that make it all work, I wanted to be able to explain and share that information in an accessible way. Seeing a concept—derelict fishing gear, ocean circulation, or plastic degradation—click for somebody at a booth we're hosting or during a presentation we're giving is a great feeling.

When did you know you wanted to pursue a career in science?

I was always fascinated with how things worked. My grandfather, an engineer at Boeing, gave me a subscription to Popular Mechanics as a kid, and I became fascinated with how people worked to innovate and solve problems using science. That respect and fascination stuck with me all through school.