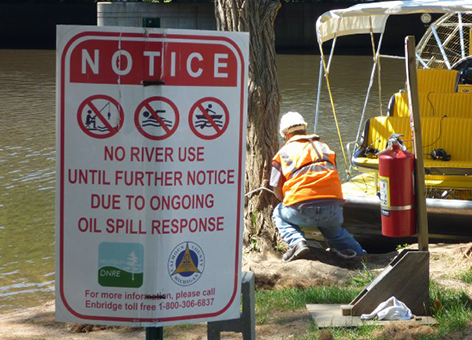 The Kalamazoo River has been closed to the public since the spill in 2010. The natural resource trustees are examining the effect the spill had on public recreation and on tribal cultural uses. (Terry Heatlie, NOAA)

FEB. 13, 2012 — On July 26, 2010, an underground pipeline in southern Michigan ruptured, eventually leaking oil approximately forty* miles down the Kalamazoo River. Since then, NOAA's Office of Response and Restoration has been investigating the environmental impacts from this spill.

Along with NOAA, the U. S. Fish and Wildlife Service, the State of Michigan, and the Huron Band and Gun Lake Tribe of the Potawatomi have joined together as trustees to determine damages to natural resources that this spill caused.

The leaking pipeline, owned by Enbridge Energy, released more than 800,000 gallons of crude oil into wetlands near Marshall, Mich., and later into the Kalamazoo River.

The flooded river left oil stranded on overhanging branches and in floodplains, which are host to forests, wetlands, and sensitive seasonal ponds. These ponds provide valuable habitat for fish and aquatic invertebrates at the base of the food chain.

We've conducted a variety of studies to collect information on the impacts of the spill (such as how far the oil extended into the floodplain and what it contacted while there) and repeated some of the studies to see how the environment is recovering. We're gathering all this data for the official damage assessment.

We've examined samples of fish, mussels, water, and sediments for evidence of oil-related chemicals. We'll analyze our observations of oiled vegetation and the number and condition of animals brought to the wildlife rehab center.

Unfortunately, cleanup-related activities have an environmental impact too. For example, extra boat traffic on the river during cleanup led to some riverbank erosion and crushed freshwater mussels. Our studies include these factors too. We'll also look into the effect the spill had on public recreation (the river has been closed to the public since the spill) and on tribal cultural uses.

Soon, we and the other natural resource trustees will seek out restoration projects that address the impacts of the spill, being careful to balance the projects with the results of our studies. We'll take project ideas from the public and from watershed organizations to make sure that we choose projects that fit in well with other restoration work being done across the broader Kalamazoo River watershed.

Enbridge, as the owner of the pipeline, will have the option to implement the projects themselves with oversight from us trustees, or could pay for the cost of these projects as part of a larger legal settlement.

*Correction: This originally stated that the oil flowed thirty miles down the Kalamazoo River.