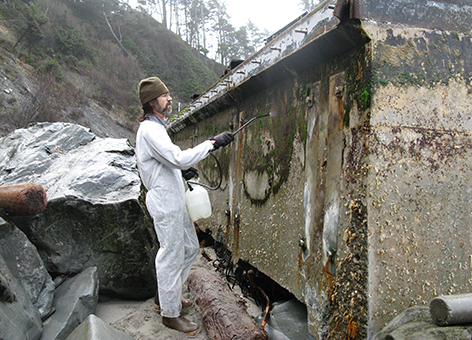 January 3, 2013 -- A worker uses a 30% bleach spray to decontaminate and reduce the spread of possible marine invasive species on the Japanese dock which made landfall on Washington’s Olympic Peninsula in December 2012. (Washington Department of Fish and Wildlife/Allen Pleus)

JAN. 18, 2013 — The Japanese Consulate has confirmed that a 65-foot, concrete-and-foam dock that washed ashore in Washington's Olympic National Park in late December 2012 is in fact one of three* docks missing from the fishing port of Misawa, Japan. These docks were swept out to sea during the earthquake and tsunami off of Japan in March 2011, and this is the second dock to be located.

The first dock* appeared on Agate Beach near Newport, Ore., in June 2012. Using our trajectory forecast model, NOAA's Office of Response and Restoration helped predict the approximate location of the dock after an initial sighting reported it to be floating somewhere off of Washington’s Olympic Peninsula. When the dock finally came aground, it ended up both inside the bounds of NOAA's Olympic Coast National Marine Sanctuary and a designated wilderness portion of Olympic National Park.

According to the Washington State Department of Ecology, representatives from Olympic National Park, Washington State Department of Fish and Wildlife, and Washington Sea Grant Program have ventured out to the dock by land several times to examine, take samples, and clean the large structure. Initial results from laboratory testing have identified 30‐50 plant and animal species on the dock that are native to Japan but not the United States, including species of algae, seaweed, mussels, and barnacles.

In addition to scraping more than 400 pounds of organic material from the dock, the team washed its heavy side bumpers and the entire exterior structure with a diluted bleach solution to further decontaminate it, a method approved by the National Park Service and Olympic Coast National Marine Sanctuary. 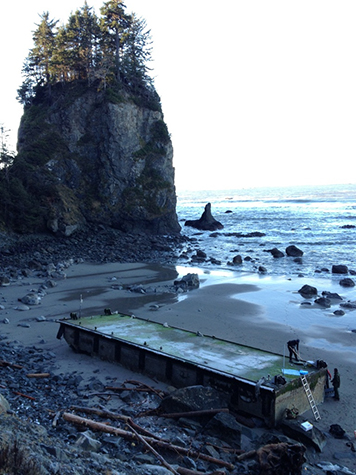 In order to minimize damage to the coastline and marine habitat, federal agencies are moving forward with plans to remove the dock. In addition to being located within a designated wilderness portion of Olympic National Park, the dock is also within NOAA’s Olympic Coast National Marine Sanctuary and adjacent to the Washington Islands National Wildlife Refuge Complex. (National Park Service)

Government representatives are examining possible options for removing the 185-ton dock from this remote and ecologically diverse coastal area. Look for more information and updates on Japan tsunami marine debris at http://marinedebris.noaa.gov/tsunamidebris/.

*[UPDATE 4/5/2013: This story originally stated that four docks were missing from Misawa, Japan and that "the first dock was recovered shortly afterward on a nearby Japanese island." We now know only three docks were swept from Misawa in the 2011 tsunami.]