From Kayaking to Carbon Storage, What We Stand to Gain (and Lose) from Our Coasts

This week, NOAA's Office of Response and Restoration is looking at the range of values and benefits that coastal areas offer people—including what we stand to lose when oil spills and chemical pollution harm nature and how we work to restore our lost uses of nature afterward. This is a guest post by Stefanie Simpson of Restore America’s Estuaries. APRIL 4, 2016 -- Estuaries, bays, inlets, sounds—these unique places where rivers meet the sea can go by many different names depending on which region of the United States you’re in. Whether you’re kayaking through marsh in the Carolinas, hiking through mangrove forest in the Everglades, or fishing in San Francisco Bay, you are experiencing the bounty estuaries provide. Natural habitats like estuaries offer people an incredible array of benefits, which we value in assorted ways—ecologically, economically, culturally, recreationally, and aesthetically. Estuaries, where saltwater and freshwater merge, are some of the most productive habitats in the world. Their benefits, also called "ecosystem services," can be measured in a variety of ways, such as by counting the number of birding or boating trips made there or by measuring the amount of fish or seafood produced. If you eat seafood, chances are before ending on up your plate, that fish spent at least some of its life in an estuary. Estuaries provide critical habitat for over 75% of our commercial fish catch and 80% of our recreational fish catch. Coastal waters support more than 69 million jobs and generate half the nation’s Gross Domestic Product (GDP) [PDF]. Estuaries also improve water quality by filtering excess nutrients and pollutants and protect the coast from storms and flooding. Another, perhaps less obvious, benefit of estuaries is that they are also excellent at removing carbon dioxide from the atmosphere and storing it in the ground long-term. In fact, estuary habitats like mangroves, salt marshes, and seagrasses store so much carbon, scientists gave it its own name: blue carbon. How do we know how much carbon is in an estuary? Scientists can collect soil cores from habitats such as a salt marsh and analyze them in the lab to determine how much carbon is in the soil and how long it's been there. But you can also see the difference. Carbon-rich soils are made up of years of accumulated sediment and dead and decaying plant and animal material. These soils are dark, thick, and mucky—much different from the sandy, mineral soils you might find along a beach.

Science continues to improve our understanding of ecosystem services, such as blue carbon, and their value to people. For example, in 2014 a study was conducted in the Snohomish Estuary in Washington's Puget Sound to find out just how much carbon could be stored by restoring estuaries. The study estimated that full restoration of the Snohomish Estuary (over 9,884 acres) would remove 8.9 million tons of carbon dioxide from the atmosphere—that's roughly equal to taking 1,760,000 cars off the road for an entire year. Estuary restoration would not only help to mitigate the effects of climate change but would have a positive cascading effect on other ecosystem services as well, including providing habitat for fish, improving water quality, and preventing erosion. Healthy estuaries provide us with so many important benefits, yet these habitats are some of the most threatened in the world and are disappearing at alarming rates. In less than 100 years, most of these habitats may be lost, due to human development and the effects of climate change, such as sea-level rise. When we lose estuaries and other coastal habitats, we lose all of the ecosystem services they provide, including carbon storage. When coastal habitat is drained or destroyed, the carbon stored in the ground is released back into the atmosphere and our coast becomes more vulnerable to storms and flooding. It is estimated that half a billion tons of carbon dioxide are released every year due to coastal and estuary habitat loss. These benefits can also be compromised when coastal habitats are harmed by oil spills and chemical pollution. People also feel these impacts to nature, whether because an oil spill has closed their favorite beach or chemical dumping has made the fish a tribe relies on unsafe to eat. Scientists and economists continue to increase our understanding of the many benefits provided by our coastal habitats, and land managers use this information to protect and restore habitats and their numerous services. Stay tuned for more this week as NOAA's Office of Response and Restoration and Restore America's Estuaries explore how our use of nature suffers from pollution and why habitat restoration is so important. Stefanie Simpson is the Blue Carbon Program Coordinator for Restore America's Estuaries where she works to promote blue carbon as a tool for coastal restoration and conservation and coordinates the Blue Carbon National Network. Ms. Simpson is also a Returned Peace Corps Volunteer (Philippines 2010-12) and has her Master of Science in Environmental Studies. The views expressed here reflect those of the author and do not necessarily reflect the official views of the National Oceanic and Atmospheric Administration (NOAA) or the federal government. 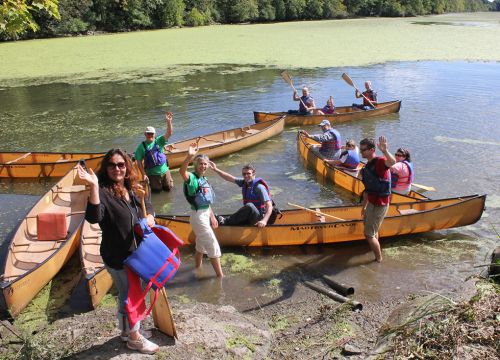 When coastal habitats are damaged or destroyed, we lose all of the benefits they provide, such as carbon storage and places to canoe. (NOAA)
Back to top