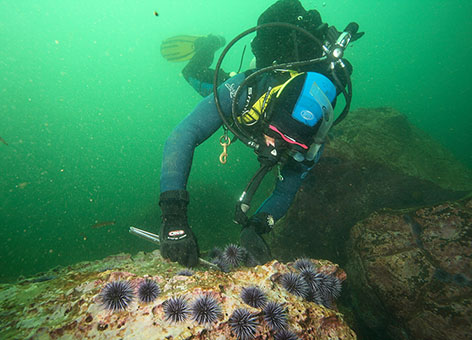 A volunteer diver removes urchins from an urchin barren to encourage the settlement of kelp larvae.

JULY 23, 2013 -- After 15 years of scientific monitoring, research, and planning, the Santa Monica Bay Restoration Foundation (SMBRF), with funding and technical assistance from NOAA's Montrose Settlements Restoration Program (MSRP), begins a large-scale kelp forest restoration project off the coast of California's Palos Verdes peninsula this July. The foundation will bring kelp forests back to life in an area that has experienced a 75% loss of kelp canopy. Nearly 100 acres of reef habitat along the Palos Verdes coast is covered by "urchin barrens," where the densities of urchins are extremely high and kelp plants are non-existent. Sea urchins are spiny marine invertebrates that live on rocky reef substrates and feed mostly on algae. When sea urchin populations are kept stable, they are an important part of a healthy kelp forest ecosystem. On the other hand, in an "urchin barren," urchin densities get very high because predators rarely feed on urchins, preferring the greater cover and higher productivity of healthy kelp forests. The urchins in barrens are also in a constant state of starvation, continually expanding the barren area by eating every newly settled kelp plant before the kelp has a chance to grow. These urchins are of no value to fishermen and urchin predators because they are undernourished, small, and often diseased. To bring back the kelp forests, volunteer divers, commercial urchin divers, researchers, and local nonprofit groups will assist SMBRF with removing urchins from the "urchin barrens" and allow for natural settlement of kelp plants. Divers' removal of the urchins will allow for kelp plants to grow and mature, which can happen quickly since the plants often grow up to two feet per day. Within a year, SMBRF expects that many of the characteristics of a mature kelp forest will return, including providing suitable fish habitat for important commercial and recreational fish species. The mature kelp forest will support greater numbers of urchin predators, such as birds, fish, crabs, lobsters, octopuses, sea stars, and sea otters, which will help to maintain more sustainable levels of urchin populations in the future. NOAA's Montrose Settlements Restoration Program is providing funding for this project as part of its plan to restore fish habitat in southern California. MSRP was developed in 2001 following a case settlement against polluters that released the toxic agricultural and industrial chemicals DDTs and PCBs into the southern California marine environment. MSRP has allocated settlement funds to restore natural resources that were harmed by these chemicals, including impacts to fish habitat due to their presence in ocean sediments. 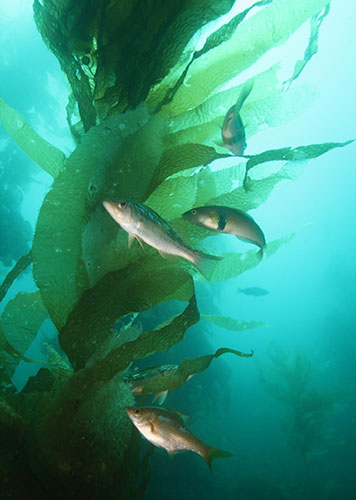