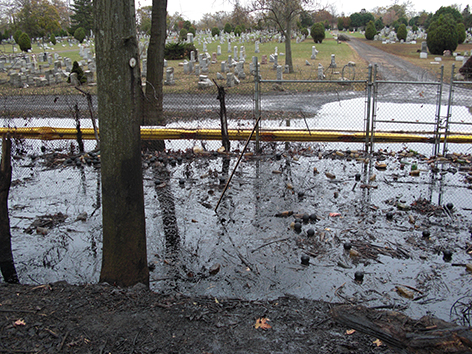 Protective boom is placed to prevent floating oil from further reaching a cemetery near the Phillips 66 Refinery in Linden, New Jersey. (NOAA)

NOV. 9, 2012 — In anticipation of the winter storm which came on the heels of Hurricane Sandy, spill response teams based on New York's Staten Island temporarily closed down operations November 7. They have now resumed hazardous spill response activities with little fallout from the storm's strong winds and heavy snows.

NOAA's Office of Response and Restoration is continuing aerial surveys of Arthur Kill, the waterway spanning New Jersey and New York which experienced several hazardous spills in the wake of Hurricane Sandy. These surveys serve as reconnaissance for responders managing the oil spill cleanup. Major response operations for the diesel spilled at the Motiva Refinery in Sewarren, N.J., are beginning to wind down, while cleanup of the biodiesel spilled at the Kinder Morgan terminal in Carteret, N.J., is nearly complete.

At the site of a spill at the Phillips 66 Refinery in Linden, N.J., plenty of heavy waste oil remains to be cleaned up. Despite initial concerns, this week’s nor'easter storm did not wash any of the oil trapped on shore at the Phillips 66 Refinery into the Arthur Kill waterway. In order to prevent further pollution from the many damaged or displaced vehicles, vessels, and tanks in the area, Coast Guard responders are starting to post pollution notices on those items which could contain oil or hazardous materials.

"Because these damaged tanks and vessels threaten both the marine environment and public health, we want to work quickly to identify the owners and reduce negative impact," Coast Guard Cmdr. Eric Doucette, Federal On Scene Coordinator for the pollution response said in a press release Nov. 9. 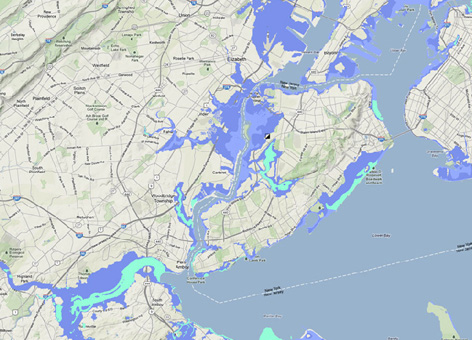 To help manage the slew of environmental and response information for the Hurricane Sandy response, both NOAA and the U.S. Coast Guard are using ERMA® (Environmental Response Management Application), a web-based GIS tool. NOAA staff at the Staten Island, N.Y., command post are loading response data such as post-hurricane satellite imagery, storm surge coverage, field team aerial survey photos, and pollution locations. They are also working with other agencies, including EPA, FEMA, and the states of New York and New Jersey, to obtain and share data. Having this information in ERMA helps responders in the command post, as well as those not present on scene, to visualize the response operations and aids in making decisions about the response.

Stay tuned for more photos, maps, and updates on the pollution-related response efforts at IncidentNews.