In a Louisiana Marsh, an Uncommon Opportunity to Learn about Burning Oil

JULY 1, 2014 -- "Every day is a new adventure." LTJG Kyle Jellison came to believe this phrase while sailing on the high seas, but it has proven true in his role as a NOAA Scientific Support Coordinator as well. There have been many adventures in his time working in the Gulf of Mexico doing emergency response for oil spills and hazardous materials releases. The most recent oil spill—a pipeline leak in a Louisiana marsh—didn't seem out of the ordinary, that is, until the Unified Command in charge of the response turned to alternative approaches to quicken and improve the effectiveness of the cleanup.

The Spill and Our Options

On May 28, 2014 a plane hired by Texas Petroleum Investment Company was performing a routine aerial survey of their inland oilfield and noticed a slight oil sheen and a dead clump of roseau cane (phragmites). This sparked further investigation and the discovery of 100 barrels (4,200 gallons) of crude oil, which had leaked out of a breach in their pipeline passing through the Delta National Wildlife Refuge, outside of Venice, Louisiana. Pipelines like this one are routinely inspected, but as they age the potential for corrosion and spills increases. Roseau cane is a tall, woody plant, similar to bamboo, reaching heights of up to 20 feet. The stalks grow very close together and in water depths between two and 30 inches. This creates a complex situation which is very hard to clean oil out from. The least invasive method for oil cleanup is to flush out the oil with high volumes of water at low pressure, but this is a long process with low amounts of oil recovered each day. Another common practice is to flush with water while cutting lanes into the vegetation, creating pathways for the oil to migrate along for recovery. Though more aggressive and with higher amounts of oil recovered each day, it still would likely take many weeks or months to clean up this particular oil spill using this method.

What about doing a controlled burn of the oil where it is, a strategy known as in situ burning? It removes a large amount of oil in a matter of days, and when performed properly, in situ burning can help marsh vegetation recover in five years or less for more than 75 percent of cases in one study. In situ burning, Latin for burning in place, is considered an "alternative" response technology, rather than part of the regular suite of cleanup options, and is only employed under the right set of circumstances. More information about this can be found in the NOAA report "Oil Spills in Marshes," which details research and guidelines for in situ burning in chapter 3, Response. 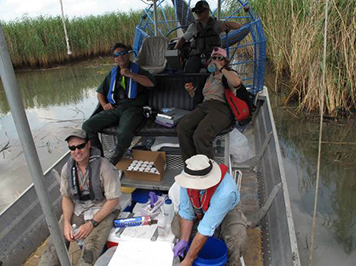 To help determine if burning was appropriate in this case, the Unified Command brought in the NOAA Scientific Support Team, U.S. Fish and Wildlife Service Fire Management Team, U.S. Coast Guard Gulf Strike Team, and T&T Marine Firefighting and Salvage. After considering the situation, gaining consensus, developing a burn plan, and earning the support of Regional Response Team 6, it was time to light it up!

On June 3, 2014, we burned the oil for two hours, with flames reaching 40 feet. The next day, we burned for another six hours. There was a lot of oil to be burned, with pockets of oil spread throughout three acres of impacted marsh. The fire remained contained to the area where enough oil was present to support the burn, extinguishing once it reached the edge of the oiled marsh. We have an ongoing study to evaluate the impacts of the burn, and preliminary results indicate that there was minimal collateral damage. More than 70 percent of the oil was burned over the two-day period. We considered this to be a very successful controlled burn. The much less remaining oil will be recovered by mechanical methods within a few weeks, instead of months. Texas Petroleum Investment Company, as the responsible party in this case, will be responsible for all costs incurred for this incident, including cleanup and monitoring (and restoration, if necessary). 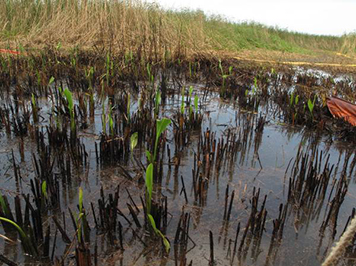 Some elephant ear (taro) plants began to regrow within seven days of burning, growing up to 18 inches. (NOAA)

To help ensure we learn something from this incident, an assessment team entered the impacted marsh before the burns to collect oil, water, and sediment samples. The team also collected samples after each day of burning and returned a week after the burn to assess the condition of the vegetation and collect samples. This multi-agency team will return to the site in August for more sampling and monitoring. The long-term monitoring and sampling project is being managed by NOAA, Louisiana Department of Environmental Quality, Fish and Wildlife Service, and Texas Petroleum Investment Company. We are conducting the study under the umbrella of the Response Science and Technology Subcommittee of the New Orleans Area Committee, a standing body of response scientists. Jeff Dauzat of Louisiana Department of Environmental Quality and LTJG Jellison co-chair this subcommittee and are looking forward to the results of this ongoing scientific project. Was burning the right move? The science will speak for itself in time. For more information: 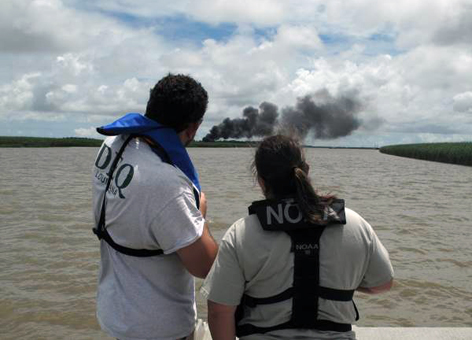 NOAA and Louisiana Department of Environmental Quality supervise the marsh in situ burn from a safe distance. (NOAA) 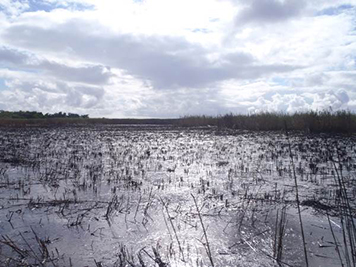 The marsh with roseau cane (phragmites) after the burn, with residual oil still visible on the water surface. (NOAA)
Back to top