Making the Best of a Catch in Whale-Friendly Lobster Fishing 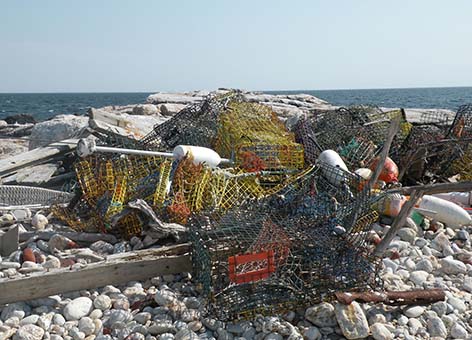 SEPT. 12, 2012 — Derelict fishing gear is a prevalent type of marine debris throughout the oceans, and like other forms of marine debris, it is a complicated issue without a clear solution. In New Hampshire and throughout New England states, regulations designed to protect important marine species and the personal property of lobstermen have unintentionally led to a significant marine debris issue.

To understand the issue, it's important to understand how the lobster fishery works in New England. Lobsters are caught using metal or wooden lobster "pots," which can be deployed in a number of configurations based off of the following general diagram. For many more configurations in addition to the one below, check out the Maine Lobstermen's Association 2012 Gear Report [PDF].

The diagram highlights two important gear modifications designed to prevent harmful interactions between local marine mammals and lobster gear that have also contributed to the marine debris issue: the weak link and sink line. The weak link is designed to allow the buoy to easily disconnect from the sink line if a marine mammal comes in contact with it. However, the buoy can also easily detach if a boat accidentally hits it, which can ultimately lead to lost gear. 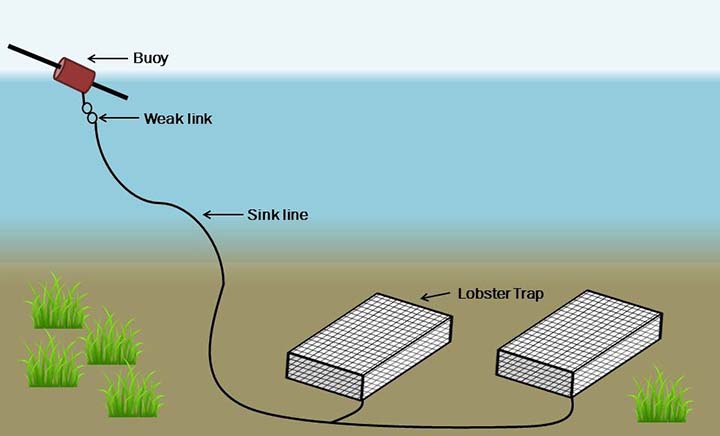 Up until 2009, the loss of traps through these accidental encounters with boats was mitigated through float lines; if the buoy was disconnected, the line attached to all of the lobster pots would at least still float at the surface. However, these float lines also posed a threat to marine mammals, which could become entangled. Regulations now require that sink lines are used on lobster pots. While the weak link and the sink line are important for marine mammals, these modifications can cause lobster pots to become marine debris.

Once lost, the derelict lobster pots can negatively impact the marine environment and economy. Lost pots can continue to fish for target and non-target species (known as "ghostfishing"), many times capturing and killing either protected or commercially important organisms. In addition, strong water currents can drag pots along the bottom, scouring and damaging sensitive marine habitats. Strong storms can even move lobster pots out of the water, impacting coastal habitats as well. The lost pots can also hinder the lobster fishery, by taking up prime real estate on the seafloor that could otherwise be used for fished pots.

While the derelict fishing gear issue poses a great problem, regulations in coastal New England states designed to protect the property of lobstermen unintentionally make cleanup of derelict pots difficult. In states such as Massachusetts, New Hampshire, and Maine (among others), removing or even touching fishing gear belonging to someone else is prohibited, even if the gear is unfishable. These laws were established when lobster pots were frequently being stolen to make lobster pot coffee tables. These regulations are important and remain to protect the catch and property of lobstermen; however, they hinder gear cleanups as a local regulatory official must be present at the cleanup to determine if gear can be removed.

While the ultimate solution lies in finding a way to prevent gear from being lost in the first place, the Fishing for Energy program provides a solution to cleaning up the gear currently present. In addition to the general program that provides bins for derelict gear disposal, each year a Fishing for Energy grant program offers competitive funding for groups to conduct assessments and removal of derelict fishing gear throughout the United States. Successful projects are required to engage fishermen and, in states where necessary, state marine regulatory officials. Engaging fishermen helps to increase awareness of the derelict fishing gear issue throughout the fishing community, and involving local regulatory officials alleviates legal hindrances to gear removal. As with the bin program, all collected gear is recycled or burned as a source of renewable energy with the help of Schnitzer Steel or Covanta Energy.