On the Maryland side of the Potomac River, just east of Washington D.C. and west of Chesapeake Bay, the largest shipwreck fleet in the Western Hemisphere sits partially sunken and decomposing. Following World War I, hundreds of U.S. vessels were sent to Mallows Bay to be scrapped—and to this day, the remains of dozens can still be seen in the shallow waters.

The story of the ships at Mallows Bay begins when the U.S. entered World War I. In April 1917, the country had an adequate number of warships but a shortage of transport vessels, which led President Woodrow Wilson to approve the greatest shipbuilding program in history, with an order for a thousand 300-foot wooden steamships to be built in only 18 months! Germany would surrender on November 11, 1918. At this time, the government had already approved funding and paid for 731 of these wooden transport vessels. Despite the war being over, the ship building continued. By September 1919, contractors had delivered 264 steamships to the government but only 195 had crossed the Atlantic Ocean. By this time, the war had ended and the U. S. had no use for the ships. In September of 1922, 233 vessels (representing the bulk of the fleet) were sold for $750,000 to the Western Marine and Salvage Company. This was a remarkable price, considering the cost of constructing just one ship had been $1,000,000. The company towed the fleet to an authorized mooring area near Widewater, Virginia to recover the scrap metal.

As described by John H. Lienhard in The Wooden Ships of Mallows Bay (University of Houston, College of Engineering): “By late 1919, 264 wooden steamers were in operation. Most had crossed the Atlantic, but they were slow and leaky. They'd been made obsolete by the new Diesel engines. The idea was to strip them of hardware, burn them down to the waterline, haul them off to a nearby marsh, then burn what was left. Once more it all went wrong—civic protests, problems with blocked shipping lanes, and finally the Great Depression.”

As World War II approached, the threat of war saw the price for scrap metal skyrocket. The U.S. government allocated $200,000 to Bethlehem Steel in the early 1940s to recover over 20,000 tons of iron thought to still be in the wrecks of Mallows Bay. The effort turned out to be cost ineffective. By 1943, Bethlehem Steel terminated the program with little iron recovered and over 100 ship hulks languishing in the bay. So there the vessels sat, rotting away for decades. In March of 1993, the State of Maryland awarded a grant to a group of researchers to study the effects of these derelict vessels on the environment, and to inventory what vessels remained for historical and archaeological purposes.

Over the next two years, the researchers identified 88 wooden ships left over from the original program. Researchers also discovered that the bay was used by Western Marine for more than just these wooden steamships; twelve barges were discovered, as well as a Revolutionary War-era longboat, several 18th century schooners, miscellaneous workboats, and even automobile ferries like the S.S. Accomac. The researchers also discovered that the vessels had created a unique ecosystem in the Bay that supported numerous fish and birds species. In 2014, Mallows Bay, including the derelict vessels, was placed on the National Register of Historic Places as the Mallows Bay-Widewater Historical and Archaeological District. A community partnership committee was formed to draft the national marine sanctuary nomination when the nomination process was revitalized.

The Mallows Bay nomination included support from nearly 150 organizations, agencies, and private citizens. The nomination to have the bay designated as the first National Marine Sanctuary in 20 years was announced by President Obama in 2015. On July 19, 2016, the U.S. Coast Guard’s Sector Maryland North Capitol Region hosted a kayak tour of Mallows Bay in anticipation of its Sanctuary designation. Dr. Susan Langley, the State of Maryland’s Historical Preservation Officer, led the tour. Prior to the start of the tour, Dr. Langley provided an overview of the history of Mallows Bay and explained its unique features and ecological importance.

The primary purpose of the event was to give the U.S. Coast Guard and NOAA staff an opportunity to see firsthand how sensitive the environment is, and the risk a potential oil spill could pose to the site. For example, how and where would booms be deployed, where is there access to this site, where could a staging area be established, what would the response priorities be, and how could wildlife be protected? Brendan Bray and Sammy (Paul) Orlando of NOAA’s Office of National Marine Sanctuaries and Frank Csulak from the Office of Response and Restoration accompanied the Coast Guard and Dr. Langley on the tour. According to Csulak, “Being able to see these derelict vessels up close and actually touch them was impressive.

In addition to the vessels, we enjoyed viewing the large diversity of wildlife, including adult and juvenile American Bald Eagles, herons, egrets, hawks, osprey, turtles, snakes, fish, crabs and submerged aquatic vegetation. Who would have thought such a unique ecological area was just a few river miles downstream of the hustle and bustle of Washington, D.C.? Hopefully, there will never be an oil spill that would impact Mallows Bay, but as a result of our tour, the U.S. Coast Guard and NOAA are better prepared to respond to such an event.” 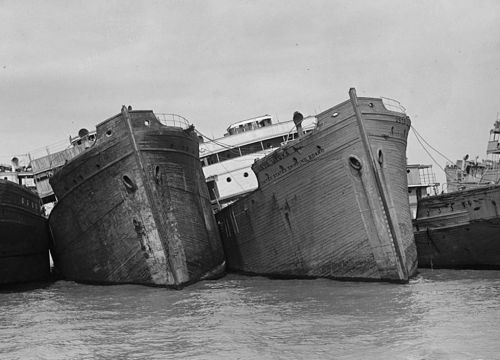 Wooden ships owned by Western Marine & Salvage tied together in 1925, likely on the Potomac or at Mallows Bay. (Library of Congress: National Photo Company Collection) 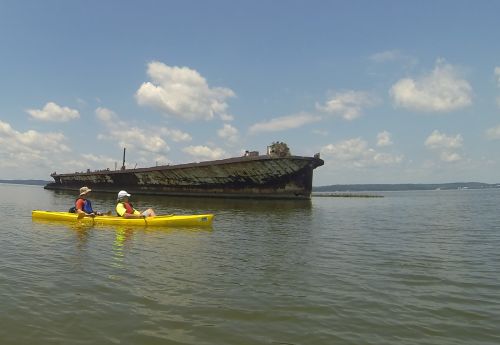