Molasses and Other Weird Things that Have Spilled 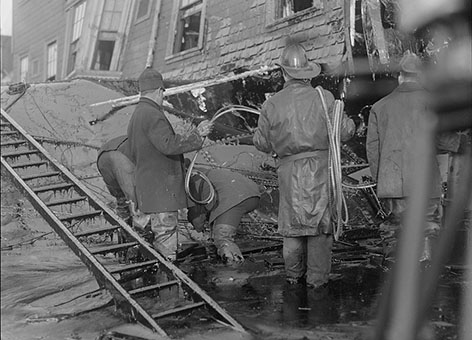 In the wake of the Boston Molasses Disaster of 1919, firemen stood in thick molasses past their ankles as they searched through the sticky debris. (Courtesy of the Boston Public Library, Leslie Jones Collection.)

SEPTEMBER 17, 2013 -- Last week, the Matson Shipping Company reported an unusual spill after a container ship and faulty pipeline leaked 233,000 gallons (1,400 tons) of molasses into Hawaii's Honolulu Harbor. The Office of Response and Restoration's Emergency Response Division has been working with the Hawaii Department of Health's Hazard Evaluation and Emergency Response Office and state and federal partners to assess the large underwater plume of molasses and reduce risks to marine life in the area. Typically we hear about spills of diesel, oil, and chemicals that cause environmental harm. We know these products can be toxic. Molasses, on the other hand, isn't usually considered pollution. Yet, the Hawaii Department of Health has already collected approximately 25,000 dead fish from Honolulu Harbor and Ke'ehi Lagoon, where the molasses spill has spread and smothered life on the sea floor. Although this isn't your run-of-the-mill spill, it's not the first time strange-sounding things have been spilled into the environment—with at times serious consequences.

Too Much to Drink

On October 17, 1814, a fermented vat of beer exploded, causing adjacent storage tanks to spill and pouring approximately 388,330 gallons of beer throughout the poor London neighborhood of St. Giles and neighboring communities. As a result, at least seven people died in this incident, both from drowning while trapped in slum-like basement apartments and from being buried under the flood's debris.

Believe it or not, molasses has been spilled before. On January 15, 1919, a tank holding at least 2.2 million gallons of molasses burst, sending a wall of the thick, brown syrup down the streets of Boston, Mass. Reports indicate 21 people died in this spill and 150 were injured. Boston Harbor was tinted brown for months. Although it wasn't documented in detail in 1919, fish kills were a likely result. The locals described people and animals being trapped, "like by flypaper." Local residents rumor that when the weather is hot you can still faintly smell molasses to this day.

On September 13, 2011, an OR&R Scientific Support Coordinator provided the U.S. Coast Guard with a trajectory for a bundle of telephone poles that were drifting in the Gulf of Mexico. The Coast Guard considered these poles a hazard to navigation and a threat to oil platforms at sea. NOAA's Office of Response and Restoration applies the same oceanographic modeling tools used for oil spill trajectories to determine where huge bundles of logs, lost containers from cargo ships, and abandoned or derelict vessels might end up. In these cases, the debris itself is less of a concern than what it might encounter on its journey. This type of debris poses a huge threat to fishing vessels, fully loaded oil tankers, and even cruise ships. Floating debris is just another example of an unconventional "spill."

Just about anything can be a hazard if it happens to be in the wrong place at the wrong time. For example, saltwater is very common. In fact, about 97% of all water on Earth is saltwater. A spill of saltwater into the ocean (which is also saltwater) is likely to go unnoticed. But if a large quantity of saltwater were spilled into freshwater estuaries and marsh habitat, the spill would likely kill fish, damage vegetation, and impact the long-term viability of the habitat. For example, century-old cypress trees have died and never returned to an area as a result of a saltwater spill into a freshwater system where they were growing.

Today we train our emergency responders for all-hazards. By definition, all-hazards can be any incident or event, natural or manmade, which requires an organized response in order to protect human life, the environment, and property as well as to minimize any disruption of government, social, and/or economic services. Natural disaster such as hurricanes and manmade events such as oil and chemical spills, all require a coordinated response, which is managed under the Incident Command System (ICS) for coordination and stakeholder involvement. While molasses spills aren't a textbook example for training responders, it would be considered an all-hazard threat in situations like Boston's tank failure of 1919 and the spill of 2013 in Honolulu harbor. You never know what might go wrong, which is why it pays to be prepared for anything—even molasses! 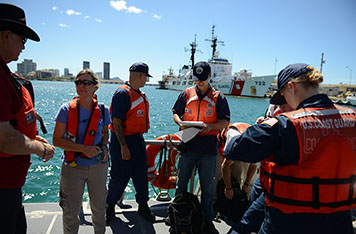 The Coast Guard National Strike Force and personnel from the U.S. Environmental Protection Agency, U.S. Fish and Wildlife, and National Oceanic and Atmospheric Administration head to their first location to monitor depleted oxygen and pH levels in Honolulu Harbor, Honolulu, Sept. 15, 2013. They tested the water at various locations around Honolulu Harbor affected by the molasses spill. (U.S. Coast Guard)
Back to top