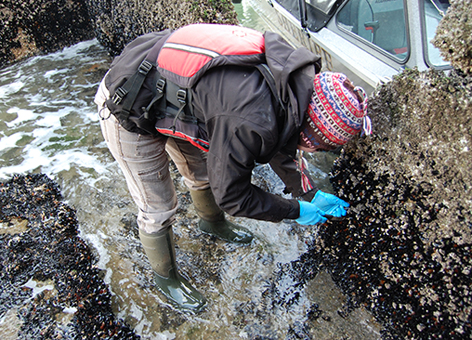 JUNE 11, 2012 — Scraping small black mussels off of slippery rocks in the Pacific Northwest's chilly, wet January weather probably doesn't sound like much fun. However, thanks to the dedicated folks who endure those conditions (and to several other important partners), these mussels and others tested in NOAA's National Mussel Watch Program will keep telling us about water pollution levels and seafood safety for years to come. For example, just last month a fishing boat caught fire and sank near Washington's Whidbey Island. The boat ended up leaking diesel fuel into waters near a Penn Cove Shellfish Company mussel farm, and the company took the precautionary measure of stopping the harvest. NOAA scientists Alan Mearns and Gary Shigenaka rushed to the scene. With help from the shellfish company's co-owner Ian Jefferds, NOAA sampled mussels from six mussel floats and two beach sites and received the lab results of the oil pollution screening a few days later. They confirmed that the mussels had low levels of diesel contamination.

The Washington State Department of Health had shut down all shellfish harvesting in Penn Cove on May 15 and just reopened some areas on June 5. Unfortunately, NOAA didn't have an existing Mussel Watch site in this cove. Nevertheless, thanks to comparable Mussel Watch sites nearby, we have a decent idea of what the contaminant levels in Penn Cove mussels might have looked like before this oil spill. But not long ago this valuable shellfish-monitoring program almost disappeared from Washington waters.

Endangered Research During the past couple years, the Office of Response and Restoration's Alan Mearns has worked together with Dr. Dennis Apeti at NOAA's National Centers for Coastal Ocean Science and Dr. James West at Washington Department of Fish and Wildlife to help revive and expand the National Mussel Watch Program in the state of Washington. 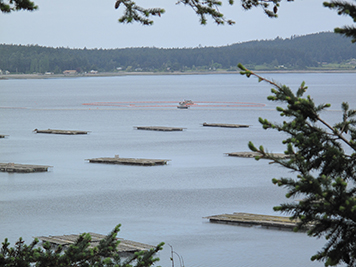 Under NOAA, the National Mussel Watch Program has been monitoring trends in contaminant levels in the mussels (Mytilus spp.) living in Washington waters since 1986. Regionally, this program has been tracking changing levels of pollution at up to 20 different locations in Puget Sound, the Straits of Georgia and Juan de Fuca, and Washington's Olympic Coast. This provides valuable water quality data on background levels and trends of fossil-fuel byproducts and other chemicals. These include about 50 polycyclic aromatic hydrocarbons (PAHs), which are potentially cancer-causing pollutants.

By sampling mussels, we've discovered that parts of Puget Sound have significantly higher amounts of PAHs than anywhere else in the U.S., including heavily trafficked ports like Los Angeles and San Francisco Bay. However, a steady decrease in funding over the past several years threatened to end NOAA's mussel monitoring in Washington and across the country. As early as 2006, Dr. Mearns was working as a volunteer member of the Snohomish County (Washington) Marine Resources Committee to convince the county, the Stillaguamish Tribe, and the Tulalip Tribe to help save the program by funding and coordinating their own local mussel sampling—and had some success by 2006 and 2007. But that alone wouldn't be enough to save the program. In 2009, Dr. Mearns approached scientists at the Washington State Department of Fish and Wildlife, who evaluate trends in Puget Sound’s environmental quality. Chief Eco-toxicologist Dr. West bit at the opportunity to help and got his department involved.

Volunteer Muscle By the winter of 2009–10, Dr. Mearns and his team of federal, state, and local partners were ready to save the program with the help of citizen scientists. These were the hardy volunteers trained to collect mussels using scientific methods around Puget Sound and on the Olympic Coast. Many of these volunteers are part of Washington State University Beach Watchers, a program active in marine education, research, and stewardship. 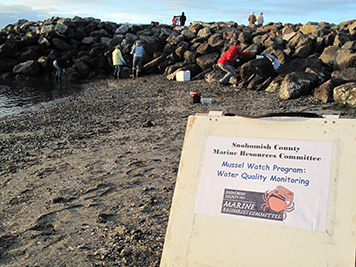 Alongside these volunteers was staff from the Snohomish County Marine Resources Committee and the Olympic Coast National Marine Sanctuary. And of course, Dr. Mearns and his fellow NOAA colleague Debra Simecek-Beatty were out in their rain gear gathering mussels too. From January through March 2010, both old and new collection sites in Washington had been sampled, and the mussels were sent to a NOAA-contracted laboratory for chemical analysis. Then on April 20, 2010, the Deepwater Horizon/BP well blowout caused nearly every qualified pollutant chemistry laboratory in the U.S. to drop everything and support the oil spill response and assessment in the Gulf of Mexico. The Washington samples were ready and waiting but got set aside for more than a year.

Forging Ahead Anxiously awaiting results, but undaunted, Washington Department of Fish and Wildlife began preparing for the next biennial survey in 2012. Thanks to new U.S. EPA funding, they now could expand the Washington program to test mussels at nearly 30 locations, which were sampled this past February. Just last month, they finally received the long-awaited 2010 lab results. Preliminary inspection revealed a new hotspot of oil byproducts in Elliot Bay while several past locations like this disappeared from urban areas. Dr. Mearns has been providing guidance for the data analysis, particularly for the petroleum hydrocarbons (PAHs). 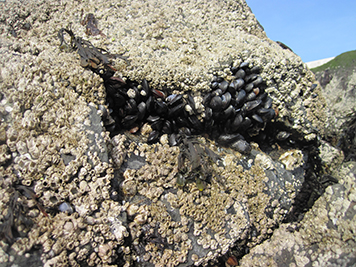 The recent Washington Mussel Watch expansion is now poised to open sampling at 60 sites, including completely new areas, such as the San Juan Islands; to sample during different seasons to pin down big runoff pollution events; and potentially to use a new technique that allows sampling in areas where mussels aren't living already (by placing clean mussels in a bag attached to a buoy anchored at sea). This Mussel Watch triumph of partnerships not only gives scientists and natural resource managers in Washington the ability to track the benefits of pollution management actions, but it also gives them a basis for comparing background contaminant levels in the event of an oil spill like the one near Whidbey Island, Wash. When cleaning up spilled oil, it helps us to know how "clean" any particular place was before oil spilled there. 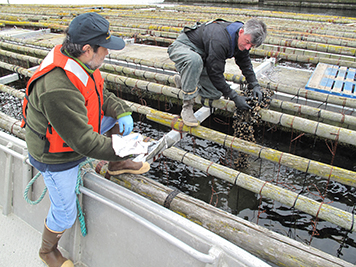 NOAA's Gary Shigenaka and Tim Jones of Penn Cove Shellfish Co. sample raft-grown mussels from one of the numerous culture rafts, five days following the nearby sinking of the derelict vessel, Deep Sea. (NOAA/Alan Mearns)
Back to top