From Natural Seeps to a Historic Legacy, What Sets Apart the Latest Santa Barbara Oil Spill 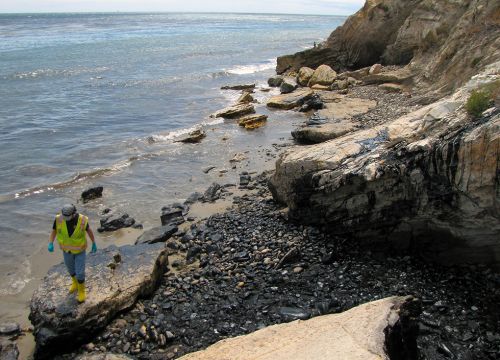 NOAA's Office of Response and Restoration provided scientific support throughout the response, including aerial observations of the spill, information on fate and effects of the crude oil, oil detection and treatment, and potential environmental impacts both in the water and on the shore. Now that the response to this oil spill is transitioning from cleanup to efforts to assess and quantify the environmental impacts, a look back shows that, while not a huge spill in terms of volume, the location and timing of the event make it stand out in several ways. 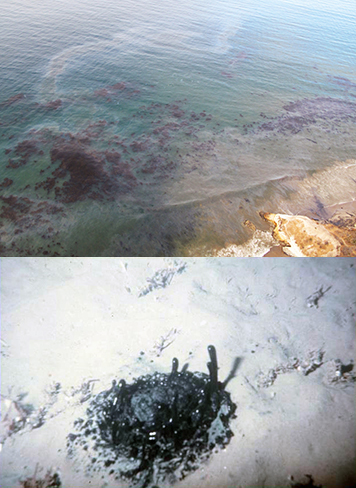 Top: Overflight photo of oil floating near the shore of Refugio State Beach on May 27, 2015. Bottom: The waters off southern California are one area in particular which host hundreds of known, naturally occurring oil and gas seeps, complicating the process of distiguishing the source of oil found after the pipeline spill. (NOAA)

Seep or Spill: Where Did the Oil Come From?

This oil spill, which allowed an estimated 21,000 gallons of crude oil to reach the Pacific Ocean, occurred in an area known for its abundant natural oil seeps. The Coal Oil Point area is home to seeps that release an estimated 6,500-7,000 gallons of oil per day (Lorenson et al., 2011) and are among the most active in the world. Oil seeps are natural leaks of oil and gas from subterranean reservoirs through the ocean floor.

The pipeline spill released a much greater volume of oil than the daily output of the local seeps. Furthermore, because it was from a single source, the spill resulted in much heavier oiling along the coast than you would find from the seeps alone.

A primary challenge, for purposes of spill response and damage assessment, was to determine whether oil on the shoreline and nearby waters was from the seeps or the pipeline. Since the oil from the local natural seeps and the leaking pipeline both originated from the same geologic formation, their chemical makeup is similar. However, chemists from Woods Hole Oceanographic Institution, the University of California at Santa Barbara, Louisiana State University, and the U.S. Coast Guard Marine Safety Lab were able to distinguish the difference by examining special chemical markers through a process known as "fingerprinting."

The affected shorelines include some of the most important cultural resource areas for California Native Americans. Members of the Chumash Tribe populated many coastal villages in what is now Santa Barbara County prior to 1800. Many local residents of the area trace their ancestry to these communities. 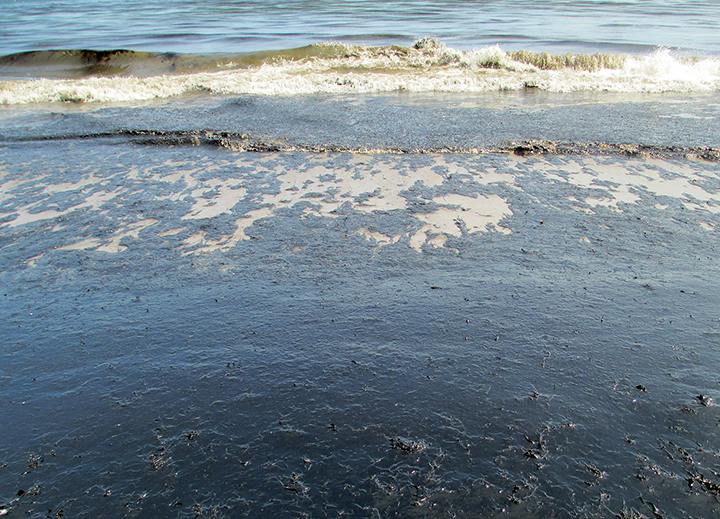 To ensure that impacts to cultural resources were minimized, Tribal Cultural Resource Monitors were actively engaged in many of the upland and shoreline cleanup activities and decisions throughout the spill response.

Bringing Researchers into the Response

The massive Deepwater Horizon oil spill in the Gulf of Mexico in 2010 highlighted the need for further research on issues surrounding oil transport and spill response. As a result, there was a great deal of interest in this spill among members of the academic community, which is not always the case for oil spills. In addition, the spill occurred not far from the University of California at Santa Barbara.

From the perspective of NOAA's Office of Response and Restoration, this involvement with researchers was beneficial to the overall effort and will potentially serve to broaden our scientific resources and knowledge base for future spills.

Another unique aspect of the oil spill at Refugio State Beach was its proximity to the site of one of the most historically significant spills in U.S. history. Just over 46 years ago, off the coast of Santa Barbara, a well blowout occurred, spilling as much as 4.2 million gallons of oil into the ocean. The well was capped after 11 days. 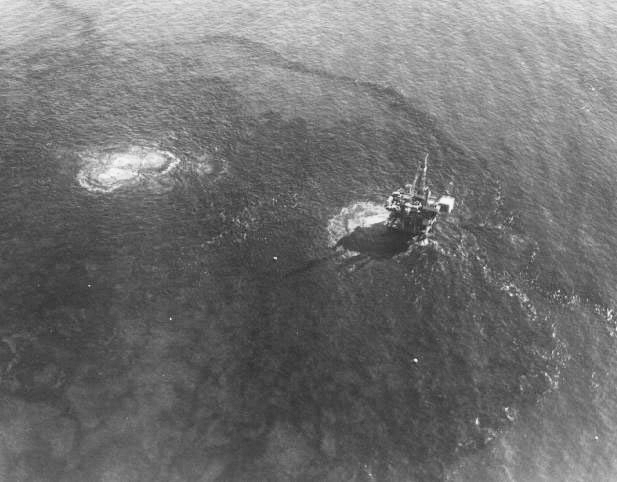 Aerial view of oil rising to the ocean surface (upper left) near the drilling rig, during the Santa Barbara oil spill off the California coast in 1969. (U.S. Geological Survey)

The 1969 Santa Barbara oil spill, which was covered widely in the media, oiled miles of southern California beaches as well. It had such a devastating impact on wildlife and habitat that it is credited with being the catalyst that started the modern-day environmental movement. Naturally, the 2015 oil spill near the same location serves as a reminder of that terrible event and the damage that spilled oil can do in a short period of time.

In order to assess the environmental impacts from the spill and cleanup, scientists have collected several hundred samples of sediment, oil, water, fish, mussels, sand crabs, and other living things. In addition, they have conducted surveys of the marine life before and after the oil spill. The assessment, which is being led by the state of California, involves marine ecology experts from several California universities as well as federal and state agencies.

After a thorough assessment of the spill's harm, the focus will shift toward restoring the injured natural and cultural resources and compensating the public for the impacts to those resources and the loss of use and enjoyment of them as a result of the spill. This process, known as a Natural Resource Damage Assessment, is undertaken by a group of trustees, made up of federal and state agencies, in cooperation with the owner of the pipeline, Plains All American Pipeline. This group of trustees will seek public input to help guide the development of a restoration plan.

*UPDATED 7/10/2015: This was corrected to reflect the fact that only two area beaches were closed due to the spill while 20 remained open in Santa Barbara.