No Solid Mass of Debris from Japan in the Pacific Ocean 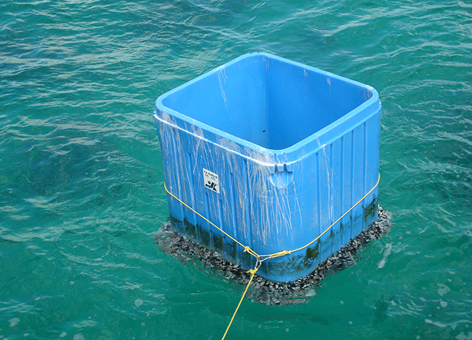 There is no solid island of debris from Japan heading to the United States. Here is an example of confirmed Japan tsunami marine debris arriving in the U.S.: a 4-by-4-foot plastic bin spotted off the eastern coast of Oahu, Hawaii, on September 18, 2012. The barnacles on its bottom are a common open-water species. (Hawaii Undersea Research Laboratory)

NOVEMBER 5, 2013 -- We've heard a concern from some of you that there's an island of debris in the Pacific Ocean coming from the 2011 earthquake and tsunami in Japan. For those of you who may be new to this topic, we'd like to address those concerns.

Here's the bottom line: There is no solid mass of debris from Japan heading to the United States.

At this point, nearly three years after the earthquake and tsunami struck Japan, whatever debris remains floating is very spread out. It is spread out so much that you could fly a plane over the Pacific Ocean and not see any debris since it is spread over a huge area, and most of the debris is small, hard-to-see objects.

We have some helpful resources for you, if you're interested in learning more.

While there likely is some debris still floating at sea, the North Pacific is an enormous area, and it's hard to tell exactly where the debris is or how much is left. A significant amount of debris has already arrived on U.S. and Canadian shores, and it will likely continue arriving in the same scattered way over the next several years. As we get further into the fall and winter storm season, NOAA and partners are expecting to see more debris coming ashore in North America, including tsunami debris mixed in with the "normal" marine debris that we see every year.

NOAA has modeled the debris' movement, and the model shows the overall spread of all simulated debris and an area where there may be a higher concentration of lower floating debris (such as wood) in one part of the Pacific. However, that doesn't mean it's in a mass, and it doesn't tell us how much is there, it just shows there may be more debris there than in other areas. Observations of the area with satellites have not shown any debris.

Even though there's no mass, addressing this debris is very important. NOAA has worked with partners in the states to monitor the debris, form response plans, and try to mitigate any impacts. We'll continue that work as long as necessary. We're happy to answer any questions you may have. Feel free to email us at MarineDebris.Web@noaa.gov.