APRIL 16, 2014 -- Last week, NOAA and partners awarded $4.9 million to EarthCorps for long-term stewardship of restoration sites in Commencement Bay near Tacoma, Washington. The Commencement Bay Stewardship Collaborative is part of a larger investment that will conserve habitat for fish and wildlife and give local urban communities access to the shoreline. EarthCorps, which was competitively selected for this funding, is a non-profit organization that trains environmental leaders through local service projects. The funding will support planning, restoration, monitoring, and maintenance at 17 sites across the Bay. These sites were restored over the past 20 years as part of the ongoing Commencement Bay natural resource damage assessment (NRDA) case. This is the first time that a third party has received funding to launch a comprehensive stewardship program as part of a NRDA case. We hope it will become a model of stewardship for future cases. Commencement Bay is the harbor for Tacoma, Washington, at the southern end of Puget Sound. Many of the waterways leading into the Bay—which provide habitat for salmon, steelhead, and other fish—have been polluted by industrial and commercial activities. NOAA and other federal, state, and tribal partners have been working for decades to address the contamination and restore damaged habitat. One of the sites that EarthCorps will maintain is the Sha Dadx project on the bank of the Puyallup River. The lower Puyallup River was straightened in the early 20th century, leaving little off-channel habitat—which juvenile salmon use for rearing and foraging. The project reconnected the river to a curve that had been cut off by levees. This restored 20 acres of off-channel habitat, and fish and wildlife are using the site. Most of the parties responsible for the contamination have settled and begun implementing restoration. NOAA and its partners are evaluating options for pursuing parties that haven't settled yet. As new sites are added, stewardship funds will be secured at settlement and likely added to the overall long-term effort. This story was originally posted on NOAA's National Marine Fisheries Service Habitat Conservation website. 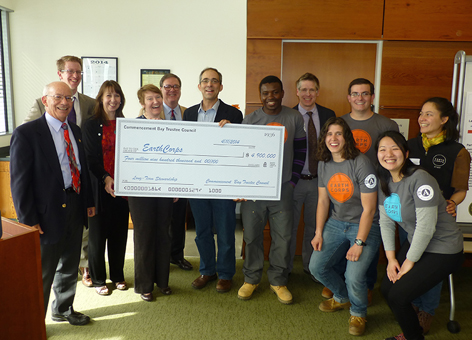 NOAA hands off a $4.9 million check to the nonprofit EarthCorps, which will use the funding for planning, restoration, monitoring, and maintenance at 17 restoration sites across Washington’s Commencement Bay. U.S. Representatives Dennis Heck (WA), Derek Kilmer (WA), and Peter DeFazio (OR) were also in attendance. (NOAA) 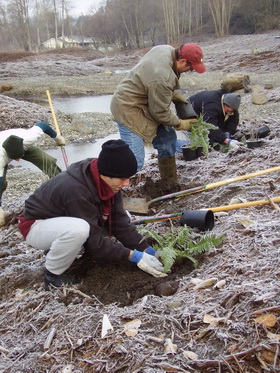 Volunteers restore a site in Commencement Bay. (NOAA)
Back to top