DECEMBER 29, 2014 -- NOAA is offering assistance to a United Nations (UN) team that has arrived in the Sundarbans to serve as part of a larger assessment team providing assistance to the Government of Bangladesh following the release of approximately 325,000 liters (more than 85,000 gallons) of heavy oil.

On December 9, 2014, the oil tanker Southern Star 7 sank near the port of Mongla in the Sundarbans region of Bangladesh after being struck by the freighter M/V Total.

The UN assessment team will be divided into six subgroups: Oiling Extent, Response, Aquatic, Mangrove, Wildlife, and Human/Livelihood. NOAA will lead the Mangrove and Wildlife groups and will advise the other teams as appropriate. After the initial assessment, the UN team hopes to be able to provide more detailed recommendations on protecting and restoring this sensitive habitat.

As part of NOAA's study of oil spill impacts to mangrove shorelines, NOAA has recently updated a report summarizing current research on mangrove ecosystems. Written for those who work in spill response and planning in these sensitive habitats, it aims to help minimize environmental impacts in mangroves when oil spills threaten them. 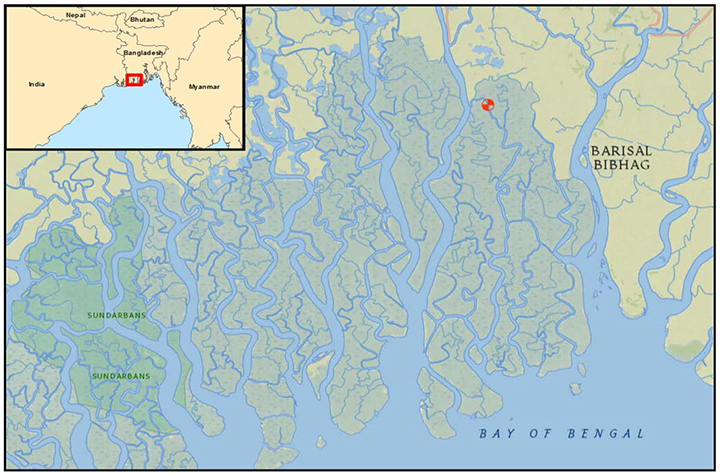 Map of the region where the spill occurred, with the approximate site of the spill denoted with a red symbol. (NOAA) Click to enlarge. 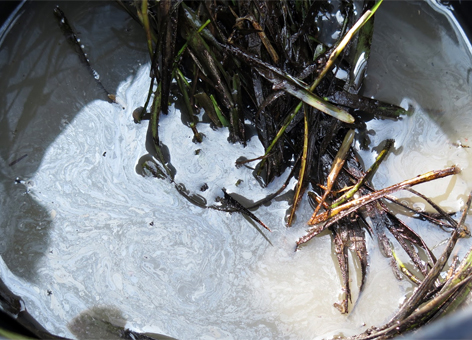 Oiled grass being tested for mobile oil at the site of the Bangladesh oil spill. (NOAA)

Tangles of roots rising out of the water are a classic characteristic of mangroves. These unique coastal forests are made up of a variety of tree and shrub species that have adapted to living in areas where they are alternately flooded and exposed to air. Growing in tropical and semi-tropical environments, mangroves can also withstand high levels of salt and as a result, they are often found in salty waters along deltas, estuaries (which have a mix of salt and freshwater), lagoons, and islands.

However, their maze of aerial roots which allow them to thrive in tidal areas also presents a particular challenge for responders when an oil spill happens near mangroves. Changing water levels in tidal environments means spilled oil has the potential to coat portions of the trees from bottom to top, including the jungle of exposed roots. These specialized roots not only anchor the trees into soft mudflats, but they also absorb nutrients to feed the plants and exchange gases as part of normal metabolic processes.

Mangroves are highly susceptible to oil exposure; oiling may kill them within a few weeks to several months. Lighter oils are more acutely toxic to mangroves than are heavier oils. Increased weathering generally lowers oil toxicity. However, heavier oils can result in substantial physical smothering and coating impacts. Oil-impacted mangroves may suffer yellowed leaves, defoliation, and even death of the tree. More subtle responses include a loss of canopy cover, increased rate of mutation, and increased sensitivity to other stresses.

World map of the mangrove distribution zones and the number of mangrove species along each region. (Credit: Deltares) Click to enlarge.

Mangroves have developed a complex series of physiological mechanisms to enable them to survive in a low-oxygen, high-salinity world. Many, if not most, of these adaptations depend on unimpeded exchange with either water or air. When oil coats mangroves, this ability can be compromised.

The severity of oil's impacts on mangroves is linked to the amount of oil reaching the mangroves and the length of time spilled oil remains near them. The invertebrates and plants that live in and around mangroves recover more quickly from oiling than the mangroves themselves. This is due to the longer time for mangroves to reach maturity. Under severe oiling conditions, mangrove impacts may continue for years to decades, resulting in permanent habitat loss.

If trees die in mangrove communities, most deaths tend to occur in the first six months after being exposed to oil. In fact, obvious signs of mangrove stress often begin occurring within the first two weeks of a spill, and these can range from defoliation to tree death. Research shows seedlings and saplings, in particular, are susceptible to oil exposure.

Cleaning up Oil Spills in Mangroves

Past experience has also taught that such forests are particularly difficult to protect and clean up once a spill has occurred because they are physically intricate, relatively hard to access, and inhospitable to humans. In the rankings of coastal areas in NOAA's Environmental Sensitivity Indices, commonly used as a tool for spill contingency planning around the world, mangrove forests are ranked as the most sensitive of tropical habitats.

Mangroves offer a variety of benefits to the surrounding ecosystem, benefits which are jeopardized in the case of oil spills. In particular, mangroves can help protect water quality, especially around coral reefs. Their massive root systems somewhat filter the water, trapping sediments and some types of contamination with them.