FEBRUARY 20, 2015 -- On February 16, 2015, a CSX oil train derailed and caught fire in West Virginia near the confluence of Armstrong Creek and the Kanawha River.  The train was hauling 3.1 million gallons of Bakken crude oil from North Dakota to a facility in Virginia.  Oil coming from the Bakken Shale oil fields in North Dakota and Montana is highly volatile, and according to an industry report [PDF] prepared for the U.S. Department of Transportation, it contains “higher amounts of dissolved flammable gases compared to some heavy crude oils.” Of the 109 train cars, 27 of them derailed on the banks of the Kanawha River, but none of them entered the river. Much of the oil they were carrying was consumed in the fire, which affected 19 train cars, and an unknown amount of oil has reached the icy creek and river.  Initially, the derailed train cars caused a huge fire, which burned down a nearby house, and resulted in the evacuation of several nearby towns. The evacuation order, which affected at least 100 residents, has now been lifted for all but five homes immediately next to the accident site. The fires have been contained, and now the focus is on cleaning up the accident site, removing any remaining oil from the damaged train cars, and protecting drinking water intakes downstream.  So far, responders have collected approximately 6,800 gallons of oily water from containment trenches dug along the river embankment. The area, near Mount Carbon, West Virginia, has been experiencing heavy snow and extremely cold temperatures, and the river is largely frozen. Some oil has been observed frozen into the river ice, but testing downstream water intakes for the presence of oil has so far shown negative results. NOAA has been assisting the response by providing custom weather and river forecasting, which includes modeling the potential fate of any oil that has reached the river. The rapid growth of oil shipments by rail in the past few years has led to a number of high-profile train accidents. A similar incident in Lynchburg, Virginia, last year involved a train also headed to Yorktown, Virginia. In July 2013, 47 people were killed in the Canadian town of Lac-Mégantic, Quebec, after a train carrying Bakken crude oil derailed and exploded. NOAA continues to prepare for the emerging risks associated with this shift in oil transport in the United States. Look for more updates on this incident from the U.S. Coast Guard News Room and the West Virginia Department of Environmental Protection. 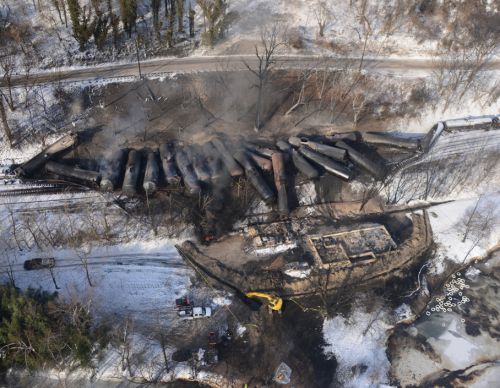 On Feb. 18, 2015, response crews for the West Virginia train derailment were continuing to monitor the burning of the derailed rail cars near Mount Carbon next to the Kanawha River. The West Virginia Train Derailment Unified Command continues to work with federal, state and local agencies on the response efforts for the train derailment that occurred near Mount Carbon on February 15, 2015. (U.S. Coast Guard) 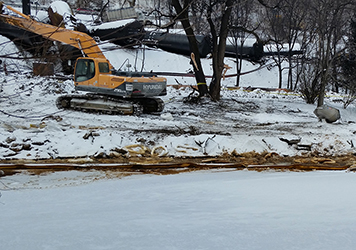 Some oil from the derailed train cars has been observed frozen into the river ice, but no signs of oil appear downstream. (NOAA)
Back to top