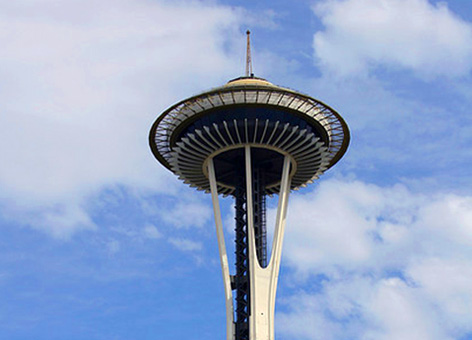 MAY 25, 2012 — This June, Seattle, Wash., is hosting a city-wide, month-long festival celebrating science, technology, and innovation in commemoration of the 50th anniversary of the Seattle World's Fair. If you're going to be in the Seattle area, you can find an overview and schedule of all the planned activities at seattlesciencefestival.org. The festival has three components: Science EXPO Day, Science Festival Week, and the Science Luminaries Series. NOAA is playing a part in all three, starting with the kick-off event on June 2.

Science EXPO Day, on Saturday, June 2, 2012, at the Seattle Center will feature more than 130 exhibitors with interactive activities, demonstrations, and science experiments. As part of a larger NOAA exhibit at Science EXPO Day, the Office of Response and Restoration (OR&R) will showcase how we model oil spills by demonstrating our GNOME software application. (If you can't make the Science EXPO, you can still download the GNOME model for free and try it yourself!) This model also has been valuable in developing possible scenarios of how debris from the 2011 Japan tsunami has traveled across the Pacific Ocean, towards Hawaii and the North American West Coast. Experts from the NOAA Marine Debris Program will be on hand to discuss ongoing efforts to address problems the debris could cause in the water and after landing on shore.

NOAA will celebrate Science Festival Week with an open house for the public on Friday, June 8, 2012, from 12 p.m. to 8 p.m. NOAA staff will conduct a variety of guided tours through the Sand Point and Montlake campuses, giving visitors a chance to see first-hand the work that we do to protect endangered species, restore coastal and riverine habitat, forecast the weather, and more, right here in Seattle. The public can hear about these NOAA activities straight from our scientists and ask questions as they peek behind the scenes at how we study the ocean and atmosphere. The Office of Response and Restoration's "War Room," a hub of activity when an oil spill occurs, will be one of the highlights. From there, our spill modelers will demonstrate the tools they use to create animated maps forecasting where oil might go to help responders during oil spills such as the recent Deepwater Horizon/BP incident in the Gulf of Mexico. There will be lots of maps, artifacts, and photos, along with experts on hand to discuss our work on oil spills, marine debris cleanup, and environmental restoration. Also, twice that day, OR&R's Nir Barnea will join NOAA scientists Vasily Titov and Mark Koehn for a discussion of the 2011 Japan tsunami and the resulting marine debris. See NOAA Open House for more details.

The Science Luminaries Series consists of lectures and panel discussions by some of the nation’s greatest scientific minds, such as theoretical physicist Stephen Hawking and astronauts Bonnie Dunbar and George "Pinky" Nelson. Please visit the Science Luminaries Series for detailed schedules and information. NOAA's Dr. Kathryn Sullivan, a distinguished scientist (as well as a former astronaut) who serves as Assistant Secretary of Commerce for Environmental Observation and Prediction and NOAA Deputy Administrator, will be one of the featured speakers. Dr. Sullivan will share the stage on Wednesday, June 13, 2012, with Dr. Anthony Janetos, Director of the Joint Global Change Research Institute at the University of Maryland and Pacific Northwest National Laboratory, and Dr. Nicholas Bond, Washington State Climatologist and University of Washington and NOAA Atmospheric Scientist, to discuss climate change and what it could mean for the future. This event will take place at Kane Hall on the University of Washington campus at 7:30 p.m. For details on this exciting presentation, see Conversations About Our Changing Planet: Observations, Models and Implications. Space Needle photo above used under a Creative Commons Attribution 2.0 Generic license.