POSTED: MAY 22, 2015 | UPDATED: MAY 25, 2015 -- On May 19, 2015, NOAA was notified of a 24-inch pipeline rupture that occurred earlier in the day near Refugio State Beach in Santa Barbara County, California. A reported 500 barrels (21,000 gallons) of crude oil flowed from the shore side of Highway 101 into the Pacific Ocean. NOAA's Office of Response and Restoration is continuing to respond to the oil spilled into the marine environment. The source was secured. The remaining oil in the ocean consists of patches, streaks, and tarballs of various sizes and thicknesses, from both last week’s spill and natural oil seeps in the area. The Office of Response and Restoration's Jordan Stout, NOAA Scientific Support Coordinator, has been on-scene throughout the response. OR&R has been providing overflight observation of the spill, information on fate and effects of the crude oil, potential environmental impacts both in the water and on the shore, and observation and data management for the Natural Resource Damage Assessment. Cleanup efforts continue along the beach, in the water, and inland. According to the Unified Command, "The responsible party, Plains All-American Pipeline, is working closely with the Coast Guard, U.S. Environmental Protection Agency, National Oceanic and Atmospheric Administration, California Department of Fish and Wildlife, and Santa Barbara Office of Emergency Management." According to the Refugio Response Joint Information Center website on May 24, 2015:

The spill has harmed some area wildlife. The Refugio Response Joint Information Center reported on May 24 that, "There are nine brown pelicansand one Western Grebe that have been recovered and are being treated by wildlife specialists. Five pelicans have died. One sea lion impacted by oil was recovered and one has died. A dolphin that was recovered dead on Friday has undergone a necropsy; no visible oil was found on the animal. A second dolphin was recovered Saturday and is undergoing a necropsy to determine the cause of death. Updates will be available when it has been completed. There have been a large number of invertebrates affected by the oil, though due to complexities in counting and staffing constraints, it is unknown how many have been impacted." The Refugio and El Capitan beaches will remain closed to the public until June 4, 2015. For further information, see the Joint information Center website: Refugio Response Information. 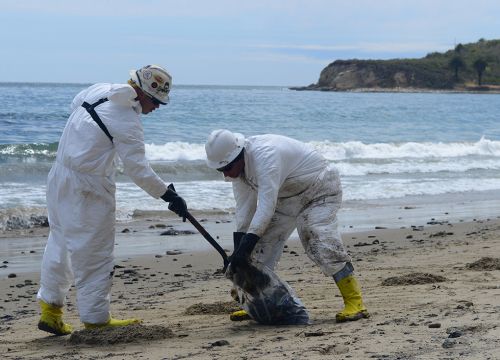 Clean up teams used shovels and their hands to gather affected soil and ocean debris along oil impacted beaches north of Santa Barbara on May 21, 2015. (U.S. Coast Guard) 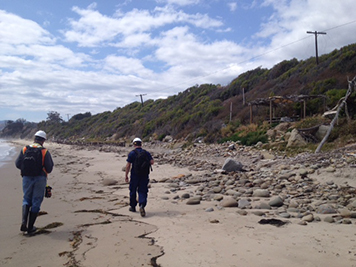